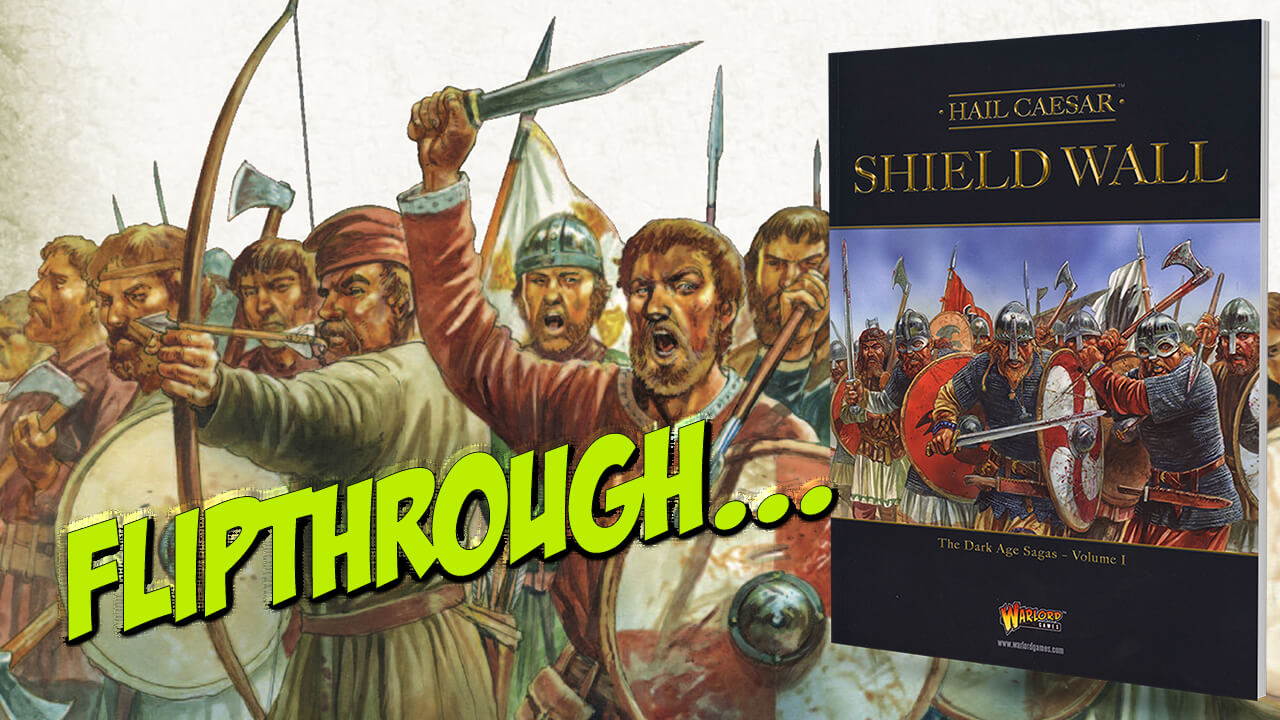 The book begins with a useful potted history of the period being covered with the major players being outlined, before going on to their strategies, weapons and tactics.

The books author clearly felt that in order to experience realistic “Sub-Roman” combat (that’s 400 – 600AD), rules for small scale warfare needed to be included in the supplement. Therefore rules have been borrowed from the HC supplement ‘Rome’s Dacian Wars’, tweaked and included here between pages 16 and 27 to provide readers with what is effectively a new game which operates outside of the parameters of Hail Caesar. These are skirmish level rules for around twenty individually based figures per side.

After this interlude into skirmish gaming the book picks up with more history on the Hept-arachy period between 600 – 800AD.

We then have four pages of Hail Caesar Special Rules for the Dark Ages.

Whereas the Army Lists in the main Hail Caesar rulebook aim to provide for a clash of large armies, the new supplement adds a level of historical ‘realism’ by categorizing the units as large Warbands led by a Warlord, as opposed to the ‘true’ military forces of the later Medieval eras.

A change to the leadership rules means that each division must be led by a commander, with any ‘Royal’ division being led by the General or King. Divisions are noted as being at least four non-skirmisher units, and leadership is a little different, with divisional leaders having a leadership of 7 and a fighting value of 2.

Generals or kings are base lined at leadership 8 and fighting value of 2. This has been done to reflect the difficulty of command and control in the Dark Ages, although these values can be adapted by scenario rules.

The Dark Ages were also about direct, heroic leadership between kin and clan, and the rules specify that each commander must be attached to a unit, although they still have the ability to command others within 12”. If the commander or general is lost, it becomes a major event, so units must roll to assess how they react.

The new ‘Shieldwall’ rule replaces the Close Ranks Rule found in the Hail Caesar rulebook. It takes a turn of remaining stationary to enter Shieldwall, a typically Dark Age strategy, which means the force moves at half speed and deducts 1 from their combat values. However, they gain a +1 to their morale and break test rolls.

In the new rules, religion also plays its part. A warband or army is either Pagan or Christian. Depending upon the scenario rules, the general’s unit receives a free religious icon, which may be chosen from a simple list and provides a bonus to certain dice rolls.

Following these new rules We then have a simple campaign system which contains detailed descriptions and maps for 15 battles which may be run as one-off scenarios or as part of a campaign using the rules included.

Many classic battles of the Dark Ages are covered here including at the beginning of the period King Arthur’s famous stand at Badon Hill, and at the end the mass multi-army pile up of Brunanburh in 937AD.

The Book concludes with army lists for: The Early Saxons, the British, Picts, Gaels, Vikings, Late Saxons and Irish-Norse.

The new Shieldwall supplement serves to bring more than a touch of the Dark Ages to the Hail Caesar rules system. It intentionally scales back the overall ‘size’ of the armies but retains the best aspects of the core rules: getting plenty of toys on the table and finishing the game in time for a visit to the pub.

The balance of historical insight and practical gaming rules is well thought out, with a good account of each type of warrior. In addition, the inclusion of the 7 army lists enables you to field warbands from most of the major nations of the era.

This is the first of two volumes dealing with the Dark Ages, with the yet to be released Volume 2 detailing the period from 1000 to 1066 AD.

Overall, this is a useful resource for those looking to game one particular period in more detail with added ‘flavour’.