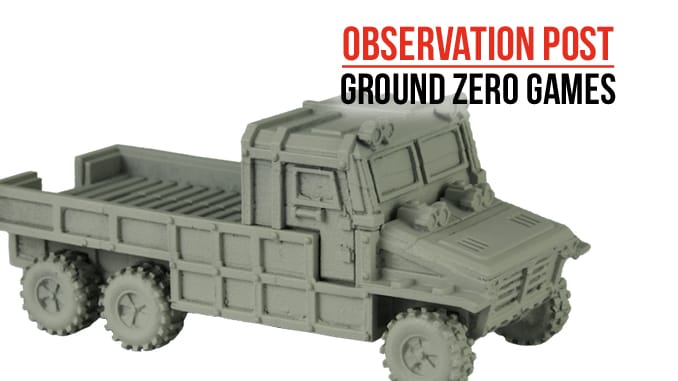 The Ground Zero Games 15mm Stargrunt range is just part of the excellent ranges of figures from this venerable company. These really are some of the best 15mm sci-fi figures on the market, whether infantry, vehicles, flyers or more. However, owner Jon Tuffley never rests on his deserved laurels, and has begun to add updated versions of his sculpts from the Stargrunt ‘universe’ to his catalogue.

These new figures are the first 15mm troops produced where the actual infantry personal weapons have been cast from 3D designs, though the actual figures themselves are still traditionally (and superbly) sculpted to ensure that they retain all the style and character of the other 15mm forces.

These are just one example of the all-new figures, still in a similar style to the older NI Hardsuit Infantry (packs Z06, Z07 etc) but with greatly improved posing, detail and are just a little bit larger; the original Zxx code figures were quite early releases in the SG15 range. The start of this new redesign means that GZG have taken the opportunity to rectify that and bring the range up to the level of more recent sculpts, not only in height but also in fine detail. The overall design style of the figures is still very much in keeping with the older versions, however, and it is perfectly possible for those whom already have units of the earlier designs to incorporate the new releases into their existing forces as Heavy Infantry in Assault Hardsuits.

Ground Zero are also one of the few manufacturers who offers a ‘combined arms’ approach to each of the Stargrunt ‘universe’ factions. From infantry to armour, ground transport to ground attack flyers, they offer it all. To illustrate part of this approach, we’ve picked out this Light truck (6 wheel) flatbed closed-cab extended-length version of the company’s recently released light jeeps. It’s ideal as a cargo transport, prime-mover for weapons teams or (with the addition of a weapon and gunner in the flatbed) as a “technical” for lower-tech forces.

Its worth mentioning that the fully realised ‘universe’ which underpins pretty much every sci-fi product from GZG covers not only far-flung future infantry combat using the Stargrunt rules but also combat between spacecraft using the excellent Full Thrust. There are also 28mm figures for use with Stargrunt and a host of other miniatures that fit into and around the core ranges, including the Moongrunt range which covers combat between Near Future nations on our own world’s satellite. Always helpful, and always adding new or re-vamped products, the Ground Zero team are some of the nicest people you can deal with and have all sorts of items to please the most jaded of gamers.