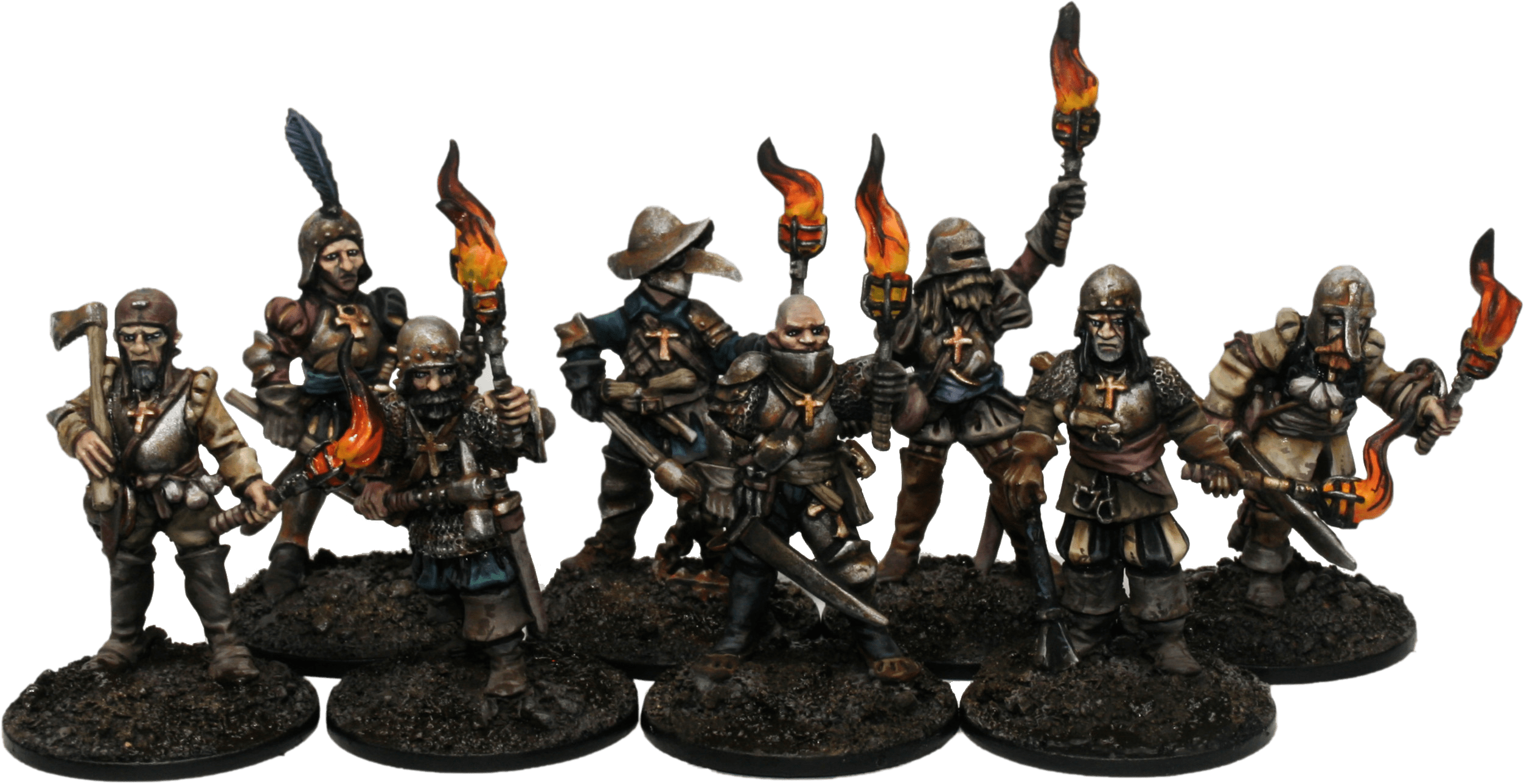 These are new models for SAGA Age of Magic, from Gripping Beast. The first of The Order Militant march their menacing way onto your tabletop at 28mm scale, cast in metal, and (with the exception of three two-part models) as one-piece models.

Sculptor Matthew Bickley has excelled himself – these are some seriously characterful creations. The eye’s instantly drawn to the faces, before traveling around the other treats that the sculpts offer. As you can see from Gripping Beast’s studio paint jobs below, in the hands of a good painter these look rather special.

Each model has an individual flair, with their own flavour of witch-walloping weaponry, from stabby, to shooty, to squashy. One thing is universal – these grim gentlemen all respect the cleansing flame, wielding torches that burn with dancing fire. Some standout details are the buckler shields and logical placement of sturdier bracers on some of the witch hunters’ weapon wielding arms.

The models and their characterful faces put us in mind of Paul Kidby’s art for Terry Pratchett’s Discworld series, especially the City Watch of Ankh Morpork.

… only without any of the humour that was found in Sir Terry’s work. This is a grim group. Look at these details – those are faces that have seen some harrowing sights.

If you’re a regular visitor to our Prime articles, you’ll be familiar with the spins that accompany them, showing models from all angles. Making these spins takes quite a bit of time – building the models, spraying them with primer, taking photographs from multiple angles, balancing the tone and contrast of the images, cutting them out from the background, and finally stitching them together with digital magic to make the spin – but, dear reader, you’re worth it.

These time requirements do mean that we can’t do a spin of every model (except in the most exceptional circumstances) and especially not when office tech guru Mark’s about to head off on his holidays. Which is giving me a grump, because each and every one of these new models from Gripping Beast deserves to be seen in 360 degrees. How can we possibly pick just a few?

These are great models and an exciting addition to SAGA Age of Magic, but there’s also huge potential to mix these in with other ranges and historical or fantasy settings with just a little bit of extra work.

Now, if you’ll excuse us, we’ve got some heretics to hunt!