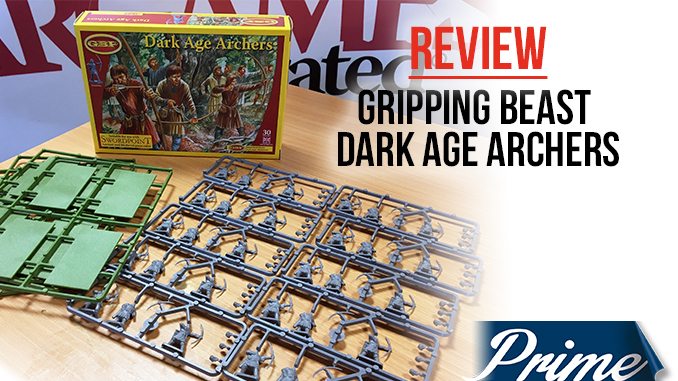 Plastic box set number seven from Gripping Beast (or more correctly, Gripping Beast Plastics) is a set of ‘Dark Age Archers’. Following on from other boxed sets like ‘Arab Spearmen’ and ‘Dark Age Warriors’ GBP are clearly looking to cover as many bases as possible (literally!) with this release, and why not, a 5th – 11th Century archer in England would have looked similar enough to one in Russia, at least from a 28mm perspective. The paint job can be all that is required to add regional ‘colour’ e.g. plaid trousers.

The set contains ten identical sprues with each sprue housing three different figures. It’s tempting to have a gut reaction of ‘that’s not much variety!’, but then that’s the point. Gripping Beast make loads more archers for this period in metal, so the aim of the plastic set is to provide you with very economical (60p per figure) generic figures for your units, which you can add more variety to with metals. That is certainly what I will do with my set. Although the figures are billed as ‘suitable for Swordpoint’ I am going to use the figures as Bidowers in my Viking Lion Rampant force (see WI331) and add in some of the new GB Viking Archers.

The three figures themselves are armed with self-bows (which scaled up would measure about 5’ in length), as well as quivers filled with arrows and short knives. Two are two piece figures drawing their bows, the third is a three-piece with bow lowered. The three different heads are separate pieces. The box also contains sixteen 80mm x 40mm bases.