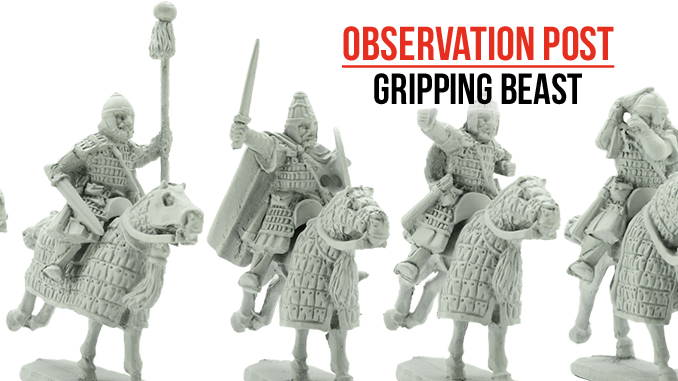 Gripping Beast continue to produce new factions for their incredibly popular “Saga” skirmish game, this time looking to those implacable enemies of Byzantium, the Avars.

Included in our review bundle are; the High Chieftain command pack, two further command packs, two packs of Avar nobles with spears and two packs of mounted archers. The High Chieftain comes with a standard-bearer and bodyguard whilst the two other command packs contain just a standard-bearer and General. These are all armoured warriors, with decorated helmets, swords and round shields. I particularly liked the Chieftains standard bearer, who has his helmet under his arm revealing his distinctive Avar hairstyle.

The nobles are depicted in the first pack with spears upright and in the second wielding them overarm in full charge, so you can decide which way you want to represent them on the table. Whilst I am drawn to the upright spears as they reveal more of the warriors armour and may be a little easier to paint, the overarm poses are very dynamic and when placed on charging horses would look great. Again, all these troops have plain round shields with just a central boss, allowing you free rein to paint creative shield designs. For the less talented, or more lazy, I am sure that suitable transfers will not be far behind.

The final two packs are the lightly armoured horse archers, the first pack depicted reaching for their arrows, bows by their side, and the second pack in a firing pose. These miniatures come with a separate hand holding the bow, with a pin and socket join to glue the hand in place. I assume this has been done to allow the bow to be cast more finely than it would be if cast on the model, but the hands fit neatly into the join with no issues so it is welcome compromise to create a more dynamic miniature.

It is just worth making a special mention about the horses for this range. Many years ago when I first started buying miniatures from Gripping Beast I was always a little disappointed with the horses, which sometimes looked a little chunky. I am happy to report that any reservations I had were dispelled, with all of these models looking well animated and perfectly proportioned. With this range you can also ask for your warriors to come mounted on armoured or unarmoured horses. The armoured variety wears either full or half barding, which consists of the linked metal plates common amongst steppe armies. The horses tails are tied with decorative ribbons and the bridles are also decorated with tassels, adding yet more colour to these already colourful troops. The unarmoured horses are in dynamic galloping poses and the bridles and decorated leatherwork are, again, decorated with tassels and ribbons.

Overall, this is a great range of steppe warriors to use either as a new faction in your “Saga” game or to begin building your army to fight the Byzantines. All the troop types you need are here and there is enough variety in clothing and head gear amongst the miniatures in each pack that you can maintain the armies irregular appearance. If you want to crush your enemies, see them driven before you and hear the lamentation of their women, this is the army for you.