Grey For Now – Test of Honour: Samurai Warband and extras 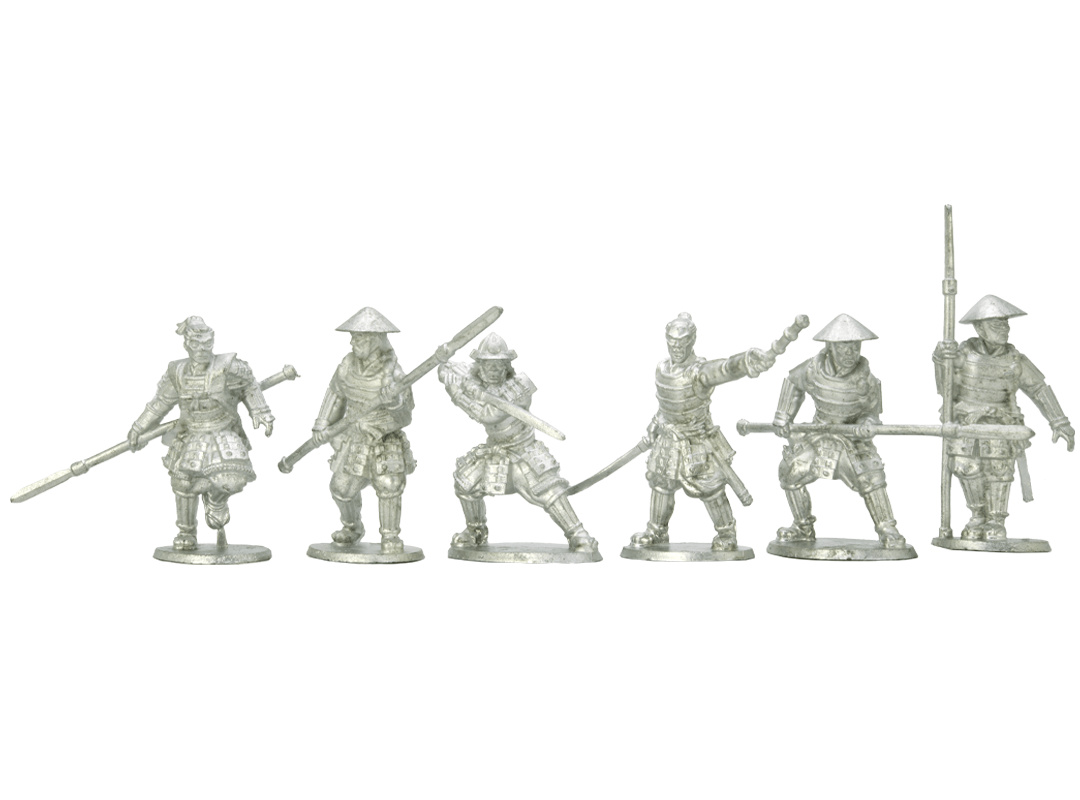 The latest release for skirmish game Test of Honour is a set of new Samurai and Ashigaru figures. The Samurai Warband box set contains eight fine-looking metal figures, the 18 cards you’ll need to use them, MDF bases, and it costs £35 ($50 US). There are two additional packs – Ashigaru Spearmen (£12 ($17 US)) and missile-armed Ashigaru (£15 ($21 US)) – which come with their own cards and multi-bases.

Each figure in the Warband is one part (including a small metal base) but the Ashigaru have an individual sashimono to go onto their backs. The scale is certainly larger than many ancient Japan ranges – figures at their most upright are somewhere around 34mm from underside of foot to eye – but the proportions feel more realistic than heroic so you might be able to slide them into your army if you want to take them outside of your Test of Honour gaming.

We were lucky enough to get hold of designer Graham Davey’s painted versions of these figures so shiny colour spins accompany this article but it’s worth focusing on just how good the figures actually look in their raw, unpainted, pure metal form too. We emphasise the word pure because that’s a good way to describe the casting quality here. The material is extremely shiny and despite quite a lot of projecting parts (particularly on the Ashigaru) ours came unbent and solid. There’s barely a mould line to be found and other than some basic feeds clean-up will be a doddle.

These are far from basic sculpts. Although they’re on a generally flat plane they come in really varied and dynamic poses. Included are five Ashigaru in medium armour – three with yari (spears) in different stages of advance and attack, one with teppo (musket) more at rest, and one with yumi (bow) at a crouch.

This isn’t the first Samurai set from Grey For Now. The Bushi Buntai one has been available for quite a while but these are a step up in quality. We particularly like how impressively sizable the bow is in the new design and for a skirmish game, ideally, each of the figures looks more like an individual. They’ve been posed well, with far more drama in their stances than most other single-part figures manage.

Bringing character to proceedings is a Kogashira with a katana and baton and two Samurai in heavier armour. As you’d want from characters, these Samurai are two of the best figures in the set. Their poses show power and confidence, very clearly defining them as the elite of the group. One wields a katana, the other a yari.

To bulk out your warband are the extra packs. The spearmen set has three alternately posed men with yari, while the ranged group is a mix of two more bowmen and two more muskets. If you add these to the figures in the box set you’ll have men covering all weapon types and at varied positions.