Greece 1941 – The Death Throes of Blitzkrieg 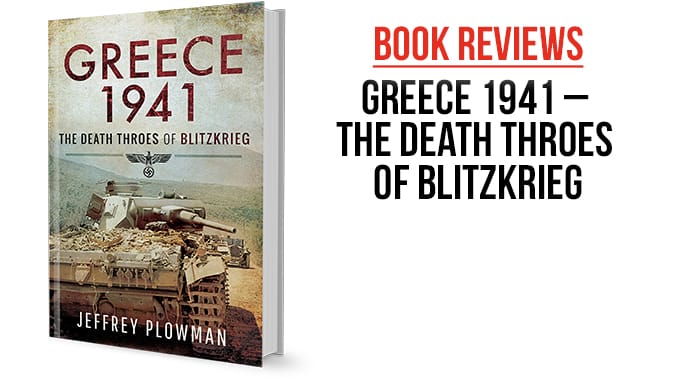 Jeffrey Plowman’s Greece 1941 – The Death Throes of Blitzkrieg offers a riveting—and sometimes harrowing—account of Germany’s three-week campaign to capture Greece in April 1941. It focuses on the understrength British and Commonwealth expeditionary force (W Force) committed to an ill-conceived mission lacking critical coordination with its Greek allies. As for the Germans, it relates how their strong numbers and combinations of infantry, armor, artillery and aircraft faced difficult terrain and a limited road network which advantaged the defenders at critical chokepoints. Within the hardback’s 225 pages, readers will find seven helpful maps and 50 black & white photographic plates to supplement the text. Further information can be found in several appendices, including compositions of Allied and German forces, commander biographies, detailed deployment and evacuation data for British/Commonwealth expeditionary units, British tank losses by unit/date and casualty figures. A glossary provides an explanation of British Army, German Army and Waffen SS ranks as well as German terminology; the index is categorized by names, places, units and operations.

The narrative establishes the context for the German invasion of Greece, highlighting old Greco-Italian grudges, divided Balkan states pressured to cooperate with an ascendant Nazi Germany and overstretched British/Commonwealth forces attempting to put out too many fires in the Mediterranean. Although the political background to the campaign—with all the handwringing, deception and blunders—is fascinating enough, the book quickly engrosses the reader in the action. Bolstered by opposing battle reports and personal accounts, the narrative captures the desperate situations the assorted British, Australian and New Zealand units found themselves as they fought a withdrawing battle against advancing Germans. The Germans hardly take a cakewalk as they repeatedly face destroyed bridges, blocked roads and exposure to heavy fire in narrow passes and river crossings. Mountains, swamps, poor roads, rain and late snows complicate matters and add to everyone’s misery.

Greece 1941 makes for a great introduction to an often-overlooked World War II subject. For wargamers, it’s a treasure trove of inspiration for tabletop scenarios, large and small.