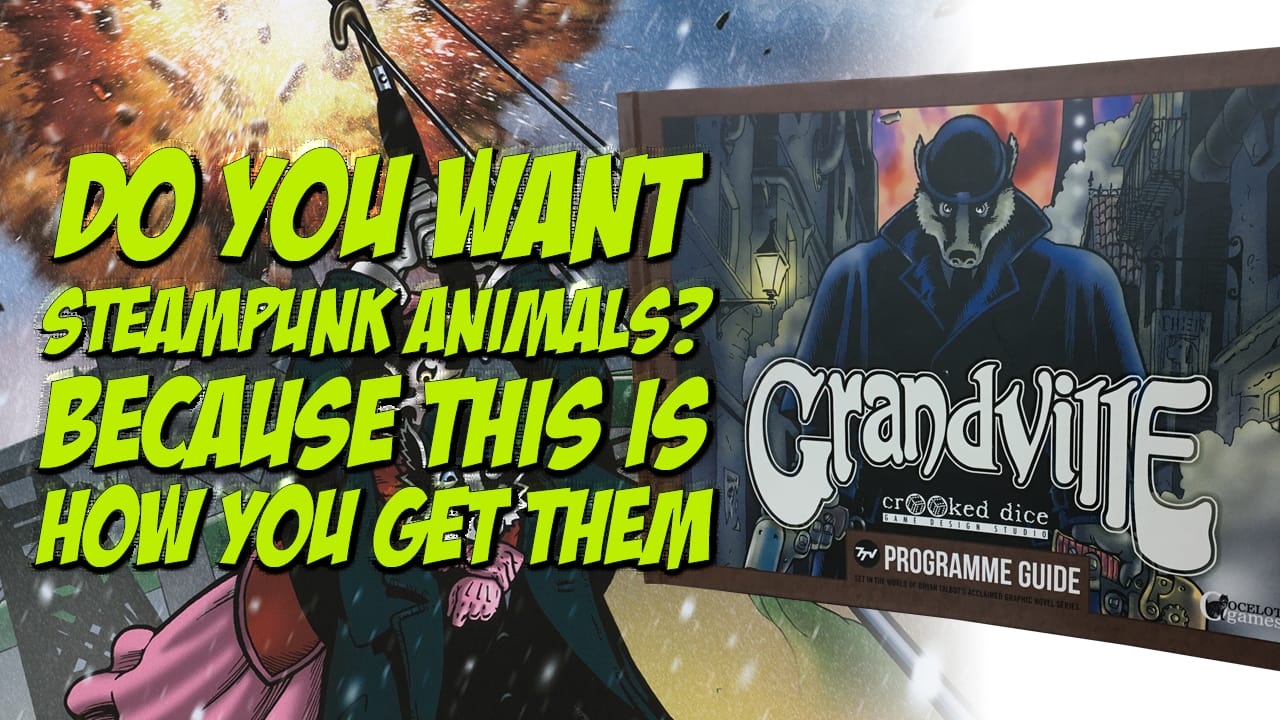 Ocelot Games and Crooked Dice Game Design Studio have come together to create Grandville, a ‘Programme Guide’ which allows players into the comic book universe of Bryan Talbot’s internationally acclaimed graphic novels.  This is an 80-page, hardback book that provides rules and support material to run the games, plus a number of new ideas for those whom already game using the 7TV ‘stable’ of products.

The world of Grandville may be known to the majority of the more discerning reader of comic books, but perhaps not to everyone.  The book therefore begins with an introduction to the comic book and game universe, an alternate history where anthropomorphic animals and steampunk exist side by side with an oppressed humanity in a ‘modern’ age which looks more like the late Victorian / early Edwardian era. The key aspects of this world are outlined in just enough detail to allow for flexibility in your gaming, whilst a handy timeline is full of scenario ideas.

The background ruleset to this Progamme Guide (setting and rules supplement combined) is Crooked Dice’s 7TV. To that end, the layout of the book follows the familiar layout of many a Crooked Dice product, with some ‘extras’ for regular players. The first ‘extra’ are some new optional rules to include in this and any other 7TV setting, Injury Rules where a player decides to take an injury card at random rather than suffering any loss of Health points.

In the game, a group of figures is called a ‘Cast’, to reflect the cult TV and movie backgrounds which may be used. These Casts are divided into Stars, Co-Stars and Extras, again like TV, movies or, in this case, comic / graphic novel format. The book outlines the main ‘dramatis personæ’ of the setting, including new optional character types, collections of Units and new types of largely steam powered vehicles. The beauty of the 7TV rules system is, if your opponent agrees, all of these may be used in any setting where the 7TV 2nd Edition rules are being used – the ‘game balance’ comes built in.

There are 8 scenarios, called ‘Episodes’, outlined in this supplement. These are very well written, have clear set up and victory conditions, and also have options using the ‘Director’s cut’ version which add additional nuancing. More importantly, like the whole book, the use of Bryan Talbot’s evocative artwork really adds to what is presented.

One of the most useful aspects of any 7TV supplement is the inclusion of photocopiable resources, and Grandville is no exception. Here we have character profile cards, cards which reflect the game stats for new vehicles, the afore-mentioned Injury cards, the unique Gadget cards and the newly themed Countdown Cards, all designed to be copied, cut out and used. Of course, as it says in the rules, one can copy and cut, or simply buy the special, pre-printed cards available from Ocelot Games and Crooked Dice.

To me, this is a great looking book which is really evocative of a series of graphic novels I have read. The rules and level of research shown here is of a high standard, reflecting that this is a labour of love and some passion. In many ways, it’s a perfect blend of fact and fandom, with plenty of ideas for use within this game universe and as options across all those explored using the 7TV rules system. Yes, it’s a little ‘micro-niche’ for those that haven’t come across Bryan Talbot’s work, but there is a lot on offer here for those gamers as well – anthropomorphic animals with guns, a host of steampunk concepts, a complete new timeline to explore and a collection of adventure hooks, which are at their root generic enough to fit into a number of settings. Well worth a look.