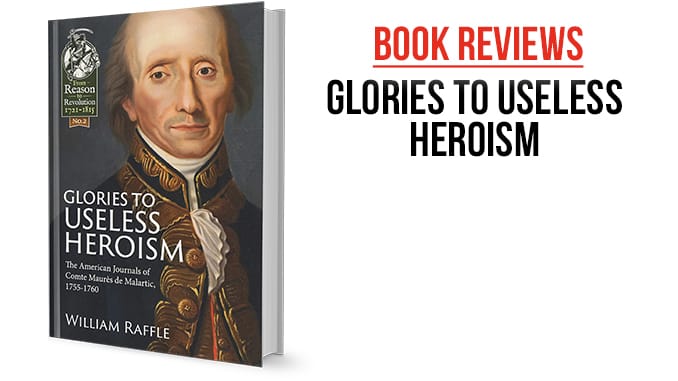 Glories to Useless Heroism is the translated journal of Comte Maurès de Malartic, an officer in the French army sent to New France in 1755 to help defend against the British. He stayed for six years, fighting in many battles, big and small, before being taken as a prisoner-of-war as the British closed in on final victory. His journal, number 2 in Helion & Company’s From Reason to Revolution series, provides a fascinating insight into the Seven Year’s War, or the French-Indian War as it is more commonly known on this side of the pond. William Raffle is thus to be applauded for translating this text and bringing it out into the open.

Raffle begins with a useful note on the organization of the French military in Canada and a biographical overview of his subject. He adds a section of maps, which is always welcome. Malartic’s journals are organized by year and he seldom missed a day to write a journal entry even if only a single line. His entries hit all the W’s; where he went and when, and who was there and what they did. He describes every aspect of a soldier’s life, the hazards they faced, the Canadians and ‘savages’ they fought alongside, and the battles and skirmishes in which they fought. The picture that emerges is that of many minor wars – the internecine conflicts amongst the Indians, the patrols and forays into enemy territory, the ‘war’ just to survive in a hostile climate – fought in the context of a great Imperial war that few of those fighting in the great expanses of the North American forests knew or cared much about.

Under Raffle’s expert guidance, Glories to Useless Heroism is a must-read for any military historian of this absorbing and crucial conflict that had major ramifications for North American and European history. Historians of the ‘middle-ground’ between Europeans and Indians will also find much to chew on in Malartic’s text. For wargamers of the French-Indian War this is an essential volume, detailing not only the wide range of engagements fought but also how they were fought, including excellent descriptions of the combatants and tactics. Finally, as a historian and military history enthusiast, I am a big fan of ‘gateway’ books; those works that introduce us to new periods through personal narratives or exciting accounts of significant events that lead to more in-depth reading and research. Glories to Useless Heroism fits that bill perfectly for the French-Indian War. Highly recommended.