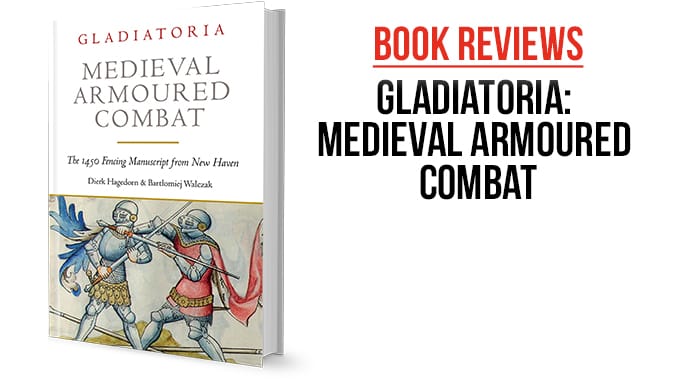 Some admonitions from history are so oft repeated in war-gaming circles that it seems surprising that they need to be repeated at all. By now surely it is known that the Wehrmacht was mostly horse drawn, we no longer need to be reminded that Greeks other than just Spartans fought at Thermopylae, and it must go without saying that a medieval knight in full plate emphatically could get up on his own if he fell over.

This hefty tome stands as compelling evidence for the mobility and ability of the armoured knight, using sources which are almost criminally neglected in modern scholarship, except in the more specialised researches of the European Martial Art scene. The text is a gestalt of several codices dating from the 1450s, with both original German and English translations, and original accompanying illustrations. This is not a written history, though it contains a lengthy foreword and copious notation and explanation of the sources. The main substance of the piece is a series of lavish period illustrations; full colour reproductions of original art. Each describes both attack and counter for a huge variety of fighting moves.

It is intriguing how little Knightly combat involved the use of what common sense suggests is the ‘business end’ of a sword. Rather, Gladiatoria demonstrates that ALL of a sword is a functional part of armoured combat, as is the elbow, or the gauntleted fist, or the hips.  The notion that it was considered a legitimate fighting move to unscrew your pommel and throw it ‘forcefully’ at your opponent is particularly delightful, and just a small part of how this work demonstrates the fully harnessed Knight as an almost unrivalled combat monster.

It might seem at first glance that a fencing treatise holds limited potential for the gaming fraternity, (except perhaps when the air becomes heated over a vexatious dice-roll) but this is not necessarily the case.

The lavish plates would be of much use to the miniature sculptor and the avid convertor looking for inspiration, not only for their depiction of intricate details, but also the dynamic posing. It might take a clever eye to interpret some images, given the artistic limitations of medieval art, but the poses are generally clear enough.  The miniature painter might also find inspiration here too, though be aware the foreword suggests that the heraldry depicted is intentionally quite generic, and thus probably doesn’t represent specific historical examples. There is even a useful pictorial breakdown of the component parts and naming conventions for a Knights harness.

Overall, this book is an aesthetically pleasing reconstruction of historical codices, which justifies much in-game superiority for the Knight over other contemporary soldiery.  Any suggestion that Knights were cumbersome bipedal turtles is very much put to bed.