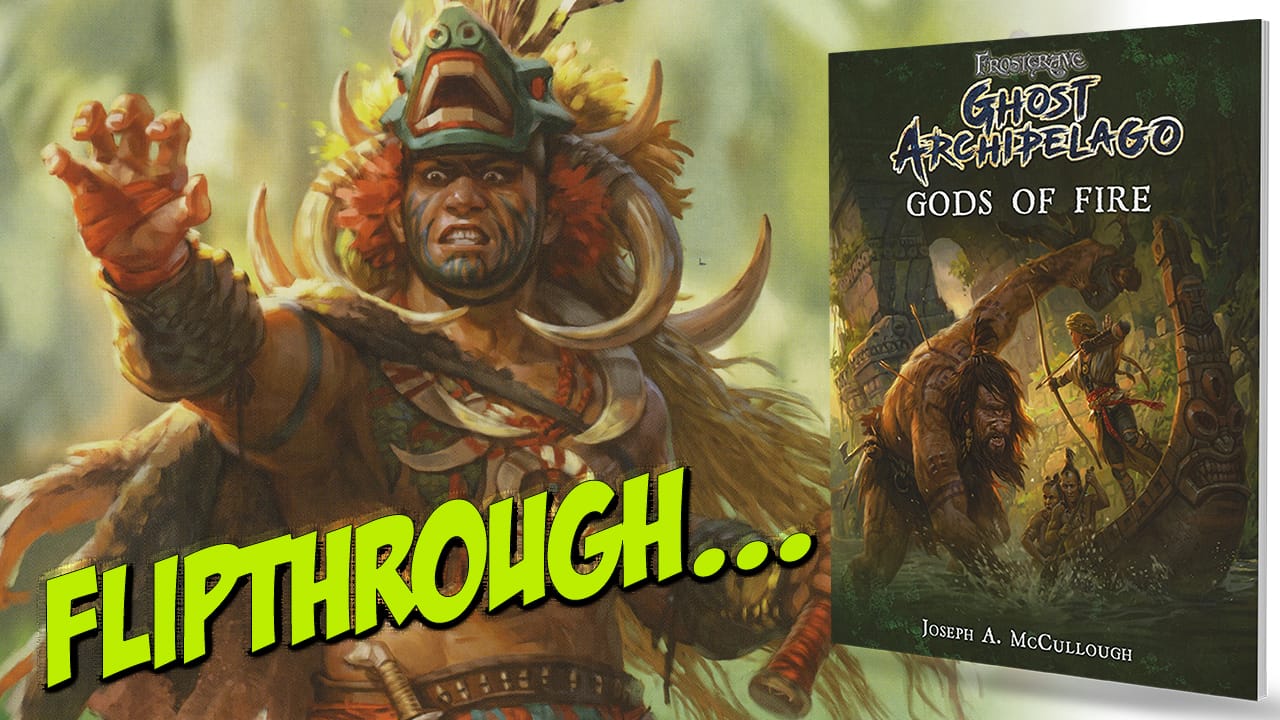 Ghost Archipelago: Gods of Fire is the second supplement for this fantasy skirmish wargame by the author of the acclaimed Frostgrave. It adds new character classes, rules for creating Tribal Warbands, new rules and a number of new scenarios to add to your Heritor’s legend.

The rulebook begins with a brief introduction, then plunges straight into the world of the Tribals, the disparate peoples who live on the islands within the Ghost Archipelago. The main focus of this section is providing rules to enable players to create one of these tribal groups as a Non-Player Character faction, something to be encountered and overcome during a game, but created from a list of different attributes and abilities to add unique flavour. The attributes can be either positive or negative, and are able to be generated randomly, with a full description of what each attribute offers.

The book then supplies a number of sample tribes that can be encountered. Each of these have some ‘flavoursome’ description and the relevant attributes for that tribe. These are ‘off the shelf’ tribes, easing the burden of creating your own and providing both ideas for creating miniatures and adventure hooks.

Of course, with these new potential enemies, every gamer will need new friends for their Heritor crews. New specialists are outlined, six in total, ranging from the ‘Bowman’ (think ships and boats rather than archery), the Eagle-eye (who IS an archer), Totem Warriors, Tribal Guides and all the rest. These are recruited back on the mainland or amongst the islands themselves, adding new skills, fighting abilities and additional options. There are also two new weapons, the Blowpipe and the Throwing Spear, adding some more tribal advantages that may be used by players.

New rules include an expansion upon those for Small Boats, adding Capsizing, Canoes and Swivelbows. The Swivelbow adds some hard-hitting firepower to a Heritor crew’s craft, the small boats that they use to explore the individual islands.

There are three sets of campaign rules in the book, named The Observation Chamber, The City of Cathaka and The Gods of Fire. These are short campaigns, offering a number of gaming scenarios which can be integrated into an ongoing series of games or run separately. The three campaigns have no direct links to each other, save the fact that they take place in the Ghost Archipelago itself. Everything has been provided to offer a suitable gaming experience that aims to test the abilities of existing and new Crews to the utmost.

The New Treasure section adds in many new magical and other items that are designed to bring new options to the game. Each item is described in full, including its in-game effects.

Finally, there is the Bestiary, with new animal encounters ranging from Giant Rats to Fire Eels, the horrific Kraken to the Saurian Armourback, plus sentient creatures such as the Cathaka, a tribe of half-man, half-bird creatures which feature in one of the campaigns, and the Cyclops people, plus the new Undead adversaries, the Petrified Men.

This new, second supplement for Ghost Archipelago follows a fairly standard layout but is much more ‘open’ than the last one. The rules can be easily transplanted into an ongoing campaign or the campaign set ups within may be used as separate adventures. As always, this is a book designed to add more options to players, so you can create your own adventures for you and your gaming group.

Released at the same time is a new novel to offer even more adventure ideas, the new Farwander novel from Ben Counter, putting down on paper the type of adventure that players can create for themselves.