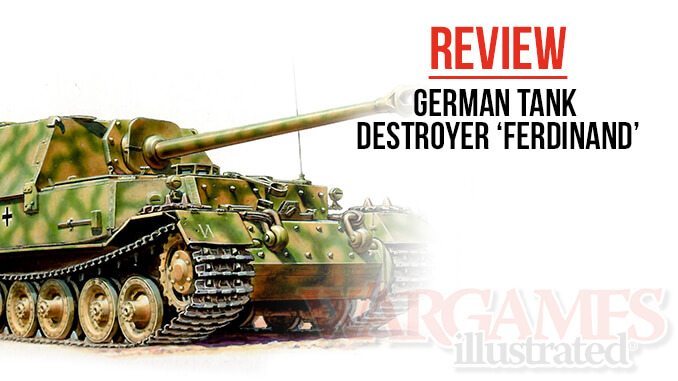 I should think that all of the most widely used WW2 AFVs are already available certainly in 1/100th scale, but its always good to see some of the less mass produced vehicles in kit form, particularly at a very reasonable price!

The ‘Ferdinand’ first saw service in limited numbers on the Eastern Front in 1943, and this model by Zvezda makes up into a good representation of it.

Like all the 1/100th scale models from Zvezda that I’ve bought, this is a simple to assemble ‘snap-fit’ kit; no glue required model. And with only 11 parts this model can be built literally, in a few minutes.

A word or two of caution though, which to be fair, applies to all ‘snap-fit’ kits. As the models are designed not to need any glue, the fit of the parts has to be tight, which can make it awkward to remove a part once its been positioned. Since I always glue the components together regardless, I either open up the fixing holes slightly or file down the pins to make it easier to carry out a dry-run so that parts can be trimmed or sanded if necessary if the fit isn’t quite right.

CONS: For just £2.99 I can’t really come up with any ‘CONS’. The track detail is a bit basic, but cover them with ‘mud’ and nobody will notice or care.

But what of the end result? Does it look like a cheap ‘snap-fit’ kit? Will it fit in with the rest of my German forces?

I think that the photograph of the unpainted kit answers those questions and I’ve already ordered a couple more.

And given that my WW2 interest leans towards Italy and the Mediterranean theatre of war, its worth noting that following the battle of Kursk, the surviving Ferdinands were modified, renamed Elefant, and sent to the Italian Front. The most visible ‘mod’ was the addition of a ball mounted MG34 on the hull front, which would be relatively simple to scratch-build, and so my Ferdinands will be modified to create Elefants, and expand my Axis forces.

So, a nice looking model, easy to build, and very reasonably priced too.