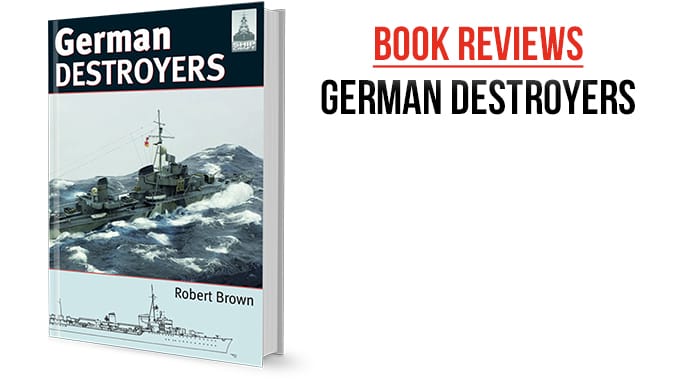 It must be annoying when the pretty girls get all the attention. I am talking about battleships and aircraft carriers, of course, but it is the destroyers that seem to do all the work so that the sisters can go to the ball. Those nippy but pugnacious little ships form the backbone of every modern navy. That included the German kriegsmarine in World War II. Robert Brown tells us all about them in German Destroyers part of Pen & Sword’s Ship Craft series.

German Destroyers is a 64 page, glossy book full of photos and colour plates of these ships in all their variety. Brown incorporates an excellent technical description of the original destroyers along with their myriad modifications. He also relates what happened to them all, and for the most part that was not pretty. In addition, an extensive model-making section tells us where to get kits of the destroyers in different scales and how to build and paint them. The ships themselves were rather elegant, with narrow beams and slender hulls. They were quite well stacked on top with a range of main guns, anti-aircraft machine-guns, depth-charges, and torpedoes. They also had the capability to drop mines into busy allied shipping lanes. They were sleek, quick, and had good range. On paper anyway. In practice, they behaved like Ronald Searle’s St. Trinians brats, beset by problems with their boilers, weapons, and personnel.

Brown’s survey of German destroyers is quite thorough for the size of this book, and he adds a little bibliography if readers want to dig further. The models steal the show, but the colour plates, photographs, and diagrams all add to the quality of this work. German Destroyers is therefore a very useful book for modellers, naval wargamers, and anyone interested in how the kriegsmarine operated in practice.