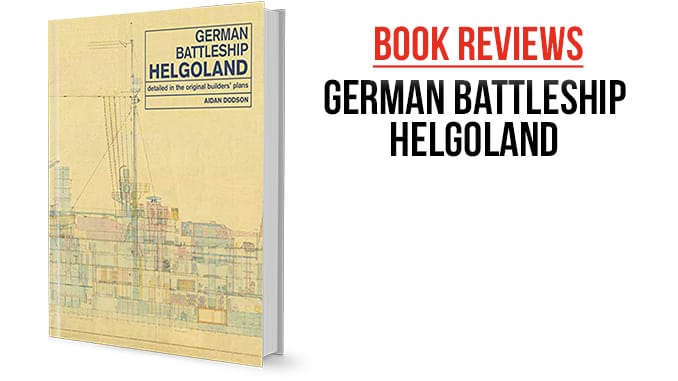 In German Battleship Helgoland, Adrian Dodson takes an unusual look at this German World War I battleship through the lens of technical warship plans maintained by the National Maritime Museum at Greenwich. The result is a quite mesmerising coffee-table book in a growing Seaforth Publishing series of similar volumes for other warships.

Dodson begins with an introductory chapter, charting the rise of the German Dreadnoughts as they vied for mastery of the seas with the Royal Navy. Of those, the Helgoland class featured prominently in the war, with SMS Helgoland, laid down in 1908, taking part in the action at Jutland in 1916. The author then provides an overview of the main elements of the ship, including structure, armament, propulsion, and armour. But it is Dodson’s in-depth notations on enhanced ‘slices’ of the ship’s colourful technical drawings that make this book something different. He analyses each part of the ship, revealing every aspect from the main batteries to magazines to storage and bunkers, and if you were a German Petty Officer needing to ‘go’, Dodson shows you the location of the NCO’s heads and urinals! The drawings contain everything that made the ship function, from armour thickness to hydraulics to electrics.

Model-makers will revel in German Battleship Helgoland’s detailed illustrations, along with warship enthusiasts who might wonder how these behemoths were designed. At first glance, then, this book is published for a specialist niche audience, but the level of detail draws even the layman in, and sometimes books can be simply beautiful and that is enough.