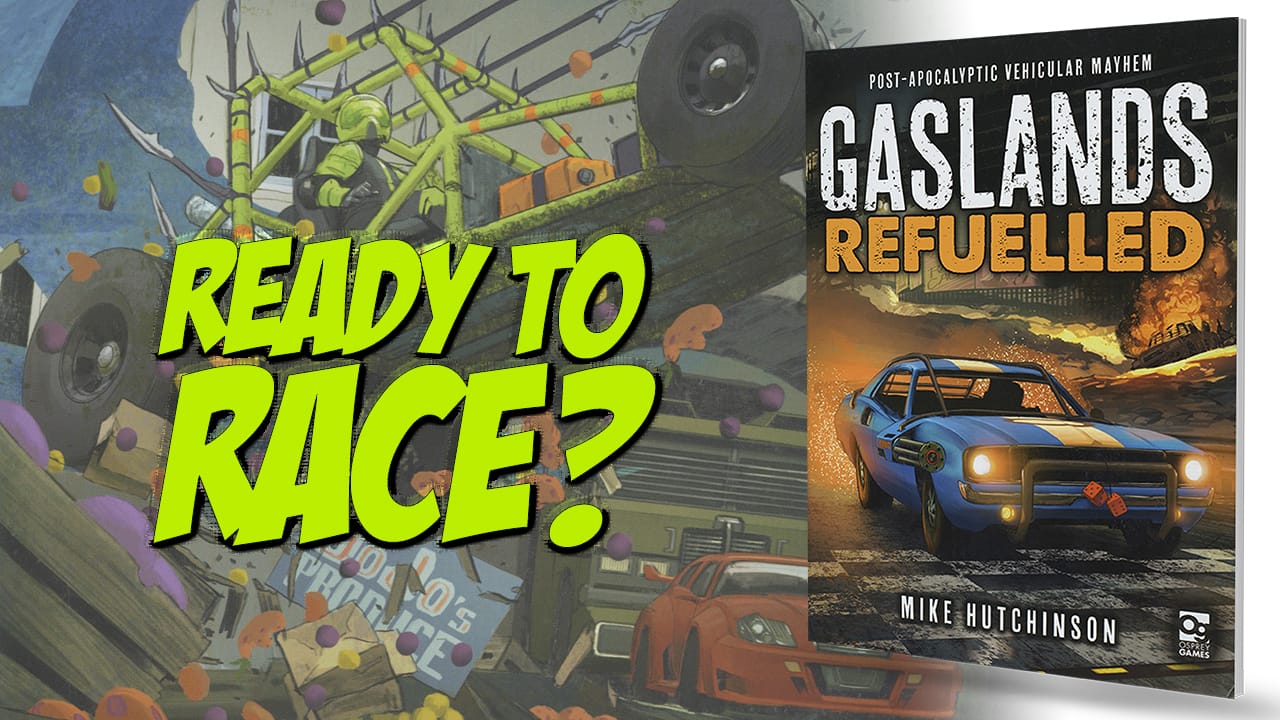 Osprey Games have teamed up once more with game designer Mike Hutchinson and parts of the Gaslands community to present a new and shiny hardback version of the basic rules, plus a whole host of new content.  The new book is a slightly larger than A5 hardcover format book with 192-pages that are lavishly illustrated and add new gaming options.

First of all, watch our Flipthrough of the original ‘blue book’ version of the rules, and perhaps read through the Designer’s Notes article we ran in our print magazine (WI 362, December 2017)

The new, improved rulebook means more space for a more in-depth version of everything. There are more Vehicle Upgrades, expanded terrain rules, including the new Ramps, more details on using the Audience Votes system, and a wealth of additional detail on the Sponsors, including really ‘hot’ ones like the Order of the Inferno.

Perks by ‘class’ and their cost in Cans (fuel is all, and makes up the ‘points system’ for upgrades) are all here, again offered in slightly more detail. The ‘fan favourite’ War Rig is also here, as are better depicted rules for Articulated vehicles, and the simple but useful examples that really aid in grasping the gameplay have been ‘pimped’. This ‘pimping’ is most evident with the scenarios, which have a host of maps and examples, set up and victory conditions, and other material to make them work on the tabletop. Our favourite is ‘Death Race’ (well, we’ve seen the movies…).

The Televised Events section takes players through a number of new scenarios, masses to enjoy. There are 11 in total, all of which offer teams of drivers the opportunity to have their exploits transmitted for the. Each scenario has clearly laid out objectives and victory conditions. A nice twist is the inclusion of some Special Events to complicate matters, plus some of the original ‘classics’ have been enhanced with more rules – Tank Commander anyone?

A new feature is the inclusion of a Campaign System, both based upon results and a Narrative Campaign, with examples of how to run both types and what happens to your teams after each encounter. Again, this is well developed and explained, with plenty of explanation and example.

This is a good, clear, easy to understand version of the original rulebook which has some great original content.  In a sense, having ‘escaped’ the bounds of the 64- page book, Mike Hutchinson has been able to not only add new content which has evolved from gamers using the rules, but is also able to offer more on the content which already existed.  The level of interaction with the reader and the overall ‘look’ of the book makes this an excellent purchase for both beginner and veteran Road Warriors alike.

For more information, go to https://ospreypublishing.com/store/osprey-games/other-wargames/gaslands-refuelled

OR see the excellent and very active Gaslands UK or Gaslands Facebook pages, or the website https://gaslands.com