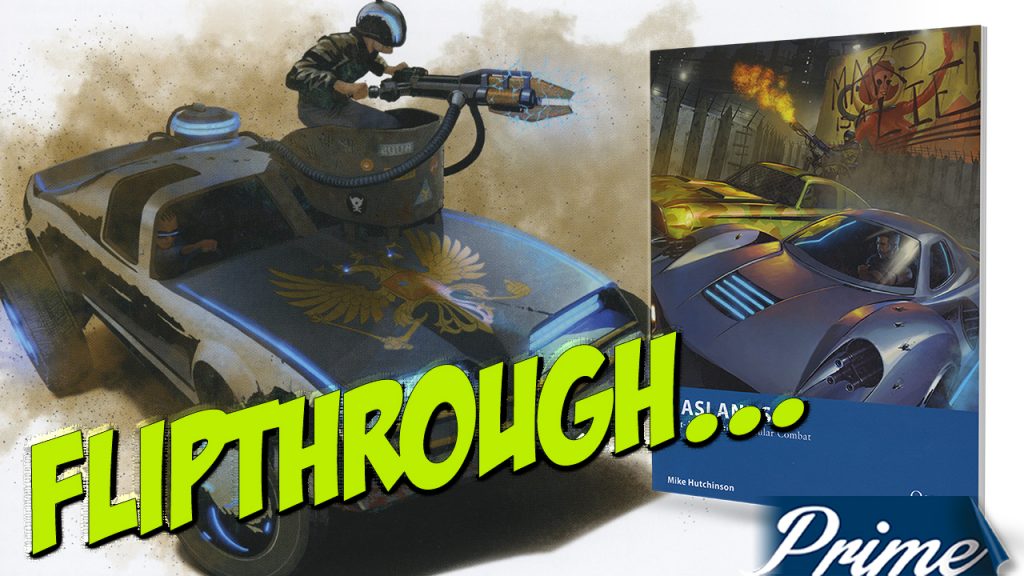 As you already know Osprey Games offer a whole variety of different types of miniature games across a range of genres. The latest in the now famous ‘blue book’ series is Gaslands: Post-Apocalyptic Vehicular Combat.

This softback book begins with a brief background and details of what is required to play. Two essential aspects of which are the use of specialized playing aids, the Dashboard and Maneuver templates, examples of which are included in the book. In addition, players will need what the book calls ‘Toy Cars’, most often diecast versions and preferably in 1/64 (roughly 20mm) scale, although the rules can cater for others by increasing or decreasing ranges, the size of the Maneuver Templates, movement distances, etc.

Here, a standard turn is outlined, a series of phases, with step-by- step overviews and suitable examples.

A core part of the game is the use of the Maneuver Templates, which are chosen according to the Gear or speed of the vehicle. Once a template has been chosen, it is placed on the table in front of the moving vehicle and a Skid Check is made to see if the vehicle is able to make the maneuver. This check is complicated by the vehicle’s speed, any hazards and other factors, with a variety of potential results. Again, plenty of examples are cited, both written and pictorial. The consequences of a poor dice roll can include a collision, although this may also be a deliberate choice as part of an attack!

After all that maneuvering, the Attack Step is where the combat element of the game comes into play. There are full rules regarding how vehicles may fire upon one another, all in standard terms such as; line of sight, range, arcs of fire and, of course, the consequences of weapon usage, including damage to the target. All with clearly defined examples

Given the fact that players may use any scale or type of vehicle model, a key factor in the rules is the ability to design and build a vehicle of your choice within the confines of the game. Once you’ve decided on the type of vehicle you want, from a motorbike, through pickups and buses, all the way to helicopters and tanks, you add weapons, armour and other equipment to create a unique model. This can be an addictive part of the game, providing a great opportunity to show off your model making skills!

There are suggested rules for creating teams, examples of ‘stock’ teams that can be used and 6 scenarios that can be chosen or rolled for randomly.

All the scenarios have clear details of table setup, special rules, maps and victory conditions. There are also a number of advanced rules, such as various ‘Perks’ that may be used to add levels of additional motivations, skills and equipment. These include a basic campaign system known as ‘Seasons’, including experience points via ‘Audience Votes’.

These rules are easy to access and can be used with readily available resources. There are some nice touches in terms of gameplay and the opportunity, or excuse you’ve been waiting for, to convert a diecast toy car into a unique model is always interesting.