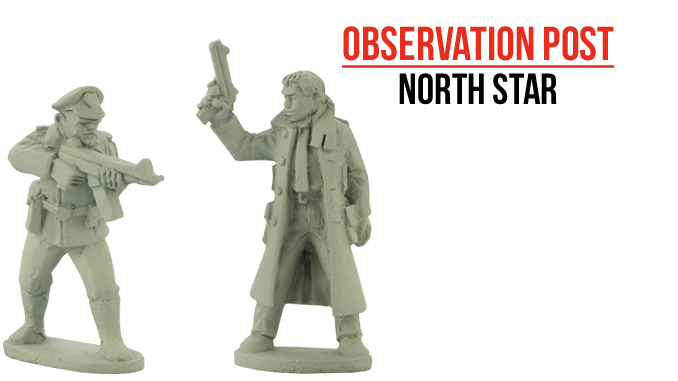 North Star have added to their range of 20mm miniatures for the increasingly popular Osprey Games’ Gaslands, with two sets of figures designed to represent Team Highway Patrol.

Within the game players choose ’sponsors’ for their team and one of those on offer is Highway Patrol: “the last law in a world gone crazy’. The men of the Highway Patrol are (unsurprisingly) based on US cops and the figures represent peak-cap and sharp uniform wearing officers, armed with a variety of hand weapons.

Pack NSPI0C11 (see below) contains three gun toting passengers (one needs to be armed with a ‘implement of carnage’ LINK) and two drivers. These figures are seated and designed to be fitted into/onto the Hot Wheel style cars the game employs.

Pack NSPI0C12 (below) contains five officers on foot and includes one detective type who clearly takes fashion tips from Blade Runner’s Deckard. The other ‘cops’ have a look of Mad Max One about them.

Great sculpts which showcase designer Mark Copplestone’s talents to the max and a valuable addition to the expanding Gaslands figure range which, next up, is set to include Mad Max Two influenced punks.