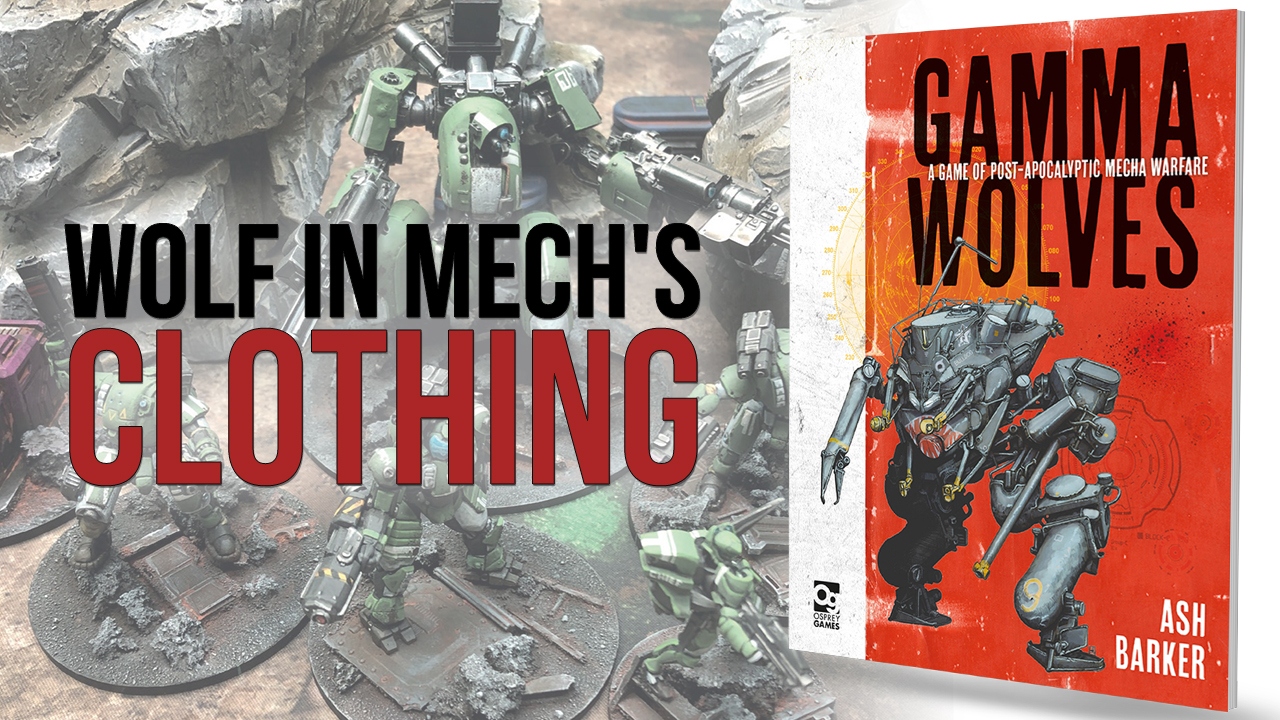 A striking and graphically punchy cover adorns the front of Gamma Wolves, the new game by Ash Barker, whose previous offering was Last Days: Zombie Apocalypse. It is published by Osprey Games, and it’s a 116-page, full-colour, hardback book. It offers you a mecha type sandbox of gaming options to battle out, either in the book’s post-apocalyptic Earth of 2291, or whatever stompy mech suit environ you might care for.

It begins proper on page six with a two-page, light Introduction, then moves to What You Need To Play. This is where the models – ‘Frames’ (a catchall term used to describe the base of all vehicles) – get a proper introduction and all the other bits and bobs you need are mentioned – cards, markers, tokens, and D6s.

There’s then a sub-section of this chapter, Game Definitions, that touches on further details. Frames are split into three options – Light, Medium, and Heavy – which will determine all manner of possibilities when you kit out your force. There are various other things here too – game extras get teased out, but it almost feels like the author had too much stuff cool stuff he wanted to say straight away and he couldn’t quite hold it back until later, because without the context of the information of later chapters it’s a little random.

The book is scattered with cool photos of various stompy mecha, which is always much appreciated! You can, and are generally encouraged to, mix miniatures from various ranges and this is reflected in the photos.

Now we’re at page 23 – Assembling Your Crew – which is an important part of Gamma Wolves. Comparisons to roleplay gaming feel apt here; there are a host of classic mecha RPGs out there that have almost certainly provided some inspiration, and you only need to look at the game’s ‘cards’, which are more like D&D character sheets, to see there’s tons of detail to your Pilots and Frames.

The first thing to do is pick an Arcology, which will very much impact your progress ahead – Pilot availability and Frame preferences determined by this as well as Quirks that can impact the game.

This is where Gamma Wolves got this reviewer’s full focus – the different Arcologies are built around various tropes of the post-apocalyptic genre – which fits this 2291 nightmare world of radiation – and will provide a huge amount of modelling and thematic options.

There are six in total and the decision is a tricky one. The Burg, for example, are genetically engineered to survive much of the nastiness the radioactive world contains, but they only have a lifespan of 20 years, so veterans are hard to come by! North-Star consists of the last remnants of the American/Canadian government but it’s hardly the land of the free. Their Veteran or Trained pilots can evade more effectively if an unfortunate Rookie is close by to take damage instead. The Bolschev are the people of eastern Europe and Asia and are all about honour and commitment – their Pilots can Stress their reactors to be more effective but will damage their Frame.

But who drives the mechs? Well, you can choose between Rookie Pilots, Trained Pilots, and Veteran Pilots, all costing different amounts. One of these can be upgraded to an Ace at a further cost. As for the Frames they will pilot – their details start on page 32, fronted by one of the book’s various and really inspiring bits of art – full-page colour pieces that make us want to go out and build cool mecha RIGHT NOW!

If you’re in a one-off game, each pilot will need a Frame. For a campaign your Crawler – the Crew’s mobile homebase – can house six Frames in total. Each of the Frame sizes has its own sheet and the bigger you go, generally, the more power, hardpoints and defence it will have, but at a cost to manouverability, speed and evasion. Various propulsion types can be chosen too, again adding variations. Here’s where material cost arrives too. There’s no restriction on Frame size – they all have the same ‘value’ but the bigger they are the more material cost each addition carries.

Loadout Frames is between page 37 and 45, starting with charts of offensive loadouts and their traits, with varying costs for the different Frame sizes, and details of where they are placed on Hardpoints. Technical loadouts – things that can go on a mech but don’t take up Hardpoints, are next and will further boost your Frames

You could spend hours tinkering with your mecha and loadouts … This is pretty much the point! It is a lot of detail, but totally right for a game where huge stompy robots are as important as the humans within them.

Finally, we are into Playing Gamma Wolves on page 47. The game happens over phases – Initiative, Manoeuvre, Gunnery, Cool-Down, and Check War-Clock. Frustratingly this book arrived with us right as the UK’s second lockdown hit, so we’ve not been able to put it to the test, but we can talk about what’s here and theorycraft some ideas about how it might play out.

Frames move up to their allowance and can turn more times the further that allowance is. Each turn is up to a 45 degree rotation. They can claim salvage they are close to as well, which can add to your Frame’s weight and change its encumbrance amount – there’s a lot to this game’s little details and thanks to such a small per-side model count that’s pretty great – lots to consider in-game.

Snap Fire can happen if the opponent has a Lock on the moving mecha. This is a tactical extra that will make for more calculated positioning and movement – a really important part of good mech combat we reckon and very welcome here.

Past page 53’s fantastically odd mecha art, its into the Gunnery Phase. There are lots of guns in this game – huge, house-sized things at times, and they all cause Stress on the active pilot as they fire. Targets are selected, details such as Line of Sight, Lock, and Range are checked, then the target has the chance to Evade. If it does the Gunnery Test becomes Opposed.

Now it’s time to build the Dice Pool – 3D6 along with any Bonus Dice the Loadout provides. Linked Weapons are possible in game and these will add each gun’s Bonus Dice to the total pool.

Next, the focus shifts to the pilot and how skilled they are at Gunnery, if they’ve moved their frame to have a good Attack Vector, if the attack is obstructed at all – it sounds like a lot on paper but is quickly picked up (at least in our sad, lonely me vs me tests).

Evade rolls, if they are attempted and successful, will reduce the number of attack successes and determine the final net successes. Where damage will happen is rolled on the Hit Location Table on page 57 and, really nicely, successes can be sacrificed to shift that aim up or down the chart. There are neat little rules like this throughout the book that show the author’s given a lot of thought to not just the core systems, but how to add flavour that mecha fans will crave.

Damage can build and, as areas take more than they have the capacity to manage, the functionality of those locations will decrease before their destruction. Pilots can also take injuries, which will reduce their own effectiveness.

The Cool-Down Phase comes next and, as is tradition in anything mecha, reactors need to be managed, with successes allowing the reduction of Stress from the Frame. Pilots also take a deep breath and remove their own Stress tokens here, then the turn moves to its final part, Check War-Clock.

Frames can’t fight forever – they have limited clean air and fuel – so the game’s actions will tick down the overall time a Crew can remain in combat. Most notable is that each time you reduce Reactor Stress you’ll reduce the War Clock. This adds a level of tension and cost to proceedings and may result in pilots pushing the limits of their frames, to make one last heroic action. Which is obviously the exact game mechanic meets story drama you want to end out tense battle.

Area of Operations and Missions arrives on page 63 and talks terrain, then on page 67 it’s time for Gamma Wolves Campaigns. There’s extra detail here with a Crawler and Crew Chief assigned and named, and a bit more versatility in loadouts present, as well as missions randomly selected. These missions run from page 70 to 78 and are generally what you might expect, with some extra flavour and gaming fun in the shape of stuff like Ghost and the Darkness, where a still running Old-Tech AI sees all combatants in the area as enemies.

Pilot injuries get a table on page 79, experience and levels are discussed on page 80, and advances span pages 81 to 84. Lots of great detail to add value, growth, and personality to your in-game actions.

Salvage takes us to page 95 – a load of different goodies that can be turned up as your Crawler moves through the Sea of Destruction you call home. The Old-Tech table has gadgetry such as auto-repair systems, magnetic grapples, remote drones, and, most importantly to us, fuzzy dice!

The pages to 100 cover the ways you can re-fit Frames, pay a visit to Free-Stations to hit the market and get new kit, and how to actually end your campaign.

The book ends with Optional Rules – pilot ejection seems like our crew might prefer it was an essential and multiplayer games should be fun when our own ongoing mini-apocalypse finally ends and we can start gaming together again. And the final pages are Frame and Pilot Cards that you can copy and print.

If you like mecha, you probably went to order this book the moment we said the word at the front end of this flipthrough! If you’ve not dipped your toe into the world of big stompy warframes, Gamma Wolves looks to be a damned good start.