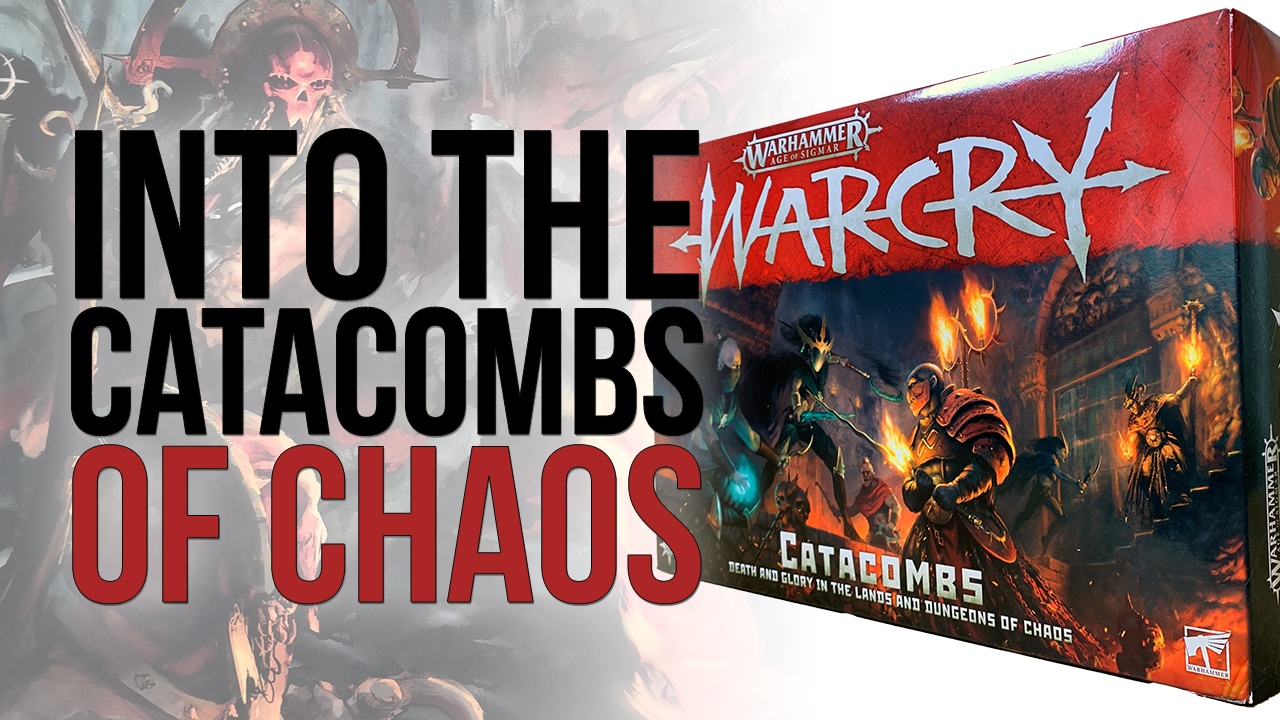 It’s always a treat to delve into the fantasy worlds of Games Workshop and, with the release of their new Warcry boxed game on the horizon, we decided to delve deep into the Catacombs.

In part one of this two part series we look at the new warbands and their abilities. There are pictures of the new warband and terrain sprues from the box in the article beneath the video player too, for you to examine in detail.

We’re delving deep beneath the Eightpoints, taking warbands into dangerous dungeons, claustrophobic crypts and catacombs, and many other areas of terrible terrain that the Dark Gods and their minions have cooked up.

Yes, we’re unboxing Warcry Catacombs, the new and most certainly grim dark, boxed game for Games Workshop’s Warhammer Age of Sigmar spinoff. The original Warcry focused on warbands in brutal combat over the Eightpoints, Catacombs focuses on warbands in brutal combat under the Eightpoints. Same same, but different? Let’s find out in this, the first of a two-part series.

Here we open the box, breathe in that sweet new game smell, then take a close look at the two new warbands and their abilities.

Opening up the box

It is instantly apparent that this is a set packed with goodies. There’s frame upon frame of miniatures and terrain as you dig down. Be warned, within is far more than Eightpoints – the scenery in here is bristling with spikey bits and, as all GW fans should know, hobbyists who care should do their very best to avoid spikey bits!

Some Games Workshop boxed games, such as 40k Indomitus, are simplified with push-fit models. Warcry Catacombs is a more complex product, very much aimed at the keen hobbyist. Extra complexity is instantly apparent when looking at the frame for the Scions of the Flame, who are one of two new warbands included in the box.

The number of parts is sizable – more than 50 to make eight models – and the complexity of them is certainly impressive.

One thing you can’t fault Games Workshop on is the quality of their plastic miniatures. They feel years ahead in terms of detail, fit and tooling – their plastics are at a level of detail beyond the stuff other manufacturers are making in metal or resin multipart kits.

These are exquisite gaming miniatures rather than many optioned rank and file types – the parts fit together cleverly, making for dynamic and characterful groups of models with bits that project in all directions and have maximum detail at all angles – something many other plastics don’t achieve. The details are so crisp, clean and distinct too, it’s exciting stuff and will make painting a joy.

We’re also pleased to see a mixture of male and female fighters across both warbands, and in more balanced, non-male gaze type armour designs and poses than many other companies are still, somehow, producing. There’s also some racial diversity visible in details on the sculpts themselves – GW are going beyond just painting a model with darker skin here. Baby steps, but positive ones that we feel should be encouraged.

Lets get things started with …

… A closer look at The Scions of the Flame

The Initiates are rather standard, with just a hint of flame in places. The Scions of the Flame might be fire worshiping zealots but rather than produce sculpts covered in a blaze there’s a commendable sense of restraint in their design, making for more visually appealing models overall.

There are also the Fireborn, who are more standard(ish) battlers, though they’re a tad more imposing. These warriors have a few alternate armaments available and like the rest of the warband may use Fiery Might – a universal ability that bumps up the Strength characteristic of actions.

The different options for the Scions of the Flame.

The rest of the warband consists of individualistic characters; this is where things get more interesting in the sculpts and abilities. These are the sort of brutes you most certainly would not want to meet on a sunlit day, let alone down a dark sub-terranean alleyway that drips with lava, is peppered with spikes, and rings out with the screams of the Chaos gods!

Leading them is the huge Blazing Lord, who can make Beheading Strikes with his fiery flamberge sword (which adds extra damage) or with the use of the Ignited Fervour ability, which is activated on a triple and boosts the attacks of all nearby allies.

The Brazen Champion is a fantastic brute model, with a flowing skirt of chains and spikes, who can also use the Beheading Strikes ability.

The massive Brazen Champion, ready to slice his foes asunder.

The Imolator is the most on-fire model in the warband and has the crowd control ability Inferno, which is activated with a triple. This can send damaging flame around all nearby enemies. On a 6 the damage points allocated will be equal to the value of the Inferno ability, which could be brutal if there’s a crowd nearby!

Plenty of immolating abilities are available!

The Inferno Priest brings the Quad ability Engulf in Flames to the party, which is potentially devastating! All it will take is a good roll of the dice and decimation will spread, allocating damage all over the place. Props to this great looking model for the brazier meets branding iron staff too, stylish and practical!

The Inferno Priest with snazzy staff.

Gosh, so much to say and we’re only just through the first warband. Onward to the second, the Khainite Shadowstalkers. An even more complex frame of spindly bits, thin weapons, swinging chains, flowing hair and cloaks here – over 80 parts in all to make nine models. The crossbows are even strung. As we said before, these are next level plastics.

The Shadowstalkers are marked for death, so they fearlessly fight, a little like the doom seeking Slayers of the Duardin, but with the added … um … bonus? that their souls are eternally bound to the Shadow Queen. They flit through the Umbral Web and are as deadly and specialist at sneak kills as any assassin we can think of. They look the part too. They look bloody great!

With points costs that match their elite abilities, the cheapest warband warriors are the Shroudblades, who have a choice of cursed swords or umbral spear. Four of these incredibly dynamic models are included, costing 90 points each, with the option to mix and match their weapon types. Their cloaks, and those on all models in the warband, give the shimmering effect of leaping through the Web and its extremely effective.

Any of the Shadowstalkers can use the basic ability Shadow Leap with a Double, to make move actions as if they are flying. This is a quick but flimsy warband who thankfully, for the controlling player at least, have various evasive options.

The Shadowstalkers have some great evasive and hit and run type options.

The Darkflame Warlocks can Harness Shadow and reduce the number of enemy attacks against them. These are stunning miniatures too, wielding either a magic spitting Doomfire Ring, or dual repeater crossbows, which is an always badass look. In the ongoing “who did it first?” playground fight between Blizzard and Games Workshop fans, the dual wielding Warlocks look loads like the archetypal Demon Hunters from Diablo. But those Demon Hunters, in turn, took heavy influence from earlier GW Dark Elves … so … yeah, we shouldn’t have gotten into this. Moving on!

The Slaughtershade wears a sinister mask with a serpentine tongue lolling from it. The blades on the hip, the flowing hair, the fine weapons and swinging whip. As we’ve said, these are absurdly lovely plastic miniatures and, despite the spindly bits, they are fairly strong and resilient. The Slaughtershade is a momentum-based fighter and the Instrument of Khaine ability allows them a bonus move or attack action if they take down an enemy. Hit and run options here then.

Weighing in at a hefty 190 points is the Shroud Queen. This model will, we suspect, be a favourite with high level painters. Their robe wraps around and creates a flickering snake-like style, the faceless mask gives a look of ambiguity and unseen, emotionless danger. Their Quad ability, Ensnaring Darkness, spreads damage equal to the ability roll and hits all enemies within 3”. If they opt to take three wounds themselves the range of this damage increases to 6”. Ouch!

The outstanding Shroud Queen model and her stats.

In part two of our Warcry: Catacombs deep dive we’ll get into the following:

So make sure to check it out.