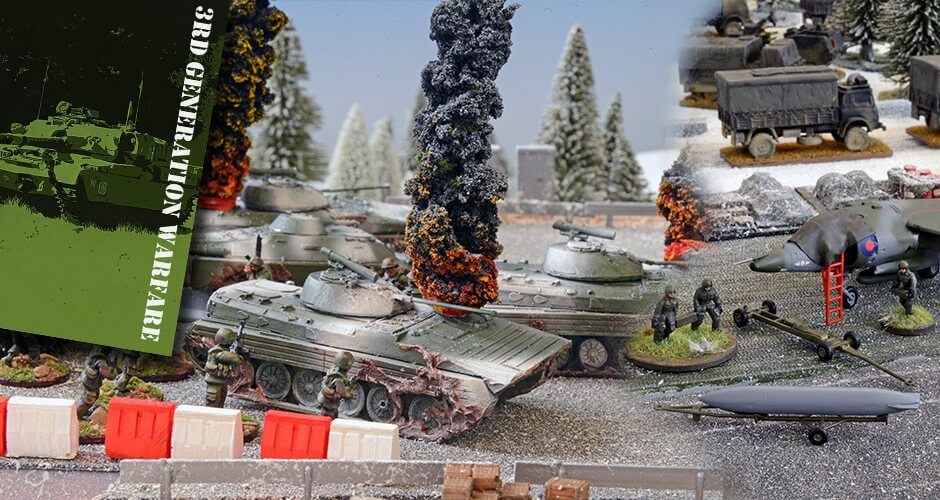 An overview of the rules based upon the scenario played during the photoshoot, ably crafted by Roger Gerrish.

Nick Ayres was recently invited to Wargames Illustrated HQ to demonstrate his new set of Post-WWII Wargames rules 3rd Generation Warfare. As luck would have it I was visiting Nottingham that week so I was pleased to be invited to play a few turns of this game with WI sub-editor Wayne. There appears to have been a resurgence in Cold War era gaming, and I’ve noted that many of the shows I have visited this year have featured display or demo games covering this genre. I was therefore looking forward to see how these rules played out. Nick and other members of the Leicester Phat Cats group provided some lovely 20mm miniature figures and vehicles along with a fine set of terrain boards to play on. I immediately recognised the wintery autobahn setup from the Phat Cats Cold War demo at the recent Salute show in London. The game was certainly going to look good, but how would it play?

As we would only have a few hours, the scope of this demo game was limited but Nick ensured that we would be able to use infantry, armour and artillery. Air power would need to wait for a future game. The scenario itself was standard Cold War Era fare with a Soviet mechanised probe against the forward elements of a British BAOR battlegroup. I took on the role of the commander of the red hordes whilst Wayne handled the ‘thin blue line’.

Whilst 3rd Generation Warfare follows the fairly usual format of an ‘I Go , You Go’ type wargame a player does not necessarily have the luxury of moving and firing all of his units, but is limited to a finite pool of command points. These points are used to activate a unit and allow it to perform actions, primarily to move or fire. The amount of command points available at the start of a turn is determined by rolling a number of command dice. How many dice you have is determined by the number of HQ and subordinate units you have in your battlegroup. The combined score on the dice determines the number of actions available to a player. One particular mechanic I liked was the option to set aside some of your dice secretly to become ‘counter intelligence dice’. Whatever value you roll with those dice are subtracted from the opponent’s command point total. This encourages the player to make some fundamental decisions; does he want to maximise his own forces potential or limit his opponents?

As HQs provide the lion’s share of the command points you need to protect them as they will be a prime target for your opponent. All the units in the world are no good to you if you don’t have the command points to activate them. Hmm, perhaps allowing Major Andropov to lead my assault across the bridge was a little rash!

Units are activated one at a time and each unit can perform multiple actions allowing various combinations of movement and firing. So whilst it is possible to perform a general advance by spreading your command points across a large number of units taking 1 or 2 actions each, you can also elect to allocate your points to a smaller number of units giving them the flexibility of multiple actions. This allows the opportunity to punch through enemy defences with focussed spearheads.
The decisions on how to allocate your command points are some of the most challenging and enjoyable aspects of 3rd Generation Warfare. The rules also allows the player the opportunity to give ‘overwatch’ command points to his units which can be used to activate a unit during the opponents turn. These reaction points can be used for ‘opportunity fire’ or moving into cover. Overwatch is triggered by any action performed by the opposing force. The downside is that ‘overwatch’ actions cost double command points. During our demo game, on a couple of occasions my ‘overwatching’ MBTs were able to fire on Milan Antitank missile teams which had fired at them, destroying or supressing the launching team before the projectiles hit the tank at the end of the turn.

This naturally brings us to combat and whilst 3GW provides copious lists of vehicles and weapons, the actual mechanics for combat are fairly straightforward. Combat requires the firer to first spot the target using Electronic sensors or Mk1 Eyeballs. If they are spotted they can be engaged. If a hit is then secured, the damage is resolved by referring to a number of tables and as would be expected in the world of automatic weapons, shaped charge missiles and tungsten tipped penetrators, the results are usually deadly. Even if your unit survives a hit there is a strong possibility that detrimental morale effects will be experienced. It is therefore crucial to ensure that vehicles and troops are not caught in the open and should be allocated enough command points to either move to cover or engage and eliminate potential shooters. To be successful in 3GW, you really must keep your units moving and shooting. I sadly learned this lesson when my BMPs allowed themselves to be caught in a traffic jam of their own making and were shot to pieces. With hindsight I should have done much, much better.

As mentioned earlier we were only able to sample a relatively small part of the game in the time we had allotted, but overall our impressions were favourable and I for one would be happy to play 3GW again. As someone who has played many modern warfare rulesets through the years beginning with Wargames Research Groups Amour and Infantry rules in the mid-70s these rules pressed all the right buttons for me. Modern gamers love their technology, the laser-rangefinders, the exotic armour, helicopters and missiles and 3GW has them all with literally hundreds of vehicle, troop types, aircraft and artillery listed. As noted, the game portrays the incredibly lethal nature of modern weapons and sophisticated sensors very well. I personally feel the game encourages players to adopt tactics to cope with the above or see their armies die rapidly and messily. I was also impressed with the uncomplicated and straightforward game mechanics and it was notable that we were able to play the game with just a few quick reference sheets to hand. After a first play of these rules I would encourage players who wish to take a crack at late 20th century wargaming to give this ruleset some serious consideration.