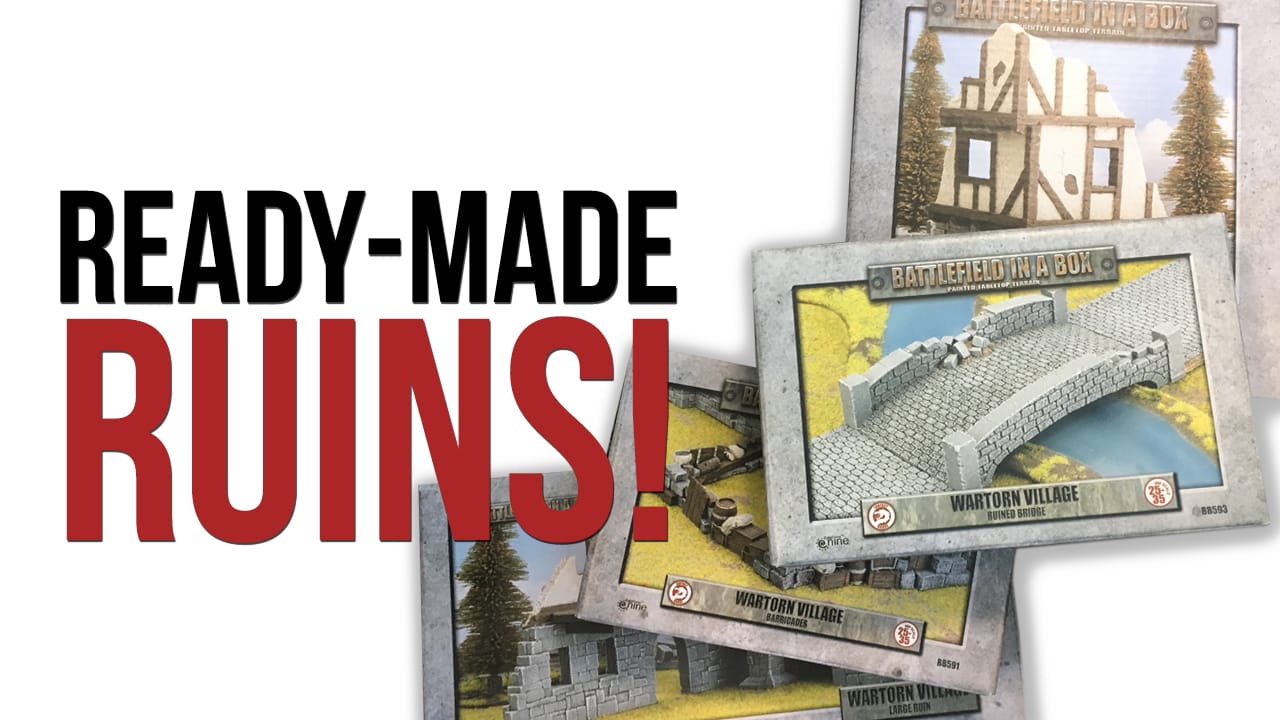 Gale Force 9 have a whole range of different buildings in either 15 or 28mm. The Battlefield in A Box system aims to provide pre-painted buildings and scenery that can be placed straight upon the tabletop. One of their latest sets is entitled Wartorn Village.

Labelled as suitable for 25 to 35mm ‘scale’, this is a fantasy-orientated range which could also serve in some historical games. The Wartorn Village consists of a number of different types of scenery.

The Large, Medium and Small ruin are all in a similar style, a stone-built ground floor wall surmounted by a ‘mock Tudor’ wooden and plaster upper floor. The three sets can be used together to form a larger ruined building or used individually. The large ruin comes with a separate upper floor section which can be placed upon a column and stone staircase. Painted in neutral colours, they would fit into many a background. They could be used as ruined houses, a large inn or some similar structure which has suffered as a result of the devastation wrought by war.

The next box contains a set of ‘Ruins’, consisting of 6 painted wall sections and a set of painted fireplace and chimney. Painted in a stone colour, this is a more robust, communal looking building that has been reduced to a ruin. Again, this could be used as the skeleton of one large building, added to other building sections or spread around the tabletop.

The last two boxes are much smaller than the others but no less useful. The Ruined Bridge could be easily combined with other elements to make a suitable scene but, in this instance, is perhaps best used with scenery you already have. The Barricades could be used to place around the ruins or alongside the bridge to create a camp or gallant defence against marauding peoples.

The whole Battlefield In A Box range offers really useful products for the tabletop gamer. The sheer variety is enough to help a whole swathe of gamers across the gaming genres, whether 15mm historical, 28mm Sci-Fi and more.