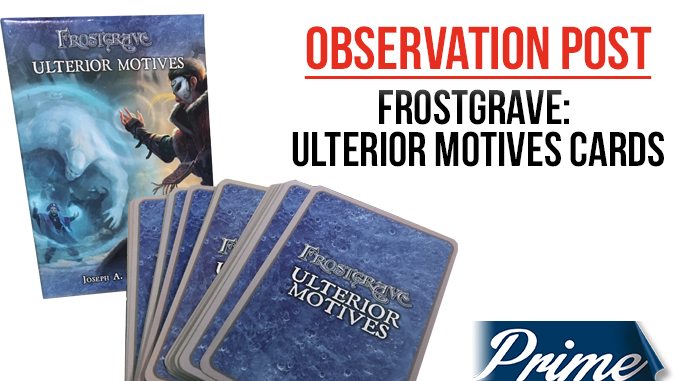 One of the latest releases for the extremely popular Frostgrave fantasy rules from Osprey are these Ulterior Motives cards.

The idea is that the cards add something extra to your games, whether a ‘one off’ or as part of a campaign. These are ‘side quests’ for Wizards and their Warbands, another way to gain XP or objects of power, spells, etc.

Two of the pack of cards contain the rules for using the deck in your games. There are some rules changes but these shouldn’t effect the main action of the game.

Each card has all the relevant game information you need, plus is either Secret to you only or a Reveal to all the players.

For example, this card is labeled Secret, meaning the player undertakes the ‘quest’ without telling the others. A nice touch are the Red Herrings, objects or creatures placed on the table in addition to the scenario related ones – these allow you to ‘bluff’ your opponents into thinking they know what your actual mission is, whilst focusing on achieving the real one.

The card shown here is a Reveal, meaning that it applies to all the players in this game. There are no Red Herrings as everyone has the opportunity to gain the reward. Its basically a race to get some extra XP!

Overall, the cards seem like a fun addition to the game and add that extra layer of ‘adventure’ that Frostgrave players seem to enjoy so much. It’s also a clever way to bring in new rules and ideas to the game in the form of a direct player’s resource rather than in a book format.