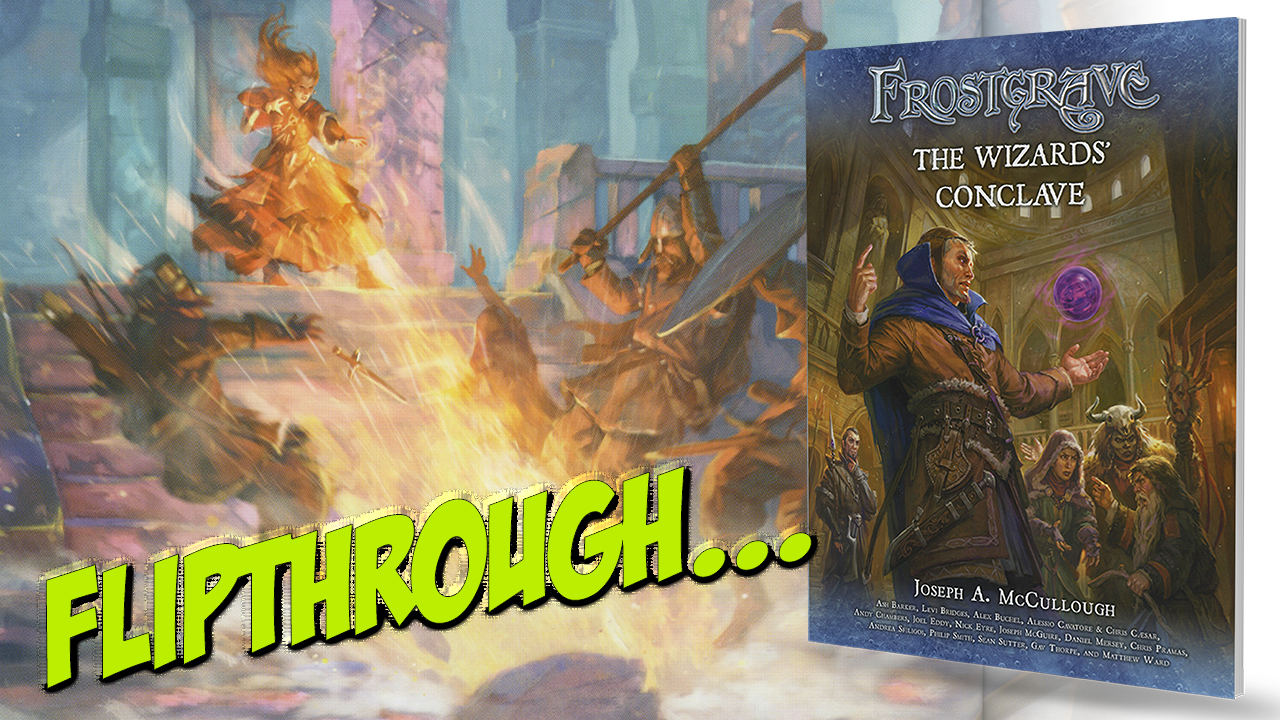 The Frostgrave: The Wizards’ Conclave supplement is the latest in the seemingly endless number of supporting tomes associated with the Frostgrave skirmish wargame. Yet this latest book is slightly different, containing within its 88 pages a whole series of playable scenarios from some of the most well-known games designers and personalities within the world of wargaming.

The Contents page reads like a ‘who’s who’ of game design and manufacture, some known internationally, others on the ‘local’ wargames scene. Joe McCullough explains how the whole thing came about, and the purpose behind its contents, in the brief Introduction.

Each of the ‘stand alone’ scenarios have roughly the same layout, as shown by the first scenario Catch Me If You Can by one of the creators of SAGA, Alex Buchel. The various aspects of the scenario are outlined for the gamer, including any new or variant creatures or magical items. Charts and Special Rules support the scenarios, and there is a handy About The Author section for each section.

Ash Barker’s The Blade Of Barael is one of the three mini-campaigns included in the book. This is consequently a much more involved narrative, with a new foe in the form of the Half-Breed and the extremely powerful Blade of Barael. The scenarios are very much linked, but the whole narrative goes together to make an entertaining tale that you’ll want to be a part of.

The narrative theme persists throughout the book, but some of those stories are focused upon opposing Warbands, like Gav Thorpe’s The House of Tempests and others, like Nick Eyre’s Old Scores are solo adventures. The scenarios throughout the book thus embrace a variety of playing styles and experiences.

Joseph A. McCullough’s Strange Alliances is not only a narrative min-campaign but also adds to the gaming styles explored by the author who created the rules. Rather than opposing Warbands, this adventure requires the players to co-operate to complete it, with four players needing to pool their resources, at least temporarily.

This unique series of adventures created by very different writers is a fitting addition to the Frostgrave stable. Exalted master of game design, such names like Andy Chambers, Alessio Cavatore and Gav Thorpe stand out, but all the authors have added something special to the options for gaming within the Frozen City. With all the other books on the market, and the Ghost Archipelago game world, it’s safe to say that the story goes on and on.

Editor’s Exploits episode 10 – Behind the Awards