Frostgrave: The Maze of Malcor and The Grimoire

Home » Flipthrough » Frostgrave: The Maze of Malcor and The Grimoire
Previous Next
Mark Boam 15 May, 2018 0 comment(s) Categories: Flipthrough, Prime, Unboxing 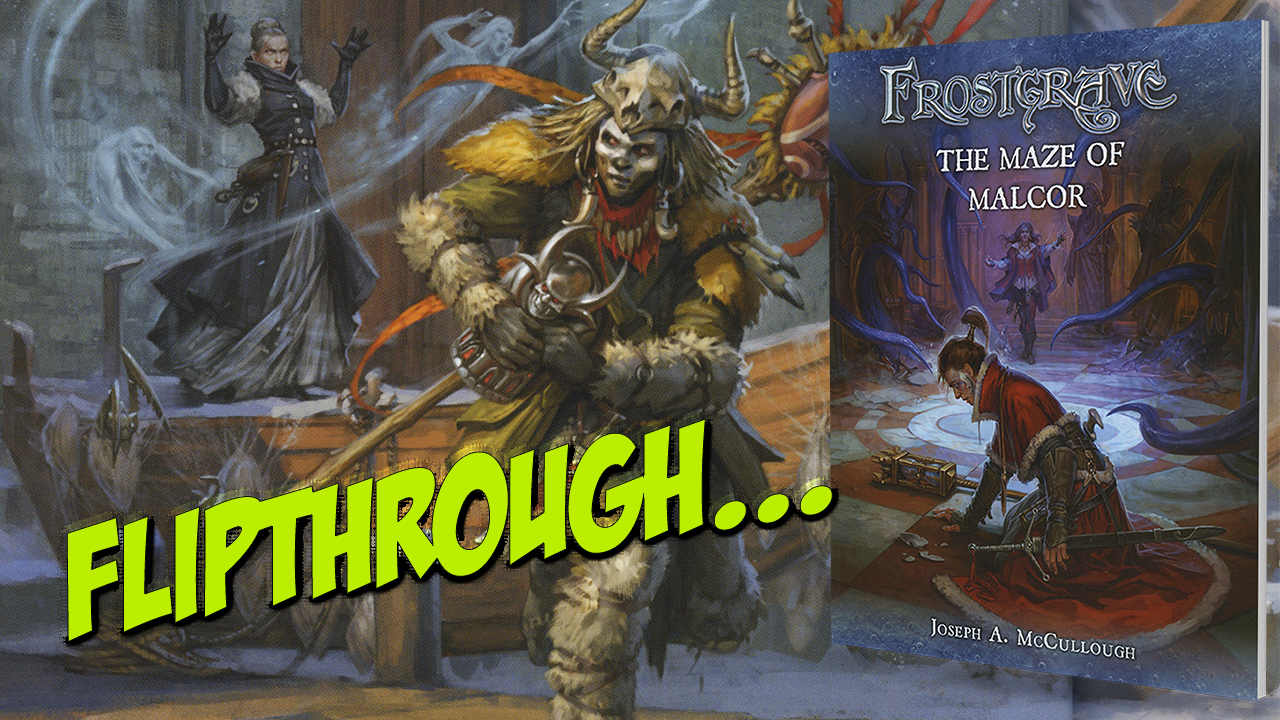 The extremely popular Frostgrave fantasy skirmish adventure game continues to grow. This latest supplement, published by Osprey Games, allows players to explore The Maze of Malcor, once the fabled Collegium, a seat of learning and magic.

A major change for players is the inclusion of a number of Rules Updates. These include new methods for securing Unclaimed Treasure, adding Experience, Casting Rolls, using Scrolls, an updated Uncontrolled Creature Actions flowchart, the oft-requested rules and ideas for balancing Scenarios when there is a mix of Wizard Levels, using Black Market Contacts to buy items and a set of rules for Creating Experienced Wizards.

The next section provides 12 scenarios that are designed to be played out as a ‘linear narrative’. These allow Wizards and their Warbands to explore the strange world of the Collegium, encountering a host of new creatures, treasures and foes. The first 6 scenarios are fairly standard games of Frostgrave, albeit set against a new and exciting backdrop. However, scenarios 7 – 12 offer the potential for some additional variety in that they provide rules for a player controlling the denizens of the Maze, providing a living ‘brain’ to control the ‘baddies’ rather than randomizing everything. Without wishing to create too many ‘spoilers’, some of my personal favourites waiting to be encountered are Sky Gondolas, Bogmen, Collegium Porters, Glass Spiders and the all-important Wraith of Malcor.

Something equally unique in the book is the introduction of the Pentangle, five new Schools of Magic, Astromancer, Distortionist, Fatecaster, Sonancer and Spiritualist. These are lesser aspects than the original ten already outlined and are consequently slightly weaker. The rules initially suggest that they are not ideal fodder for a beginning Wizard character, but then provide the very rules options needed to create a new Wizard from one of these schools. There are also a number of lost spells that may be chosen and used by Wizards.

Of course, whilst exploring the Maze, the aim is to seek out and discover new Treasures. These can be Spell Scrolls, Magical Items, Sky Gondolas and much more. All these new items have full rules and are useful or not so useful during each of the scenarios as you build towards the final showdown. Do you hang on to them to sell later or use them during an adventure to ensure that there is a later!? There is also a new resource which may be used or added to your Warband’s Base, a Gondola Workshop for those who manage to take one home with them…

The Bestiary section introduces the new creatures and beings that are an integral part of the Maze, the wanders and the lords of the Collegium who lurk to trap the unwary or those who lack caution. All the rules and other details are here for use in each scenario and more.

Of course, with all these new spells and magic items from this and the other supplements, it’s hard to keep track of them all. That’s where the new Frostgrave: The Grimoire comes into play, literally. This set of cards contains all the rules for every spell found across all the books, from the core rulebook through Thaw of the Lich Lord, Into the Breeding Pits, Forgotten Pacts, The Frostgrave Folio and right up to date with The Maze of Malcor. An important aspect to note is that these cards clarify those rules where errors or omissions were made in the initial rulebook and supplement. To that end, the rules on these cards supersede those previously printed.

Also released is Oathgold by Matthew Ward, a novel that charts the adventures of Kazran, a bounty hunter who uses magic to hunt his prey. However, this time he may be working for the wrong side of justice…

Maze of Malcor supplement contains a great deal to interest Frostgrave players. It not only adds new types of adventure in a different aspect of the Frozen City, it also has a number of new rules and clarifications that can only help to enhance the gaming experience. The Grimoire spell cards are now the main reference for the most accurate rules for spells and wizardly abilities, so they are also pretty essential. And, of course, Osprey Games’ partnership with North Star no doubt means that there will be a whole host of new miniatures to add to your collection of heroes.