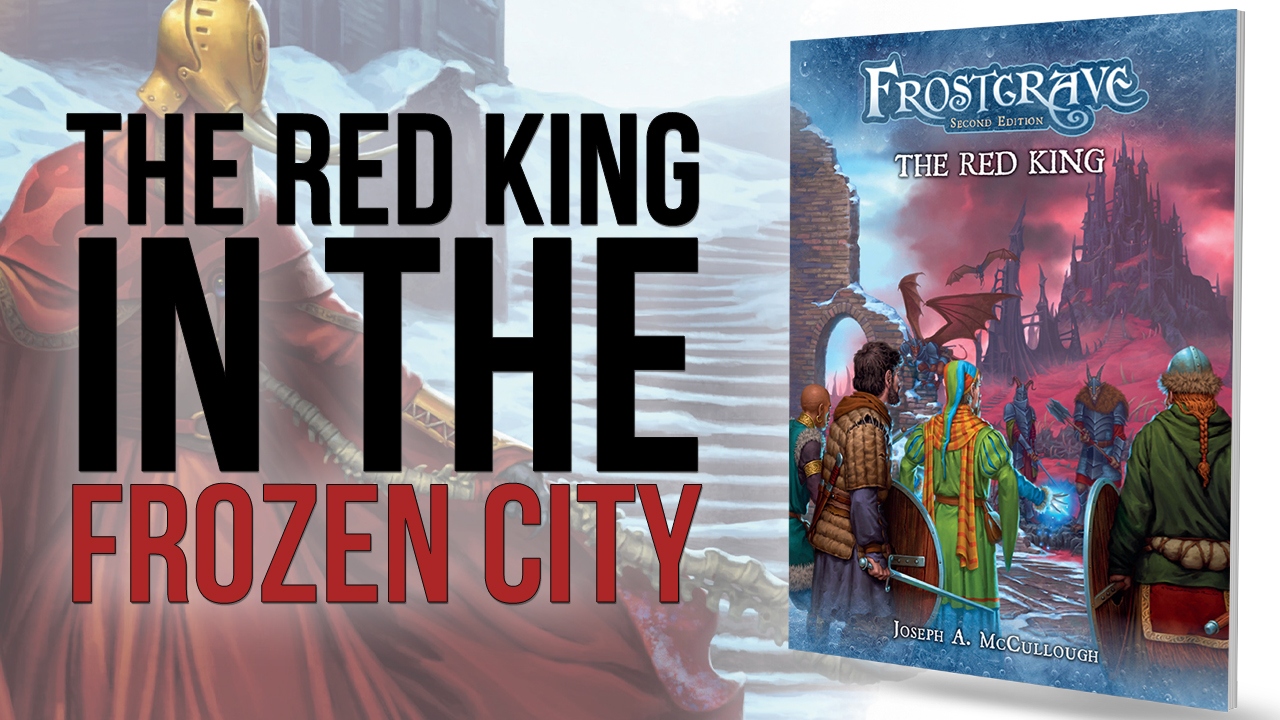 We’re always keen to undertake new adventures in Frostgrave and with The Red King we have the first supplement to the game’s recent second edition. It’s written by game and world creator Joe McCullough, published by Osprey Games, and within the vibrant softback cover are 96 pages of new rules, stats, and campaign details.

The introduction, across pages 4 and 5, describes the motivation and goals behind this supplement, then we get to the first chapter, The Invasion. It (the chapter, not the invasion) starts on page 7 and takes us back in time, through the millennia, all the way to the cataclysmic demise of Felstad, long before it would gain its new name of Frostgrave.

It turns out that as the city was experiencing its rapid destruction a small cabal of the city’s wizards took a self-serving action to guarantee their survival. In so doing they made a pact with a demon – the book’s eponymous Red King – and damned the already rather damned city of Frostgrave to a new doom.

So, getting back to Frostgrave present, the Red King is coming and wants to merge the Frozen City with his own pocket dimension. We have to congratulate him; we didn’t think that Frostgrave could get much worse but somehow Mr King found a way!

The first additional rules arrive here – Reality Cracks – and these are used in just about every game set in the time of the Red King. The longer a game runs the more likely it is that cracks will appear and the tables on page 10 are used to determine when that happens. Once reality is torn asunder the battlefield will change. Joe’s got a cheekily named ‘string theory’ note that details how you can use lengths of string to divide the table in different ways. Commentary from the author runs through the book.

The Reality Cracks list has 20 outcomes across pages 11 to 18. These are incredibly varied – gravity can change, impacting movement; space can explode, moving and injuring those around; a cloven hoof may descend from above and wreck those below; or reality can shift spatially, forming a polyhedron that players must navigate. It’s a varied, exciting, unusual list of options and this section, as with the rest of the book, is illustrated with fine art and atmospheric scenes of miniatures doing battle.

Next, on page 18, we get into Ragged Warbands. This covers how warbands will (once the seventh scenario in this book has been played) become isolated, and must deal with injuries, treasure, and recruitment differently to normal. This is more good stuff, adding extra tension to proceedings. A couple of little quibbles we have though:

1). As with the Frostgrave: Second Edition rulebook there are boxouts in blue – snippets that add eclectic tonal and narrative teases to the book and tasters of background. They largely work, the text does anyway. The sharp-edged blue box around it is about the least thematic way it could possibly be displayed. It’s a bit like these curious tidbits from the Frostgrave world are part of a Powerpoint presentation – weirdness like “Just a chest full of three-fingered gloves …” or “It was those sisters – you know, the chronomancer girls – cast some spell that gave us all these long beards and then disappeared into the ruins …” deserve better!

2). Tables are sometimes huge, when they could take up far less width and be compacted to take up less space.

With that said, it’s time to get back to the stuff we don’t have any minor quibbles with, as we move to chapter two, The Red King: Act One, which starts on page 24.

The voice of the Herald of the Red King is in your wizard’s head here, kicking off the book’s many scenarios, giving your warband motivation to get active and investigate these unusual new circumstances. Life in the Frozen City is at its usual levels of weirdness but more of the story is revealed to your warband. The Veil of Unreality is the one that stands out – it is designed to be played multiple times with players alternating between control of their warband or the forces of the Red King.

Chapter three is where The Red King: Act Two starts. After a glorious bit of art on page 32 the story expands further in three more scenarios. As with much of Joe’s design work, each scenario has its own elements bringing character and interest. From the special rules, varied treasure and experience gained, to the new berserkers, Hrut, portals, special characters, and more that you’ll include (we’ll talk more about them later when we get to the Bestiary) there’s loads to keep things fresh, exciting, and challenging.

Page 42 is the point where the Red King’s presence is fully realised and the new threat changes up the way you will play games. Those aforementioned Ragged Warbands rules kick in as players attempt to escape a veil that is closing in around the city.

We wonder if Joe might have filled his non tabletop gaming time with some battle royale videogames lately. The ever-decreasing safety zone, forcing players to a climactic, desperate finish at a centre point, with supplies become scarcer, is present in that popular genre and seems to have inspired The Red King’s last act.

Scenarios seven to twelve cover the players’ progress to the centre of the doomed city, with the opposing forces of the Red King getting stranger, more elite, and more numerous. Nullmen join the fun, ethereal tethers make for strange movement options across table edges, and finally you’ll reach the Ringworld of the Red King. Things conclude on page 62 with The Red King: Epilogue.

But the book’s not done! Chapter Six – Treasure – addresses all of the new goodies players can get by rolling on the Red King’s Treasure Table. The descriptions of these treasure items run to page 73 then it’s on to Artefacts, even rarer magical treasures through to page 85.

The final chapter is the Bestiary and it’s here that the many new Red King combatants are found. Barbarians get the ‘blood-mark’ that binds them to the Red King, there are Burning Men, Foulhorns, Keymasters and Heralds, various Hrut (a new demon type race who are particularly aware of magic users), and the strange Nullmen. Add the creature traits to these ‘baddies’ and you’ve got a ton to play with and a great new supplement.