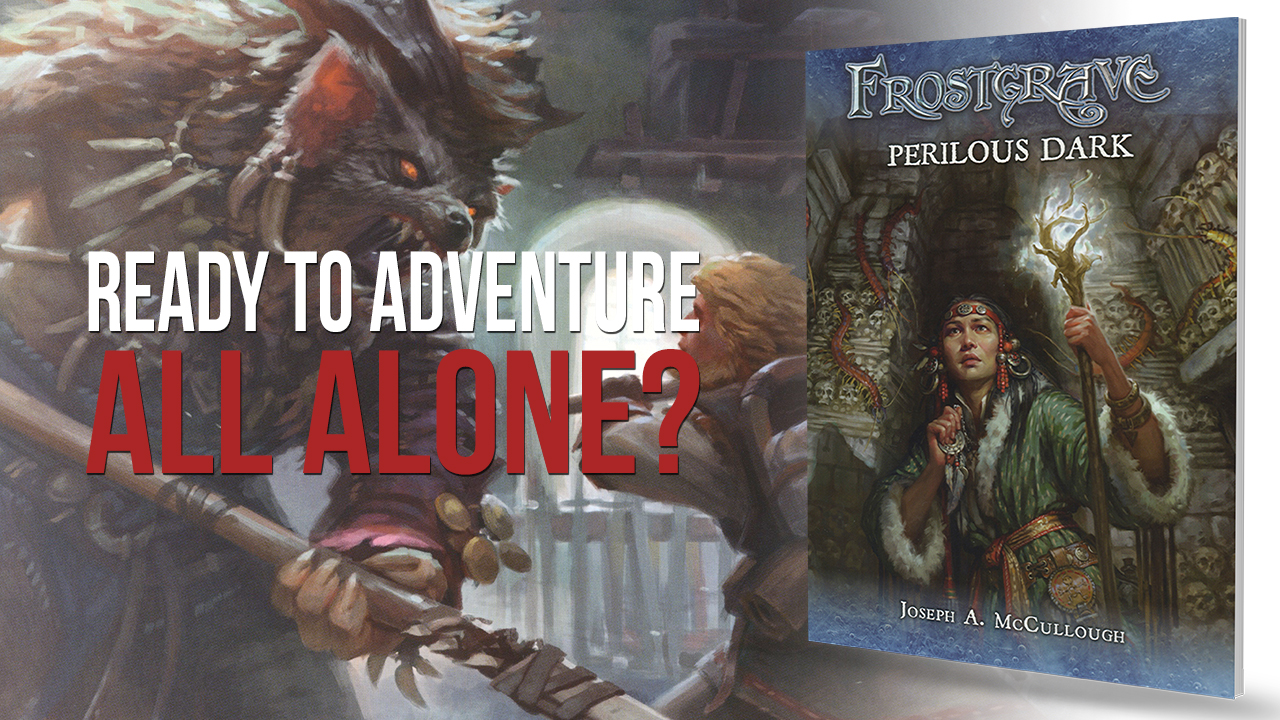 The latest supplement in the Frostgrave series is Perilous Dark, a set of rules and scenarios which allow for something different, solo and cooperative play within the frozen city of Felstad.

The book begins with an introduction from the author which both explains and expands the Frostgrave ‘universe’. In essence, the beginning of the book explains the basics of how to play out a normal game of Frostgrave as a solo player, and subverting the more competitive aspects of the game to create an environment where each Warband works together to complete a scenario. To this end, the supplement discusses the best ways to provide game balance for such games, and how to boost the impact of ‘random’ creatures within the typical scenario. There are also rules for different spell effects and which spells won’t work without adjustment. Chapter One then moves into the ‘art’ of designing solo scenarios, with handy tools for adding a sense of urgency, a series of ‘spawning’ rules for opposing monsters and the first of ten scenarios that aim to allow the player to see and use the rules changes and suggestions in action.

The scenarios follow the same format, with suitable set-up, special rules and even modifications to raise the adventure from a solo outing to a cooperative one. Once you’ve played through the first few scenarios, there are new rules for such matters as traps and obstacles. The next few scenarios explore these rules.

Again, having outlined how to use new or adapted rules, we have another set of scenarios to test them. One particularly interesting aspect is the use of Room Cards, more akin to an RPG concept than a wargame adventure. This is expanded into the concept of Dungeon Cards, and how to randomly generate a dungeon to explore. Again, these rules are explored using fully detailed scenarios, which takes the book up to ten ‘training’ scenarios in total.

The remainder of the book consists of new magic items and a bestiary full of new creatures and dangers that can be encountered, and hopefully defeated.

Like all the supplements in the Frostgrave range, author Joe McCullough has added additional layers to the game which take it into new directions and offer the gamer extra options. Joe’s writing style is very gamer friendly, and the use of the ‘concept, then try’ style makes the new rules very accessible. Add to that some great photography and artwork, and we have yet another fine addition to the Osprey Games stable.