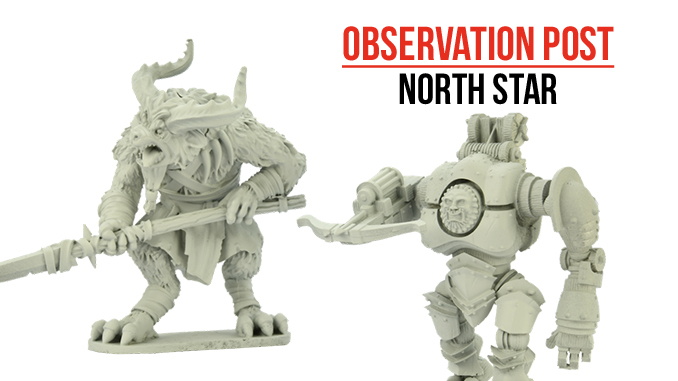 In an industry that sometimes seems full of Kickstarter campaigns, North Star Military Figures say ‘nay’ to such things and have invented the ‘Nickstarter’.  Basically, this is a pre-order programme run by the company and aimed to provide miniatures for some of the game releases on the market, most notably for tabletop games from Osprey Games. Two upcoming parts of the latest Nickstarter are figures representing two of the ‘monsters’ from the Frostgrave: Perilous Dark campaign book.

The first figure is the Ballista Construct. Based upon the artwork provided in the campaign book, this is a large figure, a mechanical ‘robot’ powered by magic. It fires a large ballista or crossbow which forms the majority of its right arm, using a system of weights and pulleys to reload as it goes. It has some elements of the gorilla, but is a more upright, implacable, emotionless being which strides forward without mercy.

The second figure is the antithesis of the first, Borock, the half-gnoll, half-minotaur beast which leads the gnolls in their actions. Part rage, part animalistic cunning, and all dangerous, the Borock figure wields a glaive-like spear and is a vision of fury, again based upon the excellent artwork from the book.

The plan is to add a number of figures to this range, covering the other beasts and adversaries for the Warbands as they embark upon their adventures. The upcoming Nickstarter will be an opportunity to get hold of them, allowing gamers to fully immerse themselves in the adventures to be found in The Perilous Dark…