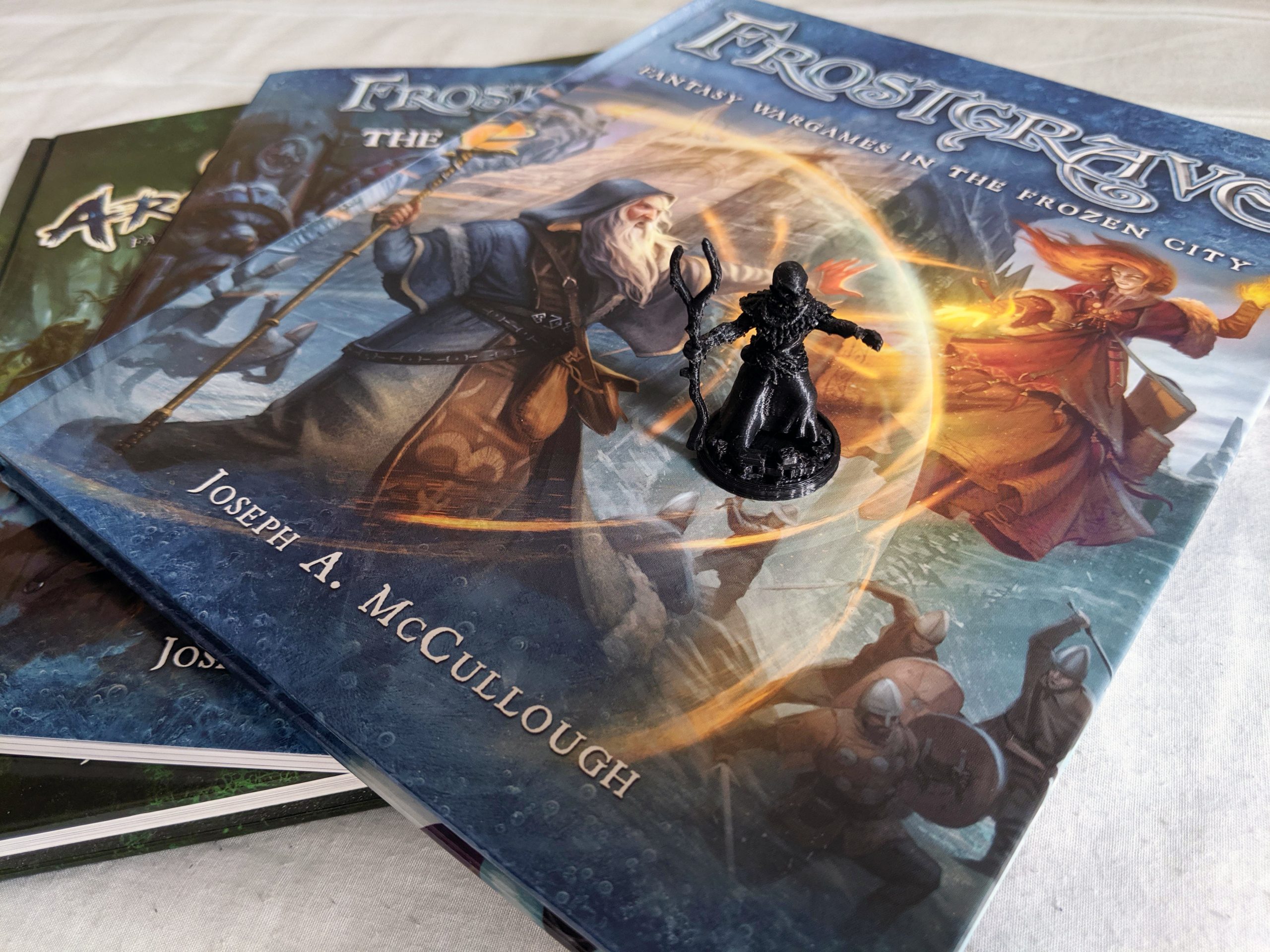 Way back in late 2014 early 2015 I was asked if I wanted to try out a new “top secret” game with the North Star crew. Always one to try something new I said: “yes, why not?”  The top-secret game turned out to be an early version of an upcoming set of Osprey Publishing rules called Frostgrave by Joe McCullough.

Frostgrave is a fantasy skirmish game based around the ruined frozen city of Felstad. The players control a warband made up of around 10 figures based on a wizard, their acolytes and helpers. The aim of the game is to compete with other warbands to find lost treasure and magical items in the ruins.

After the first couple of games we picked it up pretty quickly. The consensus was that it was a fast, fun game.  It had the bonus of only needing around 10 figures in a warband, so it was well within the abilities of even the slowest painter to knock up something to play with. We also, very quickly, found it needed to have a lot of scenery to hide behind, or your warband wouldn’t last too long.

The plan was for a group of us to get familiar enough with the rules to run ‘tester’ participation games at upcoming wargaming shows. This would help to get people familiar with the game in time for its release and to showcase the plastic and metal figure range designed to accompany the game by North Star Military Figures.

With this in mind we tweaked the rules for the tester games by reducing the warband size, removing the apprentice and limiting the spells available for each wizard. Doing this meant we could run a game in less than an hour, allowing the maximum number of players to have a go at a show. The tester games were a great success, we were guaranteed to have at least three different players every game and to get through between four and six games every show. The game itself was well received by a wide range of players, especially parents starting their children in gaming. We continued to put on demo games, later using the full rules at shows. I also played in a number of campaigns at the club.

Frostgrave went on to be highly successful and spawn a number of supplements and expansions. It even has its own novels based around the frozen city of Felstad. Frostgrave proved itself to be a perfect game for a club night with enough depth to allow continued play. Its easy mechanics, married to a good campaign setup that allows you to level up your wizard, makes for a game  you can invest some time in mastering.

BACK INTO THE FROZEN CITY, WITH TREPIDATION ….

So, it was with some trepidation that I took on the task of having to put together this article on my first look at the new rulebook and discussing my thoughts on the changes. How could you improve on such an iconic fun game I thought?

On the first flick through I couldn’t really tell a great deal of difference.  The artist for the colour plates has changed and there are, as usual, lots of nice photos of painted minis. As with the original, the book is in Ospreys hardback format but has grown by around 100 pages.

The game phases, split into Wizard, Apprentice, soldier and the creature phases are still as they were in the original. The melee combat and shooting mechanics are pretty much the same. As are the Wizard, Apprentice and the soldiers stat lines. So not much of a difference?

It was only after reading through the rulebook in more detail I discovered where the differences have been made. Most of them are quite simple, but are designed to enhance what’s already there and to take some of the quirky unfairness out of the game.

Firstly, unless you are playing a specific scenario, the treasure placement has been changed. Previously each player could place three treasure tokens and, providing they were 6″ apart and not within 9” of the board edge, they could place them wherever they wanted. The players would then have to then roll to see which side of the table they would start from. This could cause some issues where people placed treasure in easy to reach areas on the board then just ran on, grabbed the treasure, and ran off again. This really isn’t in the spirit of the rules and makes for a frustrating game.  The treasure placement has now changed. The rule is far more prescriptive and limits the number of tokens in a standard game to five, not three per-player.  It also mandates that one of these is a central treasure token that must be in the middle of the board. This has the effect of forcing the players to push to the centre. Making them more likely to encounter one another if they want to get more tokens than their opponent, not just scurry on without seeing the other players.

There is now optional rule which introduces a balancing scenario. This is aimed at helping to mitigate the problem in a campaign where one player falls behind in levels, either by bad luck (getting your Wizard killed on a weekly basis) or by missing a couple of games. This can leave a player behind in levels which means it becomes difficult for them to catch up. A significant level difference between wizards places the lower level player at a disadvantage. The new rule allows for a random creature to be put into play in the control of the lower level player.  This is treated as one of their warband for the duration of the game.  The difference in levels determines the power of the creature. I can see this giving a boost to the lower level player without skewing things too far in the wrong direction.

There are some new additional rules that cover things like swimming, which were left out of the original, helping to plug some gaps.

There are new sections that clarify and summarise combat and shooting at the end of the relevant chapters. These, added to the original pictograms, are useful additions for the novice player, helping to spell out how everything works.

The original version included 10 well-rounded scenarios that you could work through as part of your campaign. These originals, such as the Mausoleum, are all included in the book plus there are now an additional 10 new scenarios which I don’t think have been seen before.

Perhaps the most significant change has been to the spell section. Joe has gone through every spell in detail to determine how ‘useful’ it is. All the spells have had their explanations tweaked to make them easier to understand and to clear up any contentious issues (e.g. Push has an expanded explanation that makes it clear that, yes, you can push someone into the air if they are standing above you).

Spells which were seen to be a bit too powerful have had their casting chance raised. Spells which were too difficult have likewise had their casting chance lowered. In some cases, spells which essentially did the same thing have been amalgamated into one (for example Reveal Invisible has been changed to True Sight, which also allows some protection against the Beauty spell). This overhaul will make a difference to which spells players choose and use.

The most the most subtle difference I noticed was the whole book has been rearranged in a way to make it all seem to flow better. There isn’t a sea change to the original source material but on the whole, it seems better laid out and easier to understand, if that’s possible.

In conclusion the new version of Frostgrave takes the core original rules, keeps the good stuff, clarifies the unclear bits, adds some new rules designed to balance campaigns, totally revamps the spells and explains how you can use all the existing supplements. Overall, I think it strikes the right balance and will make a welcome addition to the Frostgrave canon.