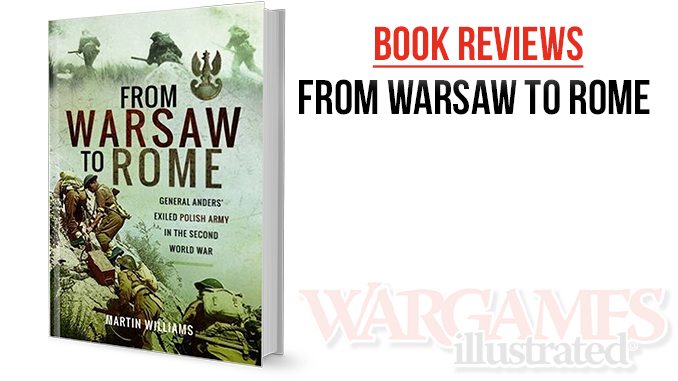 The story of the Polish in World War II is familiar to many; from the ignominy of being the first victims of the German Blitzkrieg to their triumphant participation in the freeing of Europe, and ending with their betrayal by the Allies. Martin Williams sets out to add some flesh to one part of this story, that of Polish II Corps that fought with distinction through Italy (and would have maybe fought earlier if politics was not involved). Consisting of 276 pages of text along with an additional 16 pages of black and white photographs, a comprehensive Notes section, the Polish Orders of Battle, and an excellent Index, From Warsaw to Rome covers the origins of the Polish II Corps all the way through to its disbandment in post-war Britain.

Williams has a real passion for the subject in hand and has really put the effort into researching the subject from all angles. The transcript of the conversation between Stalin, Anders, and Sikorski shows this and adds real insight into what happened to help the Polish get from Poland to the Middle East and ultimately Rome. Throughout the book there are excellent maps showing where the action took place, and also tables showing formations and their contents. These tables are further supplemented in the Order of Battle appendix and Personnel/Equipment appendix. They in turn are full of detail about what made up the Polish II Corps and the equipment they had, which is an absolute goldmine for the historical gamer and possibly the most comprehensive I have ever seen. As a small aside, I appreciate the care taken to use the Polish alphabet for Polish names and phrases, this is a nice change to many other English language texts!

The book can be a little dry, although that is almost expected in this kind of work, and does not always explain itself well. It has also strayed too far towards the Polish viewpoint where a bit more balance would have been preferred. Ending the book at the capture of Rome is too early for me because there was still much fighting to be done, which is dismissed in a couple of lines of the final chapter. This does a great disservice to the Polish II Corps – not everything is about their most famous action of capturing Monte Cassino!

From Warsaw to Rome is a wonderfully crafted book with only minor issues, covering the Polish II Corps in great detail. Once you get used to the writer’s style it is an enjoyable read with many snippets that capture the imagination. The description of the patrols around the River Sangro are real gems, perfect for new scenarios using something like Chain of Command. The Battle of Monte Cassino was covered well by Flames of War in its previous edition; however, I would like to see the battle done in a smaller scale maybe using Spearhead. This is a great read and a must for anyone interested in the Polish II Corps or the fighting in Italy. The comprehensive Order of Battle also makes it a great starting point for collecting a specific force for any related game.