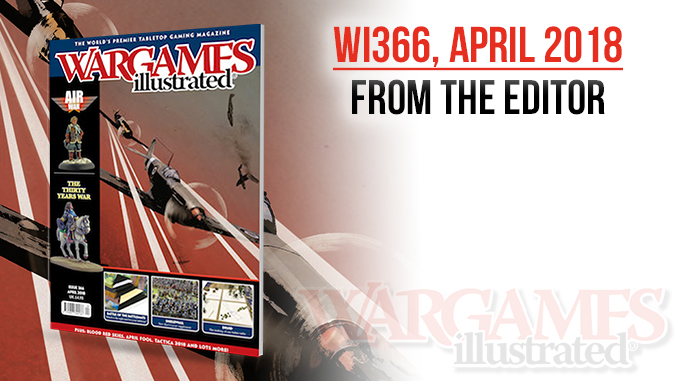 When it came to choosing the theme for this month’s issue we had two clear contenders to choose from; 1) The Thirty Years War – to commemorate 500 years since the beginning of this tumultuous European conflict. 2) Air War – to tie-in with the release of the Battle of Britain arial combat game Blood Red Skies. We were keen on both, and whilst musing on which to go for our contributors began supplying us with some great articles on both! So, we decided to split this month’s theme between these two unlikely bedfellows – in a celebration of the diversity of our hobby.

We have five Air War articles for you, featuring; the World War One air-to-ground war, a World War Two Blood Red Skies bomber squadron game, the fight for the skies over Vietnam, the first helicopter assault and comic book hero Johnny Red.

For the 500th anniversary of the Thirty Years War we present three articles on collecting figures for the conflict and gaming the Battle of Rocroi 1643.

Even with two themes we have plenty more besides, including a report on my trip to Hamburg’s Tactica, a Battlemat battle, the making of our Salute table, a Rules Showcase for Shieldwall and more besides.