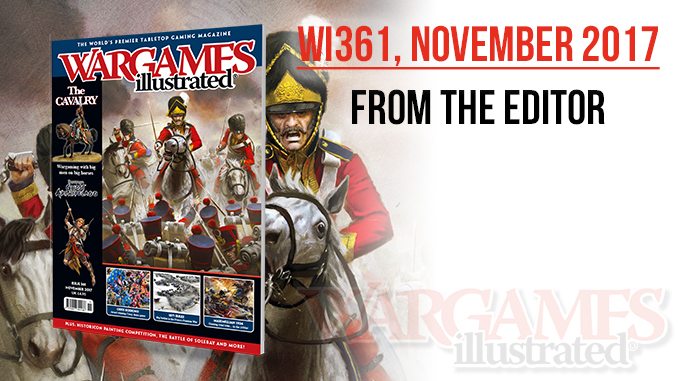 Who doesn’t love a good cavalry change? Whether it’s pounding the earth with your Scots Greys as they charge forward in a Black Powder Waterloo game, sweeping around the flank with your Seleucid cataphracts in Swordpoint, or performing a reverse twist and musket discharge whilst standing on the back of a moving steed in a game of your own devising – it’s all good stuff!

For the theme of this issue of Wargames Illustrated, we explore cavalry on the battlefields throughout history, on the tabletop and on the painting table. We’ve got cavalry at Waterloo, in the First and Second World Wars, across America and in medieval Europe.

Away for the cavalry we have a Rules Showcase in which we take Mad Maximilian
for a spin and have great fun playing this 1930s slant on the Mad Max movies. We are
also lucky to have an exclusive scenario by author Joe McCullough for his new
Ghost Archipelago rules.

For this month’s Designers Notes we are joined by our friend from over the Pond Bruce Weigle, who tells us about finding the game he’s been looking to create for years, in the form of 1871. This issue also sees the conclusion of our excellent James II series, with the Battle of Sole Bay, and we have a couple of articles which are very easy on the eye, in the form of The Bodkins’ Battle of Crecy game and El Hammad, which features some lovely shots of the Perrys’ Napoleonic Brits in Egypt.