From Slaves to Soldiers 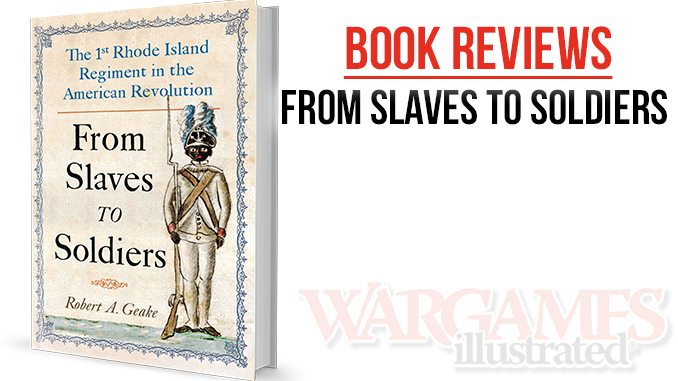 From Slaves to Soldiers
Robert A. Geake
Westholme Publishing, 2016
Reviewed by Neil Smith

In From Slaves to Soldiers, Robert A. Geake tells the story of the 1st Rhode Island Regiment in the American War of Independence. He follows the men from recruitment, through their various battles, and finally to their disbandment after the war. The story is quite familiar but what makes the Rhode Islanders stand out is that most of them, but not all, were slaves promised manumission in return for their service – their owners received a bounty. The inclusion of slaves in the regiment was the idea of Brigadier-General James Varnum when Washington’s army was at its lowest ebb at Valley Forge in the winter of 1777. Not all agreed with Varnum, however, especially among white Southerners whose fear of slave uprisings trumped their support for white ‘liberties’. Nevertheless, Varnum got his way. The regiment fought in some major battles, including the Battle of Rhode Island in 1778, and were in at the death when the British capitulated at Yorktown. The men’s stories continued after the war as they struggled for their pensions and to receive the recognition they richly deserved, a fight which is sadly still ongoing.

Geake, and his writing partner Loren M. Spears, weave a fascinating tale from seemingly quite sparse sources – like the soldiers they describe, they did they best they could with what they had. The story is an important one not just for the local history of Rhode Island’s contribution to the war but for the wider picture of American confusion over their shared inter-racial heritage, reaching back to the Revolution and beyond. However, as necessary as this book undoubtedly is, it falls just short as a social history and equally so as a military history. Other than one contemporary, painted image, there are few descriptions of the men at war other than a tantalising glimpse when they take their coats off to fight in one battle. That also brings up the question of how they fought as opposed to the much more sensitive debate on how well they performed in combat. Maybe we simply do not know, but public histories allow for a bit more imaginative flexibility that could have been deployed here to make this a fuller account. Other than a couple of accounts of battles, better described elsewhere, there is little to offer wargamers in From Slaves to Soldiers. Wargamers might also take away a reminder not to make assumptions when reaching for the Flesh paint, while military historians will gain an insight into the type of war the American Revolution often was when viewed from a different, more localized, perspective. If the Revolution is your thing, therefore, then From Slaves to Soldiers will certainly add value to your understanding.