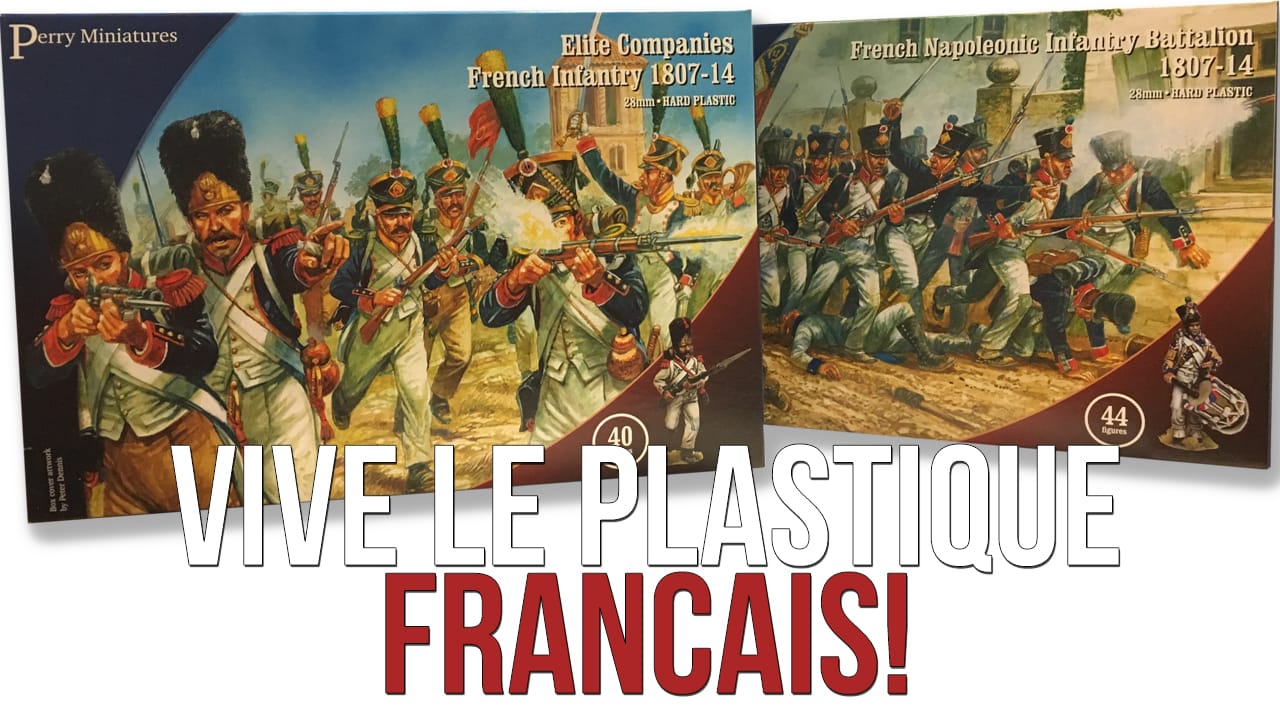 As we barrel towards Christmas, it’s good to know that Perry Miniatures have managed to release the perfect gift for those who enjoy gaming with their French Napoleonic armies. The new French Napoleonic Infantry Battalion 1807 – 14 and Elite Companies French Infantry 1807 – 14 are boxes of hard plastic, self-assembly figures which come with such a variety of options that even the most jaded gamer will be inclined to invest.

The French Battalion box contains six frames of infantry with five ‘bodies’ per frame. Each frame contains enough parts to depict Fusiliers or Elite Companies in marching or attacking poses, depending upon the arm and head choices. These figures wear the long tail-coated uniform jacket, and carry the standard French knapsack of the period.  The tails of the coat and knapsack are moulded together on one piece, and are designed to fit into the space provided on the rear of the figure.

Also included in this set are two frames of Elite company troops, with four figures per frame. These frames are designed to be assembled in active skirmishing poses, with running and firing options and suitable heads to field Voltigeurs wearing their dress shakos.

A final frame is full of command figures, allowing for the creation of six miniatures, with the option to put together an officer, standard bearer, sapper, bugler / drummer and halberd wielding guards. This frame probably has the most options in terms of heads, weapons and more.

Also included in the set is an excellent colour guide for a number of different regiments, plus flags and basing suggestions. A set of square and rectangular bases are also included, in order to field the battalion.

The Elite Companies boxed set has six frames of the four figure skirmishing miniatures mentioned above, plus 2 of the marching and attacking pose frames with five figures each. There is also a large, multi-option command frame. Rather than encouraging the creation of the solid ‘block’ of an infantry battalion, this box aims to provide individually based models for skirmish-level games or to be fielded before the advance of the regiments. Again, the (same) excellent painting guide is present, but the bases included in the box are of the single, round variant.

The overall quality of sculpting, frame layout and injection molding of the figures is excellent. Although these are multi-part plastics, they are designed to fit together fairly rapidly. More importantly, the wealth of options available on the frames means that a whole variety of different figures can be created. They would grace any 28mm French Napoleonic army, whether fielded as a battalion or as a small skirmish unit respectively.