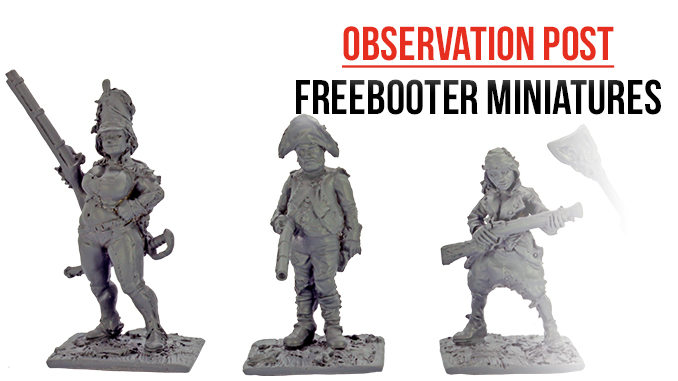 Another manufacturer we caught up with a Tactica in Hamburg was Freebooter Miniatures. They always put on a good show; cosplaying, and running games using their Freebooter’s Fate rules system and, as always, displaying their game and figures on excellent terrain.

This year they were showcasing their new Debonn faction, largely based upon the French Napoleonic Army.

The first boxed set consists of four miniatures representing the armed forces of this group. All wear vestiges of Napoleonic style uniforms, although, in the case of the two females, adapted for service in the tropics. There is a gloriously morose looking male soldier in full uniform, which is a nice contrast to the gleefully dangerous looking islander whom has a war club and the remnants of a uniform jacket over his broad shoulders.

Available as a separate figure is Clisson N. Bonnet, leader of the Debonn Grande L’ Armée Still popular amongst the ordinary people of Debonn, he works day and night on his plan to recapture Debonn.

All the miniatures in the Freebooter’s Fate range come with stats cards to include them in the game. In addition, there is an accompanying rules supplement for Debonn, which is currently only available in German but should be out in English at Salute.

Check out some photos of their demo game from Tactica below.