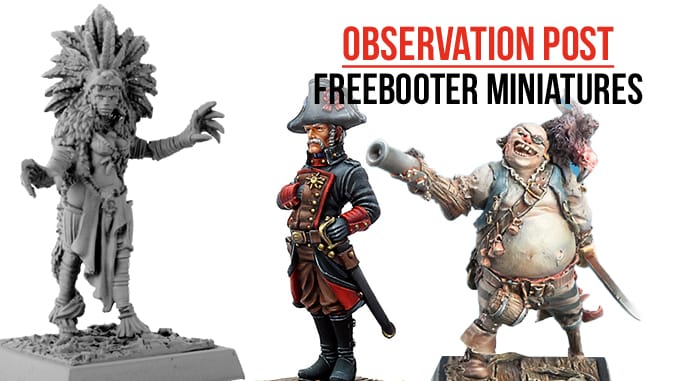 Freebooter Miniatures continue to support their Freebooter’s Fate miniatures game, which is soon to be published in its 2nd Edition. There are various factions that form the background to the game, and there are figures released for each one of them on a regular basis.

We’ve chosen three figure packs to review from those given to us at Crisis. Each figure comes as either an individual casting or in a pack of two. The metal figures sometimes require a small amount of assembly and come with a themed metal base to place over a square plastic base. They also come with a character card for game usage, complete with suitable stats and other information.

The first figure is perhaps the most exotic, drawn from the Amazons faction. AMA 026 Quamitzl is a female figure dressed in the Incan or Mayan style, complete with feathered headdress and suitable clothing for a hot, humid environment. The arms come as separate arms, and the fingers are tipped with vicious looking claws.

The second figure is PIR 032 Lieutenant Krud, a large male figure from the Pirates faction. This is an eye-patched, wooden legged ‘rotund’ character who wields a large calibre pistol in his right hand and a comes with a separate left arm with a hand holding a cutlass. A diseased looking vulture sits on his left shoulder, in place of the more traditional parrot.

The final figure is Victor Droiture, a fine, upstanding member of the Debonn faction. Attired in a fine uniform, his left hand thrust into his jacket, this man optimises the veteran officer or agent of justice, experienced, calm and relentless.

These are exceptionally characterful figures, as is the entire range. Anybody with an interest in RPGs or tabletop adventuring could do worse than explore the company’s website.