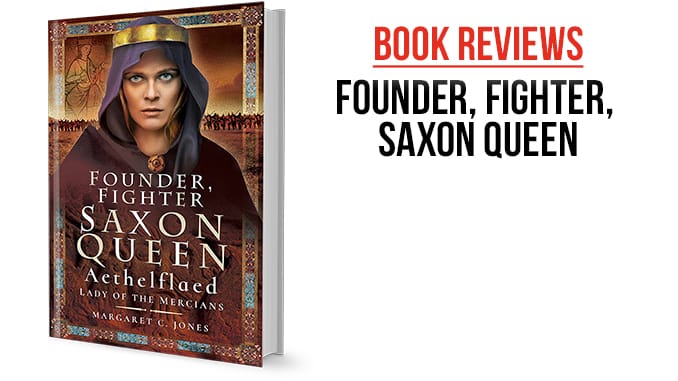 Coming in at the 1100th anniversary of Aethelflaed’s sudden (and suspiciously convenient) death, this book manages to paint a vivid picture of the life and times of a neglected heroine. Too often dismissed as an interim solution, as “daughter of Alfred the Great”, “widow of Aethelred”. Whether she was a queen at all may be up for debate, but she certainly ruled Mercia for ten or more years.

And, here she becomes interesting for wargamers, she kicked Viking backsides left, right and centre, transforming Mercia into a definite power to be reckoned with along the Welsh border. The Vikings of York were even ready to accept her overlordship – a diplomatic move to prevent costly war. Yet in times where every Viking army, in reenactment or on the games table, seems to field scores of History-TV-inspired shieldmaidens, Aethelflaed seems to be almost forgotten.

Jones’ book should go a long way to amend this. It is fact-filled, provides a vivid picture of the life and times of this female Saxon ruler, and can even double as a travel guide for the curious. Having said that … often the author uses conjecture, veers to the edge dividing history from historical fiction. This makes the book highly readable (and brings the events to life), yet may leave a wide opening for discussion. Take it with a grain of salt – the documentary evidence is sparse, and at times muddled.

Who should read this book? Everybody with an interest in the power struggles tearing Britain apart during the Early Middle Ages, and especially wargamers wanting to field a Saxon army with a female leader … after all, the illustrations even include a 28mm Aethelflaed. So, no excuse for SAGA players who want to add the nearest equivalent to Boudica, Elizabeth I or Maggie Thatcher to their Saxon warband.