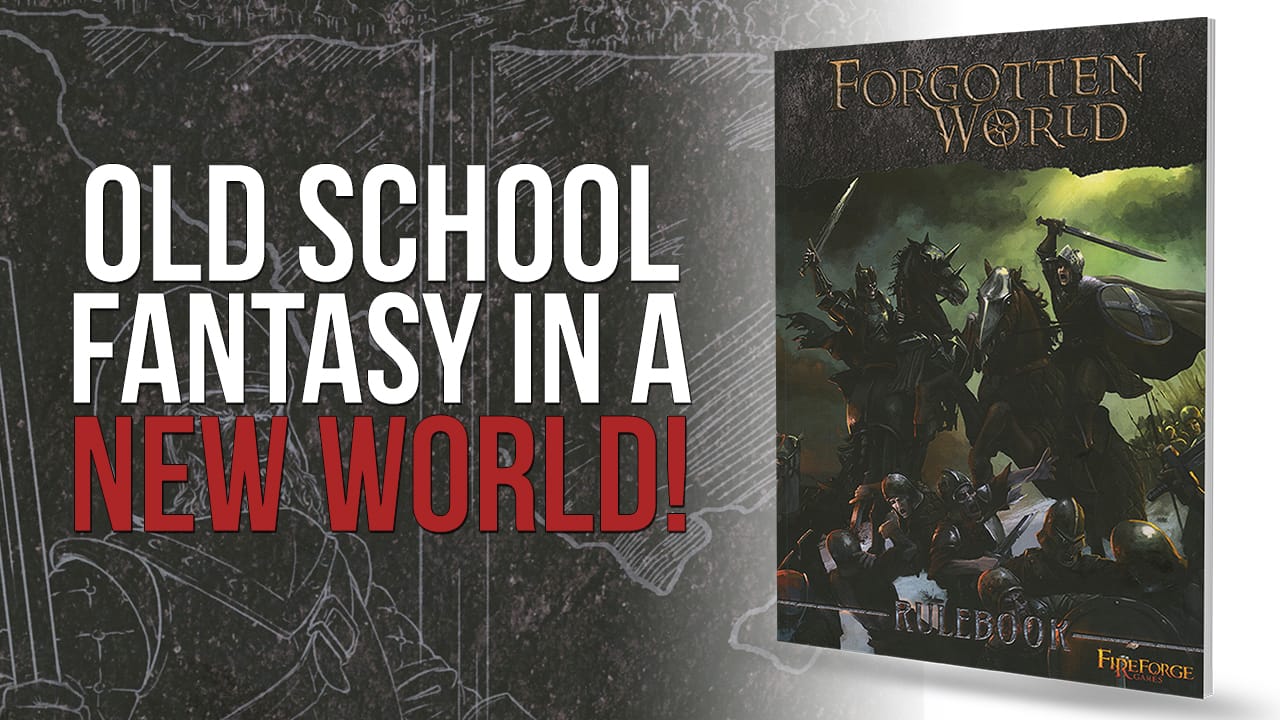 These new fantasy rules from Fireforge Games are actually two sets of rules in one. The Forgotten Worlds rulebook is 80-pages and offered in a softcover format. This is fundamentally a two-player game, with the option to add additional players if required.

After a brief introduction which provides a basic guide to what is needed to play the game, the book outlines the rules which are shared by the two sets of rules, Adventurer, a skirmish level game, and Conqueror, the mass battle version of the game. These shared ‘General’ rules cover unit stats for either Single Models and Teams in the Adventurer set and Single Models and Regiments in Conquerors. Weapons, Battle turns and movement are also outlined, with a suggestion of variations for each particular set of rules. Spells for the Magic Phase are shown and outlined, plus coins or points costs, setting up battles, deployment diagrams and the use of terrain.

The Adventurers rules consist of 11 pages, and cover the various aspects of this version of the game. This is a single or team-based game, with the focus upon more personalised actions and reactions. As befitting such a game, the actions available may be varied for each figure. Turns are conducted in a series of phases, with Movement, Magic, Attack and Morale. Each phase is explained using a clear set of rules and using pictorial examples. There are also 6 scenarios included to cover adventures. However, one aspect that is missing is the ability to advance your team forward from game to game, a campaign system to let you progress your characters as you go along.

The Conquerors rules are focussed upon the actions of leaders and regiments. This is a ‘rank and flank’ style game, with figures based upon individual bases but ranked up in ‘blocks’. Consequently, the rules for Movement are focussed upon manoeuvring whole groups of figures rather than singles, although single character models, large models and monsters are a part of some units. All of these manoeuvres are explained using text and diagrams, including charges, slides, reforming and more. The Magic and Attack phases are more generalised than the skirmish version of the game, with shooting, close combat, methods to resolve the effects and consequences in terms of morale, panic and rout. There are also 3 scenarios included, standard fair, but once again, no campaign system.

The next two sections deal with a potted history of the fantasy world setting, including a map with a fairly familiar layout. After this comes army lists for the 7 main factions in the game universe, ranging from the chivalry of the Albion lands through the Living Dead, Steel Horde Orcoids, to the Elven folk of Alfheim. The army lists focus upon the stats for each of the troop types, with the points or ‘coins’ cost for each type, plus basing advice and equipment options for the Adventurer and Conqueror versions of the game.

The book also includes a few pages of photocopiable resources, including Magic Spell cards and Roster (rooster!?) sheets. Interestingly, for such a simple set of rules, there are no reference sheets, even though these are mentioned as being useful in the introduction.

This is a well laid out book, with rules and core concepts which bear more than a passing resemblance to certain games of the past. However, some aspects of the rules appear to be lacking, such as campaign rules to complement each version, which would encourage players to stick with a team or regiment.