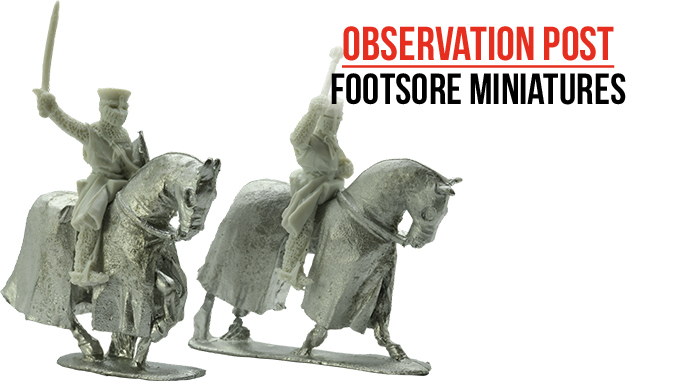 After having been suitably impressed by the first wave of Barons’ War figures from Footsore, I was looking forward to getting my hands on ‘wave two’ to see if this second tranche lived up to expectations.

I was handed nearly 30 figures in total, a cross section of those being made available in wave two, and divided between packs of: Spearmen, Peasant Levy, Crossbowmen, FootKnights, Footknights with Great Weapons and Mounted Knights.

Anyone new to this range should note we are looking at models designed with the Barons’ Wars of 13th Century England in mind, although anyone with an interest in the medieval period from the late 12th to early 14th century in Europe should definitely take a look at what’s on offer.

All the figures I was given for review are made of a high quality white resin; Footsore make some of their figures available in resin, others in metal. These boys were very well produced with few tell-tale resin blow holes and a very smooth finish, apart from the bottom of the bases, many of which had very big ugly chunks of flash on which I had to wrestle with to remove, breaking one of the models in the process.

Look at the face on that! Great expression on these figures across the board, as exemplified by the grimace on this crossbowman’s face.

It’s always nice when the weapon, in this case a separate crossbow, fits neatly into its intended position without the need for cutting, filing or even gluing.

These lightly armed soldiers would have been prevalent in any army of the period and whilst I’m not a big fan of drilling tiny fists to accommodate the metal spears (provided) it does mean we get some very animated poses and, when done well, secure weapons.

Once you get deep enough into the rabbit hole of medieval military study you will need to pick sides on the “did peasants fight?” debate (along with What actually is a peasant? What were they armed with? How many fought etc. etc.) Some say they did and some say if they did they certainly weren’t armed with agricultural tools like the man above. But, as I say, its debatable and quite rightly wargames tend to be liberal with their idea of who took up arms in their quest for different ‘troop types’.  If peasants did fight, or if you want them on your tabletop, whatever – they should certainly look like these fellas who appear to have just walked off the pages of The Luttrell Psalter – the sculptor having managed to really capture that fashionably illuminated manuscript look.

Included in the photos below is a comparison shot of a Footsore Peasant Levy figure with a (painted) Crusader Miniatures peasant of the same period.

Bundling together all the figures that fall under the banner of ‘knights’, we have some great looking chaps clad in various armour of the period (the ‘Knights with Great Weapons’ are sporting a cross-section of different great helms) and armed with an array of weapons, including a falchion and, a particular favourite of mine, the footknight charging with what looks like a French Vougue.

Included in the photos below is a comparison shot of a Footsore Footknight with a (painted) Crusader Miniatures dismounted knight of the same period.

I’ll leave the writing here so you can focus on the photos. Suffice to say this is another great ‘wave’ of figures in the Barons’ War range, well worth checking out by those already into the period and offering the potential to draw in many more.

Watch out when removing the chunky flash from the bases!