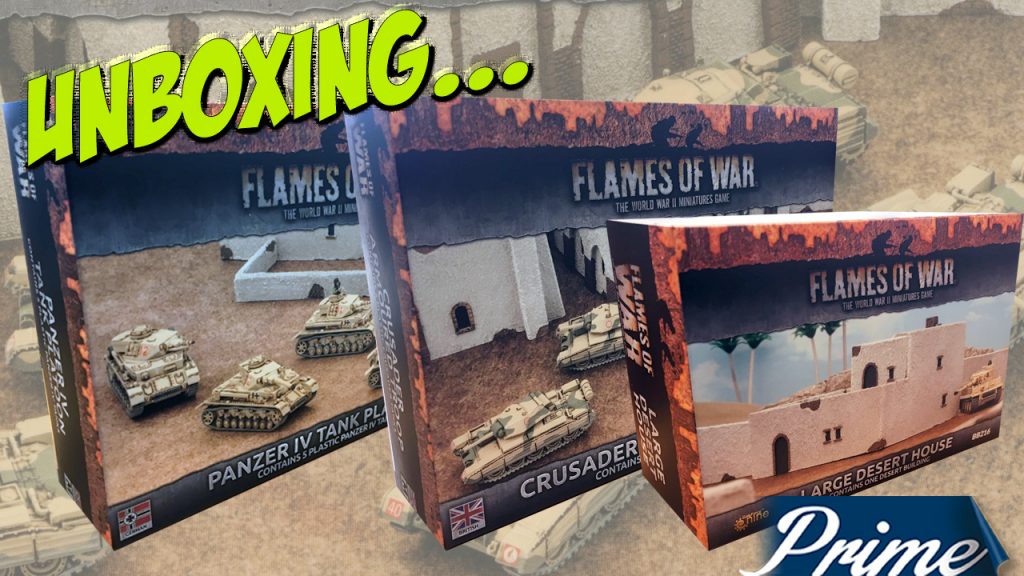 Since the release of the Flames Of War 4th Edition rules, a number of new items have been made available. The Desert War continues to be the main theme, with books and two starter sets for the Mid-War period. We now have the next round of releases, adding more tanks and some terrain to the mix.

The Crusader Armoured Troop consists of enough plastic parts to construct five of this famous British and Commonwealth workhorse of the desert campaign. With its powerful engine and sloped armour, the Crusader was able to get to where it was needed rapidly, and could go ‘toe-to-toe’ with many of the tanks fielded by the Axis powers.

Each sprue allows you to create either a Crusader II sporting a 2-pounder gun, an infantry Close Support version armed with a 3-inch howitzer or a Crusader III with its 6-pounder gun. There are also two turret variants to reflect the change from the Crusader II to the III. A sprue of tank commander ‘half figures’ is provided for each vehicle, plus a decal sheet and unit data cards.

Not to be out-done, Rommel’s Afrika Korps receive reinforcements in the shape of the Panzer IV Tank Platoon. This was a fairly heavily armoured tank for its time. It could be relied upon to be able to engage Allied tanks with some considerable success, especially when fielded with the ‘long’ 75mm gun.

Once again, we have five sprues, allowing you to create five tanks. There is a choice of armament, either the ‘short’ or ‘long’ 75mm gun. The ‘short’ weapon would perhaps be more suitable for the early version of the tank, with combat experience against the Russians in 1941 showing that the ‘long’ 75mm was more able to penetrate armour. A tank commander sprue, decal sheet and unit data cards complete the set.

Lastly, we have the Large Desert House, released under the Gale Force Nine label. This is a three part pre-painted building consisting of a ground floor, upper floor and a roof. Made from a durable resin, this is a typical building found in the North African desert or further afield. The walls have a rough texture consistent with the construction style used on the real versions and have some nice details, such as missing areas of plaster that show the mud bricks. Ready for use straight out of the box, this is a quick way to add terrain to your tabletop.

These boxed sets are up to the usual high standard that may be expected from the people behind Flames Of War. Additional tank support is always useful, and the high quality of the plastic kits means you can add to your forces with style. In addition, the range of terrain accessories from Gale Force Nine allows you to add authenticity to your tabletop. A great set of releases, with no doubt more to come.