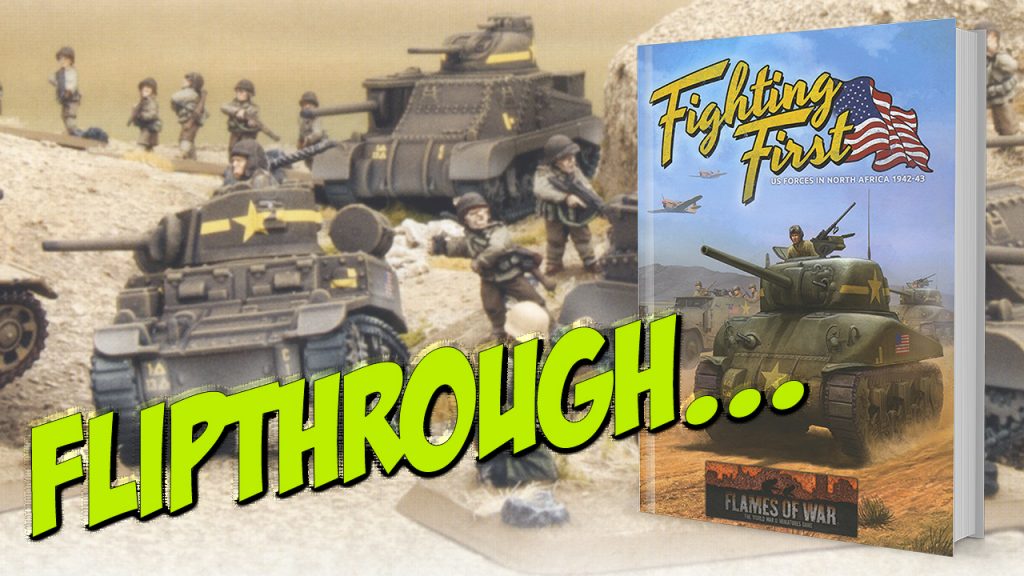 This new supplement for the Flames of War Version 4 rules introduces the US forces to North Africa during 1942 – 43. There are a number of options for players looking to field this well equipped but inexperienced army in their games.

The rules begin by offering a brief introduction to the forces that arrived in Tunisia and the Special Rules that should be used with them. They then go on to set the scene and offer accounts of some of the main battles which US forces took part in, complete with descriptions and suitable maps.

There is a handy guide to the various armoured vehicles in the Know Your Tanks section, followed by a full breakdown of the 1st Armored Division as per the Flames Of War rules, with a look at the 1st Armored regiment, and the stats and rules to place a M4 Sherman Tank Platoon on the tabletop.

Having started with the latest design of tank, the supplement brings in earlier designs, such as the M3 Lee at company and platoon level, again with suitable stats and rules. Having dealt with the fully armoured might of the US Army, the next step is the supporting infantry, in this case the Armored Rifle Company and the platoons that are a part of it. We then move onto the ‘leg’ element of the unit, the 1st Infantry Division, known as the ‘Big Red One’, and the rules for their platoons.

There are details and rules for the M10 Tank Destroyer and the elements which make up a typical company, plus support units in the form of fighter-bombers, anti-aircraft and artillery units.

As always, there are some clear and concise, step by step painting guides for both armoured and infantry miniatures, always useful.

A high quality product from Battlefront as always, with exactly what is needed to aid in the creation of a US force for this theatre. There is also a wealth of historical information and maps in the book, making it useful as a browsing guide to this part of World War Two.