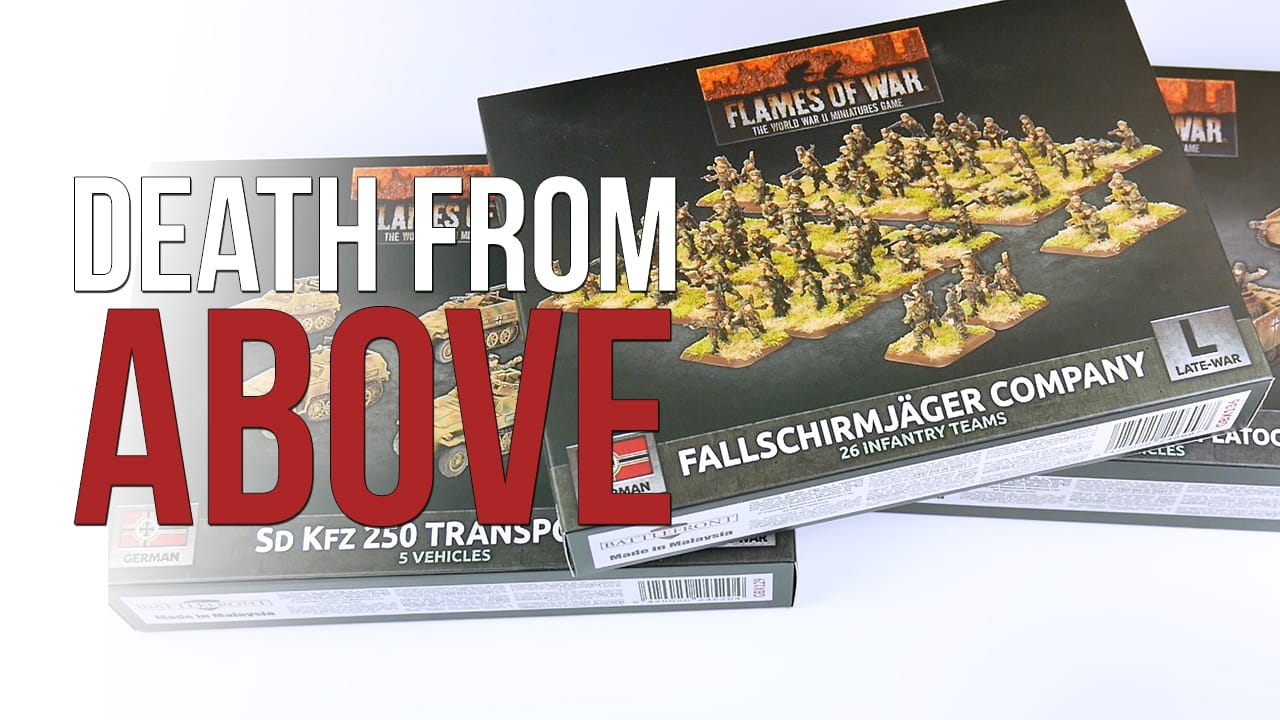 Battlefront continue to offer a range of new and re-packaged items to support their Flames of War rules system.  Some of the most recent offerings are for the Axis forces, most particularly the (in)famous German paratroopers, the Fallschrimjäger.

Rather than being based upon the Early War sky warriors of the Blitzkrieg-era, we have unit and command cards for the Mid-War German and Italian Airborne Forces and new figure releases for the Late War warriors who were used as Elite infantry in a number of theatres.

The Death From Above card set contains 21 Unit cards and 24 Command cards for use with Mid-War German and Italian Airborne forces for the period 1942 to 1943. The set also includes a 31-page softback book which offers full game details for the forces mentioned.

The book begins with details of the creation and main operations that the German and Italian paratroop forces took part in, including service in Egypt, Sicily and Italy and the Eastern Front.

The German Fallschrimjäger section deals with the basic organisation and game stats for the glider-borne and paratroop trained soldiers, complete with game stats for a basic squad, a company and all the support elements that may be fielded.

The Italian parachutists are covered in a similar fashion, with plenty of game and historical information for this tough group of fighters.

The Unit cards cover the same ground as the book, whereas the Command cards focus upon the unique abilities, famous commanders and characters and more for both German and Italian forces.

The Fallschrimjäger StuG Assault Gun Platoon contains 5 plastic kits, with optional parts to create either a StuG with a 7.5cm gun or a StuH 10.5cm main weapon. There are also Unit cards, a Tank Commander sprue and a decal sheet.

The last box is more generic, being suitable for most Late War German forces, but is perfect for use with the Fallschrimjäger infantry company. This one contains 5 plastic Sd Kfz Halftracks, with optional parts to create either a machine gun or 3.7cm gun armed vehicle.  The kit also comes with crew sprues, plus unit cards and a decal sheet.

Like almost every Flames of War product, these are well-designed and easy to use, with just the right amount of ‘extras’ that makes them some of the best looking 15mm products on the market.