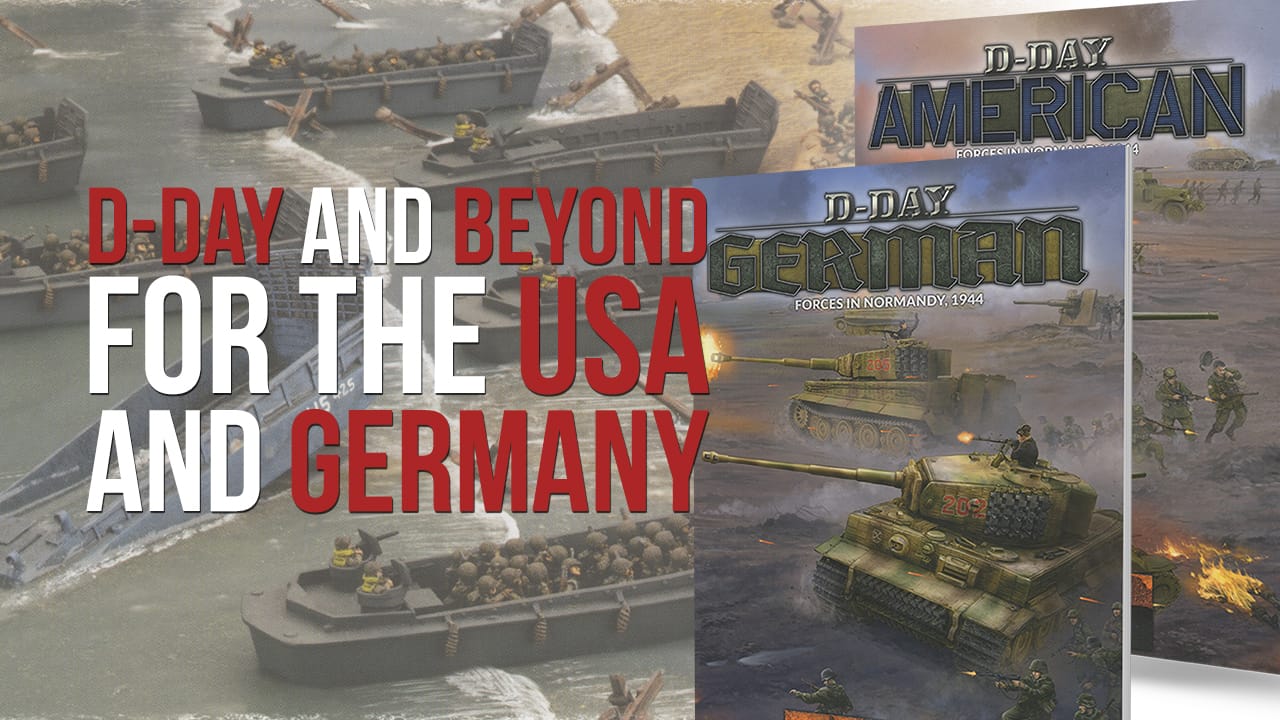 Battlefront have produced a number of supplements and figure sets to tie in with their current focus upon the Late War period, most notably the D-Day landings and beyond. To that end, they have released two new supplements for the American and German forces.

The American book begins with a summary of all the Special Rules relevant to the various American forces, then offers an overview of Operation Overlord, complete with the main aspects undertaken by US forces. After a handy example of the armoured vehicles available, this comprehensive book takes you through the various infantry options and offers a visual on the basic organization of a force for the D-Day landings in terms of the Flames of War methodology.

The book does a great job in covering a lot of ground very simply. Ambitious in scope, the aim is to cover every aspect of the landings, from the paratrooper and glider-borne assault, to the arrival of the special forces and engineer sections on the beaches. Each troop type has an account of a named unit, plus the organisation and in-game information for the men, equipment and support assets available to them. A really nice touch is the use of graphics which depict the main landing areas, plus the set-up of a typical beach landing assault group in their landing craft.

The book moves on to cover the main units who were operation on D-Day, with a brief history of each one, followed by the usual comprehensive breakdown of each unit option with in-game stats and information. The list covers veteran and new infantry units, tank and artillery support, the operations carried out post-D-Day and a number of variants of the standard armoured vehicles, such as the Sherman tank, M3 half-track. M5 Stuart. M10 Tank Destroyer and M12 155mm mobile artillery. Other new unit options include the L4 Grasshopper light aircraft as an artillery spotter and the P-47 Thunderbolt in a ground attack role.

The remainder of the book focusses upon a series of battle scenarios, part of a linked campaign that emulates aspects of the landings. There are rules for the different landing types, from parachute drops to glider landings, different types of terrain and the relevant rules, full scenario set-up and special rules which apply, rules for the perils of amphibious assaults, rules for typical beach obstacles and a comprehensive set of in-game stats for the German beach fortifications on the day.  Sets of photocopiable markers are included as a part of the supplement.

The German book reflects much of the same format of the American one. We have the special rules, overview of Operation Overlord, basic tank recognition, types of infantry, basic force construction, etc. Troop types include the basic beach defence troops, plus the better equipped and trained Fallschirmjäger, including the attached STUG tank destroyers.

The familiar format continues, with campaign maps and graphics, and information on the heavy tank and Panzergrenadier assets which fought against the Allied breakout. Famous units such as the Panzer Lehr are detailed, with their armoured might and supporting SD KFZ 251 half-tracks, in variant guises.

An example German force is shown, before a suitable painting guide and a number of battle scenarios are offered, to form a linked campaign which partially mirrors that of the American book, albeit with a much more defensive angle.