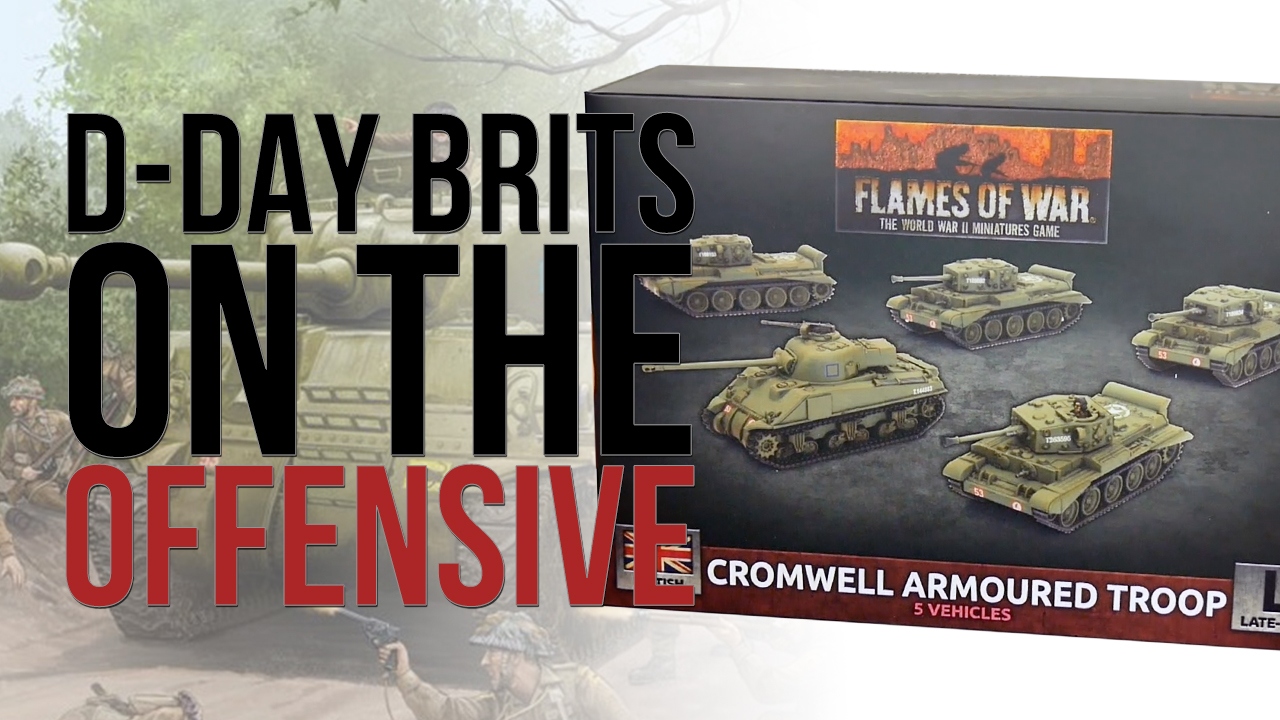 In support of their recent D-Day British: Forces in Normandy, 1944 book for Flames of War, Battlefront have re-released their plastic Cromwell tank, paired four them with a Firefly and released this new ‘Armoured Troop’ boxed set.

The packaging for Battlefront products is always appealing and this chucky, moody box invites us to look at the ten frames inside.

Not for the faint hearted, you are left to your own devices to sort out ‘what’s what’ once you pour or pluck the high quality plastic frames out of the box.

Four of the pleasantly coloured green frames contain the hull, guns and some of the stowage for your four Cromwells, whilst another four frames feature the tracks, turrets and more tank paraphernalia.

As with most Flames of War kits it is assumed the purchaser has some knowledge of the subject matter as there is no information on what ‘that little box’ is or what ‘that wheel’ does. There is however a guide on the box as to what goes where, which tries admirably to provide fitting, and variant, instructions.

This box can actually be used to create a Cromwell Armoured Troop or a Centaur Support Tank Platoon. The key difference between the two being the Cromwell was armed with a 75mm gun and the Centaur a 95mm. To add a bit of confusion, the Cromwell CS variant was also armed with a  95. I think the photos of the Cromwell CS and Centaur on the back of the box are designed to show this, although two identical photos had me scratching my head at first.

Along with the eight Cromwell-come-Centaur frames there are also two frames containing enough parts to make one Firefly tank. You are on your own with regard to the assembly of this vehicle, although you will find a comprehensive guide on the Flames Of War website.

The tank command frame makes up the last of the plastic in the box – for those of you wanting HQ vehicles, There are also Unit Cards which cover all of the fielding options available for the vehicles in the box.

Flames of War vehicles are great, they go together real easy, are manufactured from high quality material and have the right amount of detail for wargaming. This boxed set contains parts that have previously been available elsewhere in other guises, but for anyone looking for four 15mm Cromwells (or Centaurs) and a Firefly – Flames of War players or not – look no further.