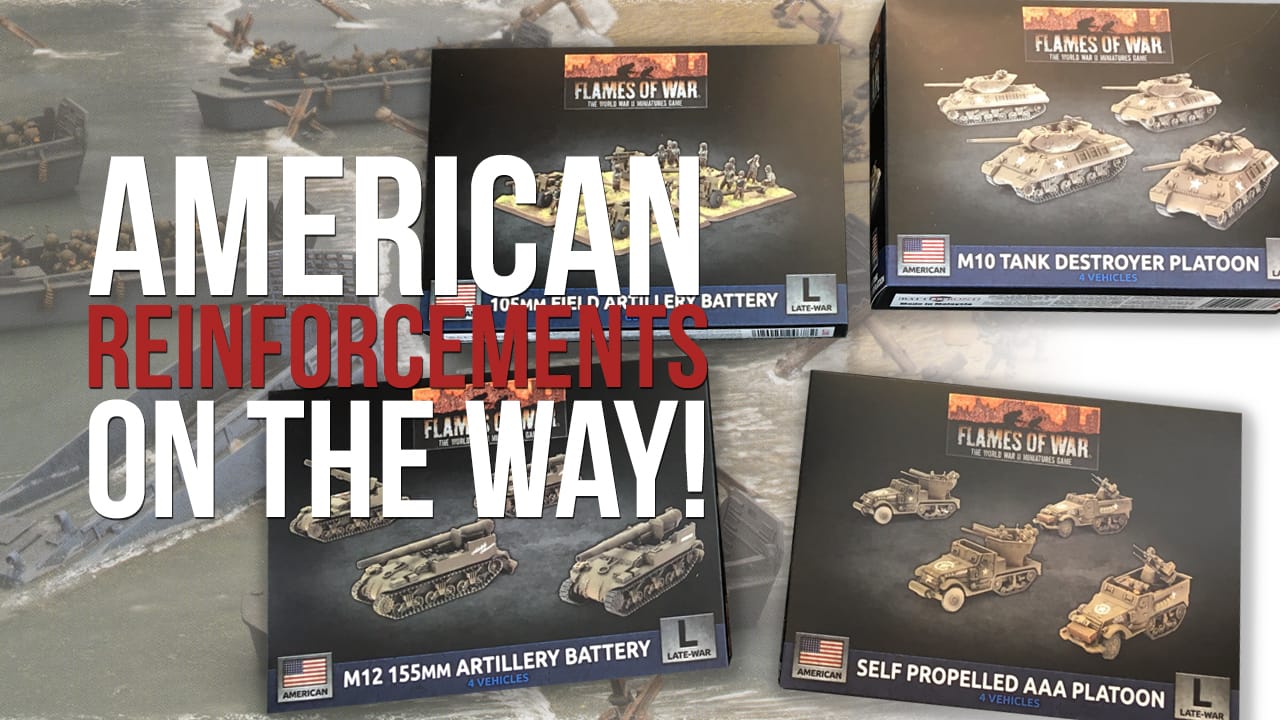 Battlefront have created a number of new and re-vamped boxed sets for the Late War period. Here we are going to look at some of the new American sets, which are based on units that saw action on and around D-Day.

Firstly, we have the new M12 155mm Artillery Battery, which contains four resin and metal castings of this variant on a Sherman chassis. Designed to keep pace with the advance of the armoured infantry and vehicles, these weapons were able to bring a large amount of fire to bear on the enemy.

Next, we have more static artillery support for the American advance, this time four 105mm Howitzers to form a Field Artillery Battery. Staying behind the frontline, these resin models represent the static support assets who can drop a heavy barrage across a wide area or with pinpoint accuracy through using suitable spotters.

And that artillery spotter or Observation Post is covered by our only blister pack ‘box’. The L4 Grasshopper was a light aircraft equipped with a radio and crewed by a pilot and observer. Capable of flying very low and completely unarmed, this reconnaissance aircraft was also used by senior officers and VIPs looking for a close up of the battlefield. This resin kit contains one miniature, in 1:144th scale as opposed to 1:100th.

The Normandy campaign also saw the use of a number of medium and heavy tanks by the Germans. As many of these had thick armour, the Americans came up with an armoured vehicle specifically designed to deal with them. By mounting a 3-inch gun in an open-topped turret, on a Sherman chassis, they created the M10 tank destroyer. This boxed set contains four new plastic kits, enabling the gamer to create a platoon of these hard hitting tanks.

Of course, whether static or mobile, artillery and armour is vulnerable to possible air attack. Although the Allies enjoyed pretty much total air superiority in Normandy during and after D-Day, there were still some Luftwaffe air assets. To guard against such an air attack, the Americans fielded mobile anti-aircraft guns in the form of the M15 and M16. Mounted on an M2 half-track, the M15 carried a 37mm gun and a .50 calibre machine gun. In practice, the 37mm gun was used more as a support weapon for infantry advancing against fortifications. Consequently, the M16 was armed with quad .50 calibre heavy machine guns, able to throw a swarm of lead at any ground or air target. The boxed set contains two of each of these vehicles, in the form of metal and resin kits.

All of these sets come with a set of Unit Cards with the relevant game stats and some come with decals. These sets are either brand new or replace older versions of the same. Couple these five items with some infantry and M2 half-tracks, and you’ve got the basics of an armoured rifle company or the core of an armoured company with a few M4 Shermans. Good quality kits, easy to assemble and with supporting game information, these are useful for any 1:100th scale gamer.