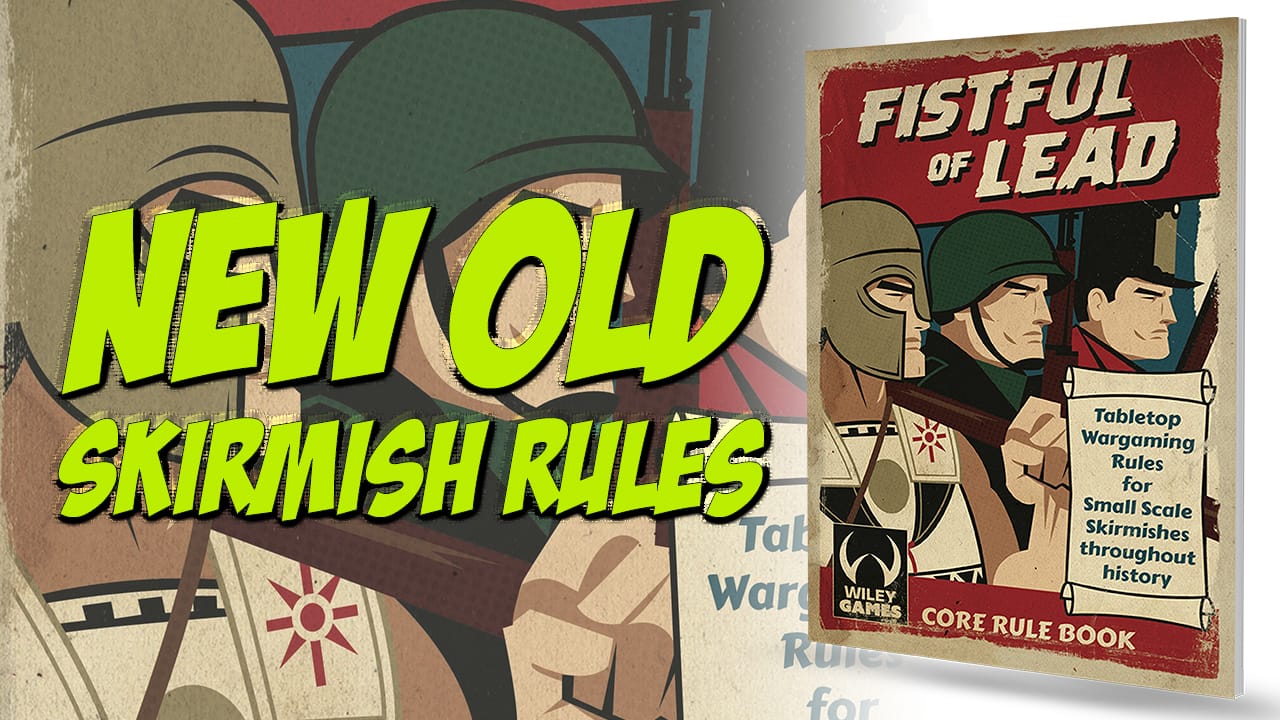 In the great pantheon of gaming rules, it is inevitable that we’ll miss out on a few. However, Fistful of Lead by Wiley Games looks like one of those we should learn about and share. Starting life as a set of gunfight rules for the Old West about 18 years ago, they have morphed into a whole variety of specialist rulesets. The print version of the book is 52 pages long, using US Letter format and a top-quality softback. Designed with the use of 5 or 6 28mm miniatures per side, the game can cope with two to six players in total, using a ten-sided dice.

The book begins with a brief introduction to the ideas that underpin the rules. A useful guide to the equipment and set up needed for play which has you ready to game within a few minutes.

Each model may take two actions per turn, which are partially defined by a list of examples but could actually cover a whole host of activities.

Textual and pictorial examples are used to define movement, cover, shooting, etc. The weapon tables cover a number of generic types, from Spear and Bow to Rocket Launchers and Laser Rifles.

The close combat rules continue the simple but effective motif found in the rules, dealing with pairs of combatants up to multiple fighters.

The effects of wounding upon a model’s abilities are discussed in detail, making for an effective and quite characterful set of results. By rolling a D10, the result of a wound is either Shaken, Wounded & Down or Out Of Action. Models can have up to three wounds inflicted upon them before they succumb but can suffer a number of statuses after each one. Wounds may be recovered from, by activating the figure as usual but then spending time dealing with wounds.

A two-page Example of Play is simple to follow, and very useful. Having dealt with the basic rules, there are Advanced Rules, including undertaking tasks beyond the realms of combat, using a task difficulty roll.

The Building Your Team section enables players to put together their chosen models as a playable group. A team consists of a Leader, a Specialist and up to three Regulars. In addition, Grunts may be added to your team, although these are less able than the other models, only using a D8 to gauge the result of their actions.

Grunts come in groups of three, and only have 1 wound. Each member of a team has their statistics, weapons and the all-important Traits recorded upon them. Traits are the specialist skills and abilities that players may choose from to create unique characters. These may be both positive and negative and may be balanced against each other: if you take a negative trait, then you may take an extra positive trait for ‘free’. Traits may also be allocated to the Team, and there is a sample crew offered as an example.

The properties of each type of weapons, whether ranged, close combat are otherwise, are further clarified, adding extra layers to the choice of weapons. A handy approach is the decision to juxtapose modern and historical weapons against one another, allowing knights on horseback to engage World War Two troops or similar. This ‘mix and match’ approach is rare to find in most skirmish games.

After creating a team, rules exist to progress it through the course of a number of games, using Renown Points. A number of scenarios are presented, taken from a variety of genres. There are also pages of sample teams taken from both historical and fictional origins.

The simplicity of the games system allows the inclusion of a one-page reference sheet in the book.

Over the years, the core rulebook has seen a number of additions, most notably a set of supplements which focus upon a particular genre, thereby saving the ‘time poor’ gamer the need to work out everything themselves. So far, there are:

Quite frankly, we wish we’d known about this set of rules long ago. Fast, easy to use, but with a low figure count and depth of gameplay, Fistful of Lead and its supplements have a great deal to offer those gamers looking for a tabletop adventuring system. It is adaptable, covers a variety of genres and could be used again and again for not only skirmish gaming but the type of ‘games within games’ where small groups of warriors undertake the type of missions legends are made of. Equally, the presentation of the books evokes the comics, movies and pulp literature that is so popular with those gamers who enjoy narrative adventures and campaigning.

Although the rules may have been around for a while, they are pretty much ‘on trend’ for the current crop of skirmish-style rules, whilst also having been thoroughly playtested by legions of gamers, something not always seen amongst more recent releases.

For more information, go to https://wiley-games.myshopify.com