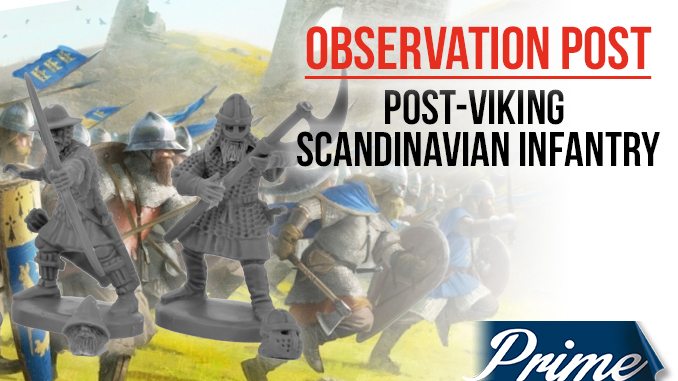 Due to be released in April of this year, these upcoming plastic miniatures represent something fairly unique, medieval era Scandinavian Infantry suitable to represent a number of different nations.

Some of the heads on the sprue give clues to the heritage of these miniatures, as does aspects of the weaponry and clothing. However, these are very much ‘medieval’ miniatures, with the use of chainmail and certain other clothing, helmet and armour details.

There are 25 miniatures in total, with five of the same sprue being supplied in the box. However, there are ten heads per sprue and the option to arm the figures with a variety of weapons, from swords and morning stars through bows, double headed axes, glaive-like ‘axes’ and even a Dane axe. There are also a number of shield designs, with traditional round, kite shaped and a ‘heater’ shield.

What this all means is that no two figures need to be exactly the same or in exactly the same pose, demonstrating once again the flexibility of the plastic multi-pose miniature. These figures allow you to take on Russians or re-fight battles between the various Scandinavian nations, including the Battle of Fotevik, part of a civil war between the Danes.