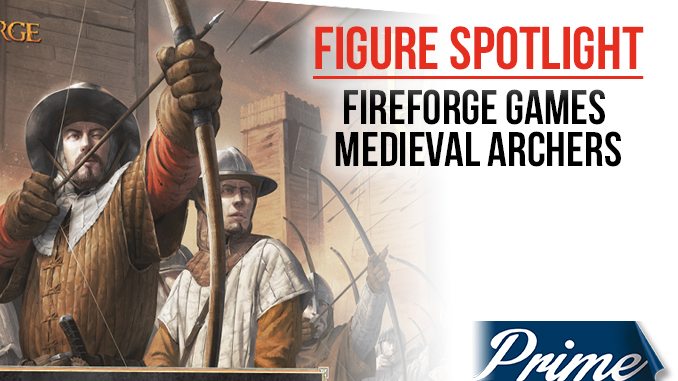 Fireforge Games continue to expand on their already impressive range of medieval plastics with this latest set of 24 models – ‘Medieval Arches’.

Each sprue contains enough bodies and arms to make eight soldiers, with 13 different heads to choose from, so you can pick and choose what heads to use/keep as spares.

The pack is billed as “arches for the 12th – 14th Century”, that’s quite a span of history and in 300 years the look of the European archer changed significantly. This set endeavors to cover quite a bit in the way of different dress styles from that period, so we have scale armour, quilted aketons and belted tunics as well as multi-period head gear; like the flat-topped helm which was worn from the late 12th to the early 13th Century and the kettle-helm which became pretty standard thereafter.

The bows themselves are of only slightly varying lengths with differing curves, and frankly look somewhere between the later 6’ longbow and earlier 4 – 5’ bow, which (with a liberal outlook on such things!) means you could use them for either.

The figures line up very neatly but retain an individual, characterful look. Whilst the mish-mash nature of the set excludes them from my own set battle later medieval armies, they will certainly be a welcome addition to any skirmish level forces for Lion Rampant and Burn and Loot.