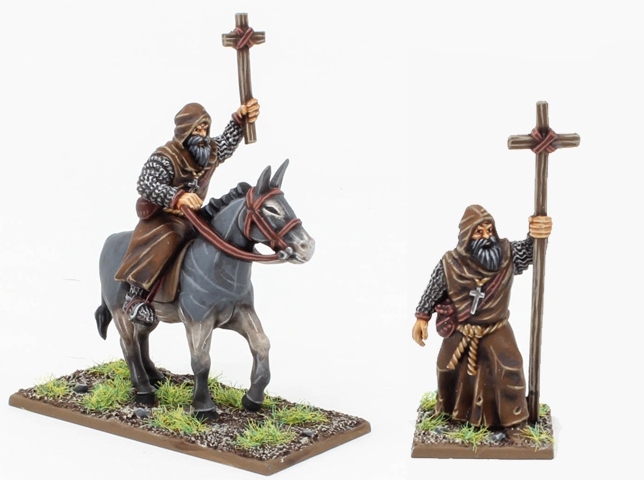 Mention monks to Wargames Illustrated’s first Editor Duncan and he’ll tell you “there’s no more versatile a mini to put in your collection!”

Well, we’ve paraphrased that. What he’ll actually do is eruditely extol the virtues of them, over the course of several pints, until any counter-debate you might throw his way is null and void … But his point stands – a good monk model is really relevant to a great many of wargaming’s preferred periods and areas. Changes in fashion and style haven’t exactly swept through ecclesiastical circles over the centuries – one brown robe is much the same as the next!

So, we at Wargames Illustrated might get more excited by a new monk model than most, but you’ll see from a glance that this one from Fireforge Games, coming mounted and on foot, is a very nice example. Which it should be, as it is a somewhat costly £13 ($17 US).

It is advertised as a Resin Forge Cast; we think that just means it’s made from resin and has been given a fancier sounding name. Unless Fireforge have invented a new technology heating resin will do nothing but badness to the end quality of the casts! It seems to sit somewhere between 28mm and 32mm scale, about 30mm to the eyeline, but that would still fit well with either of those size ranges as a slightly tall or slightly short monk.

With mail under his robes and a chunky wooden cross held aloft, he has an imposing look; you could certainly make him into a ‘warrior monk’ if you desired. How the mounted version’s donkey would fare in a battle situation is up to you to decide, but we rather like the way it looks, bringing some humbleness to the model.

The monk on foot comes in three parts and the mounted version is seven. Nothing too tricky with the build process, detail comes through well on each part, the quality of casting is good, but we need to highlight a couple of issues. The parts aren’t the greatest fit – this seems to be down to the actual cutting of the pieces rather than a fault with casting itself. The head on the donkey left some big gaps behind it that will require filling.

Also, probably due to this being a digital sculpt (to make the duplication of the same character in multiple poses easier), some of the edges lack the sharpness and definition that you might find in a traditional sculpt. The whole model is very slightly ‘soft’ looking, but it’s not the most serious problem. Overall, this is a monk that can sit happily in your collection for many years to come!