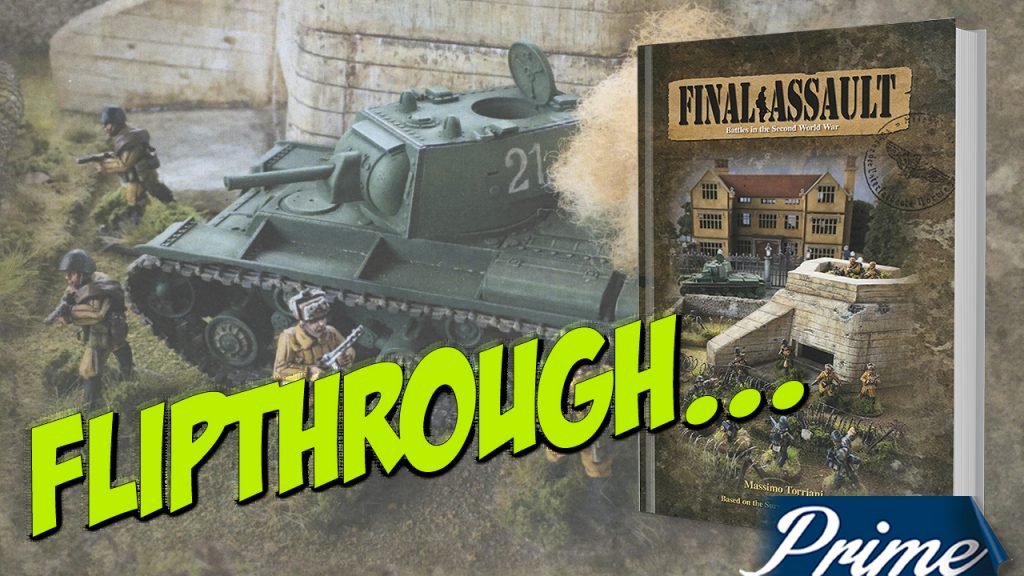 Final Assault is a set of Second World War rules which allows players to field entire platoons of infantry and squadrons of tanks using the Survival Heroes system. It is fairly comprehensive and applies both generic and specific stats to a variety of its mechanics.

The book begins with an outline of the key components used in the game, including the markers and templates required and provided on a separate card. The structure of a game turn and the mechanics are clearly laid out within the rules. The system relies on you comparing the roll of one or more D10 to a reference value (e.g. if the Tactical Value is 7, you’ll need to roll 1-7 on the d10).

The clarity of presentation continues, with the rules for moving foot figures, plus the impact of terrain on the game in terms of movement and cover. The need for cover is clarified in the infantry fire section, which is very detailed and extends over a number of pages. The range of possible outcomes are fairly long, but make for a level of realism that other WW2 games may be lacking.

The weapon tables are also comprehensive, covering the key combatants in the European theatre and the distinctions between the different weapons that were used, as per the rules. The game stands out for its attention to historical detail, and highlighting the differences between the various weapons of the period, with regard to their range and firepower. The tokens required are as shown on the card insert, plus there is a removable set of summary sheets that aid gameplay.

The level of detail continues with rules for communicating with support elements, then melee combat and the consequences of units taking casualties. The rules also encompass one of the main facets of combat in World War Two, the use of vehicles, especially those with armour and weapons, emulating the stages of the infantry rules with movement, firing and assaulting vehicles. Players must pay attention because they can react to their opponent’s moves, but despite this an average game will only last a couple of hours even if you use four or five vehicles and fifty infantry.”

The game uses a points based system for balance, recorded on roster and datasheets, with examples provided. There are also optional rules provided to add extra aspects to the gameplay. The use of these datasheets helps to speed up gameplay, allowing for the rapid checking of key characteristics, thereby encouraging the use of larger units and plenty of vehicles.

A comprehensive set of rules, but an easy to follow system. The rulebook is easy to use and contains examples to aid in learning the rules, with a useful set of summary sheets and all the tokens provided.