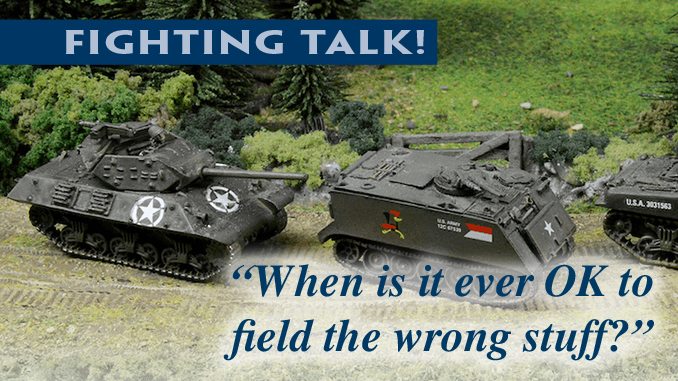 Pete Brown muses over when, if ever, it is OK to use the ‘wrong’ figures on the wargames table.

All this week my mind has been plagued with one burning question. Is it wrong to want hussars?

Let me explain. Recently I have been collecting miniatures for the Second Opium War in China, which took place between 1856 and 1860. Full details of the British forces are available from a number of sources but suffice to say it involves both infantry, cavalry, artillery and a small naval force. Coincidently, the Perrys do some lovely British figures for their “British Intervention in the American Civil War” range which are wearing the 1860 style uniforms and hence are ripe for plundering to staff my British force for China. Amongst the figures produced by the Perrys are British hussars. They are lovely figures, but unfortunately there were no hussars deployed as part of the expeditionary force to China. And so I return to my question. Would it be terribly wrong if they appeared in my game?

Whilst it may appear frivolous, this question actually goes right to the heart of wargaming as we know it. First of all, why do we use miniatures? Why not simply blocks of wood with “Panzer II” written on them, or flat counters or pieces of paper? The answer, I would suggest, is that we enjoy the modelling aspect of the hobby and want to collect and paint miniatures which are as close to their historical counterparts as they can be. When collecting British infantry for Waterloo, for example, we are sure to buy those in Belgic shako rather than the stove pipe shako of the earlier Peninsular campaign. Similarly, when playing games set in 1940 we are careful not to use tanks or AFVs that did not appear until later in the war. Pretty obvious stuff, you might say.

So why then, having gone to all the trouble of painting and often converting our models and miniatures to represent, as far as possible, the regiment or vehicle it is supposed to be, would we use the wrong stuff?

OF VALENTINES, MATILDAS AND CHURCHILLS
Let me give you an example. Some of our club members recently went to a show where they saw a very nice World War II North Africa Desert game. The British armored forces included Matilda, Valentine and Churchill tanks. Whilst this is the sort of thing I would look at, appreciate and then drift on to the next game, to others in the club it was the cause of righteous anger. Apparently, and I am no expert, the Matilda was superseded by the Valentine from late 1941. The Churchill arrived in time for El Alamein in November ’42 – but only six were present and by then all the surviving Matildas had been converted to ‘Scorpion’ flails. So whilst the possibility existed of an overlap from one tank to the next, the possibility of all three being present on a battlefield at once was non-existent. To some, this transformed the game into one of complete fantasy, to be ranked alongside a Lord of the Rings game or something involving Space Pixies.

Now I don’t know one end of a tank from another, so their exasperated cries of “Why would anyone field Vickers Mk VIs alongside Comets?” were lost on me. However, the infantry models were lovely, the terrain was very well presented and it was obvious that the owners had spent a great deal of time on it. Which then raised the question,
“Why go to so much trouble simply to get it wrong?”

But I guess we have all done it? At some time or other we have used figures or vehicles which have been “not exactly right” for the battle we are refighting. This sometimes occurs if we wish to fight a battle from a period we know well, but perhaps the uniforms changed slightly over the course of the war. For example, if your collection is Peninsular War British but you fancy having a crack at doing Quatre Bras, no one would expect you to start again and collect 1815 British when the only changes would be slight amendments to the uniform. Another good example is when you are attempting to put on a really big game, such as Blenheim, probably involving a number of different people’s collections, when sometimes “anything with a tricorne” might make it on board in order to make up the numbers.

OH THE SHAME!
In my misspent youth I once entered the Napoleonic competition of the Student National Wargames Championships with an American army of the War of 1812. I had spent a lot of time painting and collecting this army so you can imagine my horror as I unpacked it to fight the first game only to find that I had left all my skirmishing Indians and Davey Crocket style frontiersmen at home on the workbench where they had been drying after a final varnish the night before. One appeal to the organisers later and I was very helpfully furnished with some Indian skirmishers. They were, unfortunately, not of the North American variety but instead were ancient Indians of the type that would have fought against Alexander’s army in India around 326 BC. By the end of the first game I had explained to so many passers by and interested parties what these figures represented and how I came to be using them that I chose not to use them for the rest of the tournament, sacrificing quite a few points in my army rather than continue with the embarrassment. However, not everyone entering competitions is so exacting. I have faced a number of opponents at competition who will unashamedly declare that the troops deploying opposite mine are Imperial Romans, despite looking remarkably like much earlier Republican ones, or even that the light cavalry on my flank are actually heavily armoured knights.

Which brings me, in a roundabout sort of way, to the point of this ramble. When is it OK to use the wrong stuff? Is it ever OK or, as this is just a game after all, does it really matter? To answer this deep and rather philosophical question, I have developed a league table approach. I am sure many of you will not agree with it, but here goes.

FIRST LEAGUE GAMES
First of all, there are your Museum grade display pieces, such as the Perrys’ recent “Chunuk Bair” diorama (see WI334). These are usually not actually games but often static displays which are either designed to be permanent, such as in a museum, or set up by wargamers or modellers at a one off event. This is usually to help visitors visualise what the battle was all about, as with the TM Terrain and Perry collaboration, now housed at the Royal Armouries in Leeds, England (see WI336). Such dioramas are designed to inform the public and represent an accurate picture of the battle, and as such there should be no room for error. These really are the “premier league games” and should showcase the hobby to the best of our ability.

SECOND LEAGUE GAMES
In the next league are games put on at shows around the country. These are designed both for public consumption and to show off our talents to our peers. Whilst shows are generally good natured affairs, carried on with the same laid back approach that most people take to the hobby, anyone using incorrect figures or vehicles in their game is more likely to be subjected to tuts and quiet shakings of the head rather than being placed in the stocks. However, it seems to me that anyone attempting to put on a game at a show, in the full knowledge that it will be viewed by other gamers, is setting themselves up for a fall if they go on to use incorrect figures, vehicles or terrain in what should be a “showcase” event. In this league the old adage that “if a job is worth doing…” would seem to hold true.

THIRD LEAGUE GAMES
The next league is the equivalent of “Little League” or Sunday morning football: The Competitive game, either in an organised tournament or at a games day such as those organised by Wargames Illustrated. These events are invariably good natured but you are more than likely going to be playing against people you don’t really know. I am sure I am not the only one who has left a vital unit at home or suffered a transport disaster that left me a few units short of a full army upon arrival at the venue. I have also known players supplement their army with a few extra units drafted in from other armies they own just to make up the points values. I have no problem with any of this, having been a victim myself. If the substitute troops do not look like or are not based like the troops they are filling in for, so long as your opponent is aware of what they are then usually there should be no problem. However, if the army you bring is nothing like the army described on your army list then I have more of an issue. Republican Romans are not Imperial Romans whilst the chap who deployed Wood Elves as English Archers in one game I fought was just not trying!

FOURTH LEAGUE GAMES
Finally, there is the club game. This is the game put on for the enjoyment of our friends in the light-hearted environment of our home or club venue. In such a game, people are generally even more relaxed about what we can and can’t do on the wargames table. I have often refought battles of the Seven years War using my British and French collections when clearly Austrians and Prussians were present at the real battle, whilst on more than one occasion the use of barbarians of a number of different nations have been pressed into service to oppose the Roman legions. In these games, although we may be using incorrect figures for the fictional scenario we are playing, the figures and vehicles are broadly correct for the period they are meant to represent. If your club does not have a nominated Compliance and Enforcement officer, perhaps you can get away with a little more!
It may be possible in your club to admit that you have not got the right stuff but just want to play out a scenario or a battle which you think may be fun but is not worth the investment in time and money that would be required to collect it properly. In these games anything goes, with early war Germans fighting late war Brits, ACW Cavalry fighting FIW Indians or whatever takes your fancy. I once heard a rumour that underground clubs exist where people even play with unpainted miniatures…

Ultimately, we are playing games with toy soldiers with the aim of socialising and having fun, whether it is at a show, a competition or at home. With this in mind, maybe if we obsess about the using the “right stuff” we might lose sight of this. Having said that, if we routinely use incorrect figures, vehicles and models in our games then we might as well play with markers? What do you think? Should I go and buy those hussars now?